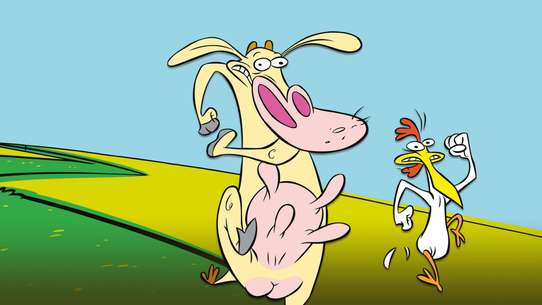 The BEST episodes of Cow and Chicken

The series follows the surreal adventures of a cow, named Cow, and her chicken brother, named Chicken. They are often antagonized by "The Red Guy", who poses as various characters to scam them.

Cow and Chicken play at the arcade. The Red Guy persuades Chicken to play his new video game. Chicken is placed in a special chair, and fitted with special goggles, and he finds himself, virtually in the video games. He then finds himself the victim of a bunch of killer daises.

Flem's Dad takes Chicken, Flem, and Earl on a camping trip in the woods. Cow shows up with Chicken's forgotten hairbrush, only to be kicked out by him, Flem and Earl. Flem's Dad then sings a ballad to the kids about a flattened cat, who can act like a frisbee, and cut things down like trees and trucks. Later that night, the kids find their cans of Sugar Frosted Weenies cut open by Sailcat.

Teacher is disappointed when the school's plastic surgery team has no championships, so she calls in The Red Guy, to be the new plastic surgery coach. Chicken and Cow immediately join the team, and are taken to the finals, where they must compete against real doctors, who are still in grade school.

Cow and Chicken decide to get on Canada's Funniest Home Vidiots; so they glue each other to their heads, and send the tape in. They then meet the host of the show, The Red Guy (who portrays Lance Sackless). After Cow and Chicken win the grandprize, The Red Guy trashes them with insults about how stupid they look, so Super Cow takes out The Red Guy.

Cow buys the new Piles the Beaver Doll, and takes him to the carnival with her. When he's catapaulted into the air, she then goes on a wild goose chase all over the carnival just to catch him.

Chicken finds a credit card as his ""free inside prize"". Dad tells him that with the credit card, he can buy all the neat stuff he wants. So Cow and Chicken run down to the weenie emporium, where he learns he can only buy products with the value of 25 cents or less. With that, he buys a stick of weenie bubblegum for 20 cents, then The Red Guy shows up to collect his 5 cent interest.

Chicken turns 11, and is allowed to operate the food catapault. So he feeds Cow with pork butts, but when his sleeve gets caught in the catapault, he ends up getting swallowed by Cow. With that, Mom and Dad take her to The Red Guy, who tries to get Chicken out of Cow's cavernous abdimen.

Cow and Chicken go to the arcade, and play the time machine. They find themselves back in a deserted time, where The Red Guy introduces them to the primortial soup. But when Cow accidentally drops her quarter into it, everyone in the present time has quarters for heads. Cow and Chicken must go back into time again to stop her.

After Chicken's beak is bruised by Dick, his school bully, Mom and Dad send him to karate lessons. Chicken takes up butt-fu from The Red Guy, but when Chicken still is unable to beat up Dick, Chicken decides to force a refund (with help from an invisible Super Cow).

Chicken rushes through breakfast, and accidentally eats a box full of coffee flakes. He then goes crazy and has trouble getting to sleep. On his third night of no sleep, Chicken then runs up the Empire State Building. Super Cow shoots him with warm milk, and Chicken finally falls asleep.

Cow and Chicken are sent to the copy room to make copies of the pop quiz. They then get carried away by making copies of their butts, and themselves: causing the copier to blow up. Cow and Chicken run down to the local officer supply store, while The Red Guy brings a copy of Chicken to life. The Chicken copy then causes chaos all over school, while Cow and the real Chicken try to destroy it.

Chicken starts to mess with a pricing gun in the super market, and then starts getting carried away. Soon, Cow and Chicken inevidibly have price tags stuck on them. Red Guy assumes they're for sale, and buys them...but doesn't know exactly how to put them to use.

Cow and Chicken mess with a Junior Chemistry Set, and created perpetual energy, a beam of energy that keeps on going forever. The Red Guy kidnaps Cow and Chicken to recreate the energy, so he can win a trip to up North without having to sell Military Scout Cookies. I Am Weasel: ""My Friend, the Smart Banana''

Mom and Dad are upset that Cow and Chicken aren't afraid of the dark, so they call in a specialist on fear: The Red Guy (who portrays Dr. Lackslacks). He tries everyway he can to make Cow and Chicken afraid, only succeeding in making himself afraid of everything.

Flem and Earl find themselves lost in the middle of an ocean near the equator. They fear their lives are short, and begin reminescing about their fun lives: home coming, water boys, mentally challenged, eating cheese in Yurp, running with the bulls in Pimplelotta, singing drinking songs in Germany, and having love for Cow. I am Weasel: ""I.R. Do""

Amateur director Ivan Panced (The Red Guy) hold auditions for the role of ""Pretty Little Girl"" in his new movie with the same name. Cow wins the role by being the only girl who can't puddle dance. Cow's performance is charming, and well as tear-jerking: the horror is yet to come as the cameraman discovers he forgot to put the film in the camera.

Dad is sick of his high-tech reecliner always malfunctioning, so he decides to dump it. Before he does, Cow and Chicken decide to see what it's like to sit in ""The Chair"". They, and they get stuck, and are taken away to museums, and in stolen vans, and finally back at home, where Dad waits for his ""new chair"".

Cow and Chicken's class takes a field trip to Folsom Prison. There, Chicken changes place with a prisoner, and causes riots by pantsing guards, and demands Pork Butts and Taters for lunch, while the prisoner, Rhode Island Red, pretends to be Chicken. Cow sees through this, and under Super Cow, returns Red, and rescues Chicken.

Cow wants to earn money to buy the new Crabs the Warthog Doll. So she gets a part-time job at the milk farm, where her milk is superb. Chicken decides to get a part-time job too, and is refered to the Chicken farm as a ""temporary employee"". I Am Weasel: ""I.R. On Sun""

Cow goes to Arkansas to meet The Red Guy, who is trying to become the King and Queen of Cheese. The problem is that his method of making cheese is sucking the cheese out of things such as buckets, water towers, weasels, haystacks, silos, grandmas, horses, dogs, lizards, hyenas, ducks, and now Cow. Chicken rescues Cow and the other animals, who then turn the cheese suckers to The Red Guy.

The Red Guy is sick of being foiled by Super Cow, so he opens up a laundrimat for super heroes, in hope to find out who she really is. It doesn't work, so he goes to Cow and Chicken's house, and kidnaps Cow. Chicken then goes to the rescue as Super Cow for her.

Cow has a new pair of glasses, and suddenly becomes the smartest person in school. Chicken decides that two can play at that game and gets glasses himself, but since he already has perfect vision, the glasses make everything look blurry. He soon becomes the new smartest kid in class. Because of his new intellect, he is placed in charge of tearing down the new ""dungeon"", which was really a new indoor swimming pool.

Chicken holds a yard sale, but when one of the price tags accidentally falls off the table and onto the yard, The Red Guy literally buys the yard. Mom and Dad expect Chicken to get the yard back, in which he does by having Cow play a game of one-shot battleship with The Red Guy.

Chicken, Flem, and Earl decide to sneak into the girl's bathroom during the middle of the night. With Chicken suited up, he goes behind the pink door to discover a cigar machine, a hair washer, and an enclosed toilet, where you can get a complete image makeover. I Am Weasel: ""This Bridge, Not Weasel Bridge""

Cow and Chicken's class go on a field trip to the Cometorium, where Chicken is bored stiff. After getting hit by one of Dad's golf balls (he was golfing right next door), Chicken hangs it in front of the telescope; soon, the whole town is in panic of the arrival of ""Dad's Ball Comet"".