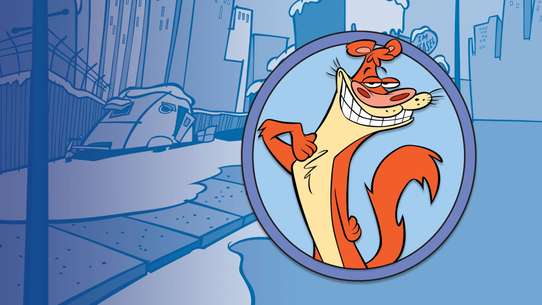 The BEST episodes of I Am Weasel

Every episode of I Am Weasel ever, ranked from best to worst by thousands of votes from fans of the show. The best episodes of I Am Weasel!

An intentionally famous genius, I. M. Weasel is envied by the his less-than-clever counterpart, I. R. Baboon. No matter what outlandish adventure I. R. Baboon undertakes, it seems that the wordly I. M. Weasel is there before him, winning the adultation of all. Such acclaim frustrates I. R. Baboon, often leading him to him to exclaim: "Why is always him? Should be I?". I Am Weasel started as the segment of Cow and Chicken but in Season 5 it became an independent show.

I.R. is jealous of his neighbor Weasel because he has a better wife, kids job and house than him. Red's role: A woman who says that she's I.R's wife.

Weasel and I.R. create their forms of life. Red doesn't appear in this episode.

Weasel is famous cowboy working in a rodeo in which Baboon is a clown. Cow and Chicken's teacher and her husband appear in this episode.

Weasel and I.R. are worker bees, and our red-butt baboon wants to do a honey dance like all the other bees, but it soon results in further problems.

Back in the medieval times, Weasel is a dentist with wizardry powers with Baboon as his envious nurse.

I.R. gets a bike for Christmas. Learning of his inexperience, Weasel tries to help him.

Weasel and I.R. are called in as replacement kids after a couple's real children go away to camp.

I.R. takes a driving test and Weasel is his teacher! I.R. drives through the city ""Miami Vice""-style and wrecks it in progress therefore failing the test! But Weasel later finds out that I.R. was coming to get a poetic license since he made a lot of rhymes during the driving test! Red doesn't appear in this episode.

I.R. destroys the Law of Gravity (literally), which causes all lawyers to float (since they are the only ones that understand law).

I.R. finds an abandoned baby and adopts him as his son. Red's role: Guy that is surprised that Supercow found him on an I.M. Weasel episode.

Now retired and living in asylums, Weasel and I.R. recall the days when they were young. Red's role: Also retired, lives in a Villians Retirement Home.

The Red Guy narrates the story of when Weasel and Baboon moved to Paris in 1909 to become famous artists.

Weasel and Baboon are on an expedition to capture a wild, dim-witted savage named Fred. When they manage to capture him, Weasel, however, cannot understand his unusual language.

Weasel's theory on monkeys typing Shakespeare goes wrong when almost every monkey involved walks out on him. However, he sees hope in the form of I.R. Baboon, who writes a book entitled "A Troo Storee," despite the fact that it lowers peoples' I.Q. level.

Weasel is the captain of his own comercial plane, and must take a bunch of people up a river with I.R. as his co-pilot. Red's role: Stewardess... oh, all right, flight attendant.

Back in Roman times, Weasel and I.R. battle each other as gladiators. Red's role: Emperor Gluteus Maximus.

Cow selfishly wants Weasel for herself so she fishes him out of the tv with a pie! But I.R. becomes very lonely without Weasel. Red's Role:Bearskinned rig who tells Cow how to get Weasel out of the tv and also the star of I.B. Red Guy.

Weasel and Baboon are ghosts, assigned to haunt the house of a washed-up movie starlet (played by the Red Guy). But Baboon keeps goofing up, and even Weasel is finding the starlet a hard scare. Red's role: A female movie star who Weasel and I.R. try to scare.

Weasel, I.R. and The Red Guy are believed to be the last beings on Earth, until they discover that everybodys been watching their show... where it turns out that Baboon is really the star!

It's the Middle Ages, and Weasel and I.R. are looking for a dragon to slay.

IR and Weasel go to a baseball game and Weasel wants to watch all of it, but IR will make sure that that doesn't happen.

Weasel works at a hotel as the manager, whereas I.R. is his incompetent bellhop. However, Weasel needs to rely on I.R's help when an acclaimed cannibal actor (The Red Guy) wants to eat him for dinner.

Weasel and Baboon are troops enlisted in the U.S Ground Force and must rescue a lone kitty stuck in a tree.

Weasel and Baboon are cave-men living back in the prehistoric times, while Weasel tries to invent new products to create the future.

Based on Batman, I.R. Baboon is the hero known as Baboon Man, whereas Weasel is his sidekick, Weasel Boy.