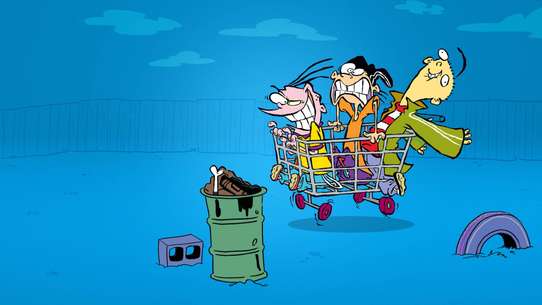 Three adolescent boys, Ed, Edd "Double D", and Eddy, collectively known as "the Eds", constantly invent schemes to make money from their peers to purchase their favorite confectionery, jawbreakers. Their plans usually fail though, leaving them in various predicaments.

Edd accidentally hurts Lee Kanker, making everyone believe he resorts to violence. He then makes mistakes during school hours which causes some of the kids to be hurt or injured. When all of the cul-de-sac (save for Eddy) is turned against Edd, it is up to Jimmy to restore his former reputation.

After yet another failed scam, the Eds start a repair business.

After a scam gone wrong, Eddy declares war on Kevin, much to Edd's disgust.

The Eds try to use reverse psychology to ward off the Kankers.

Rolf grows tired of the modern life in the cul-de-sac and longs for the Old Village. Eddy creates a makeshift village to scam Rolf.

Flashback episode that features alternate stories. The Eds try to make their way back to the place all the flashbacks began. In this journey many things are explained, including: Plank's chip (Plank got stuck in Rolf's teeth), and why Jimmy wears a retainer (the Eds tricked him into eating a bowling pin when he thought it was a cream horn).

Ed, Edd and Eddy spend the day attempting to move up in the world.

To attract customers to their arcade, Edd puts Ed in a monster costume. Now, Ed thinks he really is a monster!

Everyone in the neighborhood competes to be the first to remove a quarter that's stuck to the sidewalk.

The Eds find a key and try to discover what it unlocks.

The Kanker sisters are combing the cul-de-sac for a missing heirloom when Edd and Eddy discover that it's stuck on Ed's finger.

The Eds investigate an abandoned house as a bet Eddy makes with Kevin, trapping themselves in the process.

Eddy and Ed must turn to the Urban Rangers for help after the Kanker Sisters kidnap Ed.

To get away from Sarah, Ed moves into Rolf's barn, testing the latter's hospitality.

After pulling an all-nighter working on a project, Edd tries to sleep, but is constantly interrupted by Eddy and the others.

The Eds are cleaning Rolf's animals for money.

After being threatened by the other kids, Edd turns Ed and Eddy into polite people like him. This backfires when they both go overboard with niceness.

It is "Customer Appreciation Day" at the Candy Store — a chance for the Eds to get free jawbreakers. But they must reach the candy store before it closes.

The Eds act like each other as part of a game of Truth or Dare.

What's with Edd's kitchen?! It's covered in sticky notes! Double-Dee's parents make him do boatloads of chores, and communicate them through sticky notes. Edd doesn't seem to mind, except for one thing — his father wants him to mow the lawn!

After the Eds find Jimmy with Plank due to a feud between him and Jonny, they make new friends for Jonny at a cost.

Eddy loses his voice after a fly gets stuck in his throat. Therefore, Edd gets a bell that he could use when he needs to talk. Nobody knows what Eddy wants until Rolf comes along and invites the Eds to dinner...

Ed, Edd and Eddy reminisce about past exploits when Edd asks them to contribute to his new time capsule.

After a scam goes horribly wrong and ends up sending an armchair into Kevin's house, Eddy makes up a quick lie, telling Kevin the "Mucky Boys" did it. He convinces Kevin into believing it, and soon the whole cul-de-sac is searching for the Mucky Boys.

Pinky and the Brain