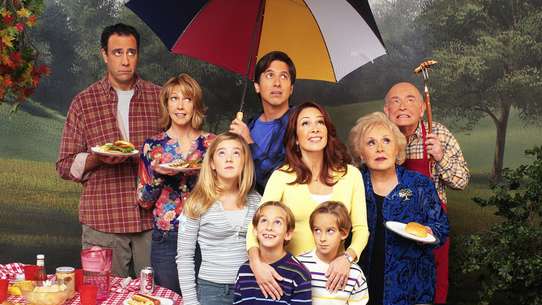 The BEST episodes of Everybody Loves Raymond

Everybody Loves Raymond revolves around Ray Barone, a successful sportswriter living on Long Island with his wife, Debra, 12-year-old daughter, Ally, and 8-year-old twin sons, Geoffrey and Michael. That's the good news. The bad news? Ray's meddling parents, Frank and Marie, live directly across the street and embrace the motto "Su casa es mi casa," infiltrating their son's home to an extent unparalleled in television history. Frank's favorite expression, "Holy Crap," is shouted at regular intervals, and Marie's "cooking advice" is less than appreciated by Debra. Brother Robert, a divorced policeman, is constantly moving in and out of his parents' house, and loves to drop over and resent Ray's successful career and happy family life. Ray and Debra just wish someone would knock once in a while. Finalizing it's 9th and final season, the cast and crew of "ELR" has had a very successful run, and it makes it even harder for them all to say good-bye. This show has a place in televi

Ray fears getting his adenoids removed, but Debra convinces him to go through with the surgery. At the hospital, while Marie is in the bathroom, the nurse says that Ray isn't waking up from the anesthesia and everyone fears he may die. Fortunately, thirty seconds later, the doctor comes out and says he's just fine. Everyone agrees not to tell Ray or Marie about it; however, Frank ends up telling Marie who rushes over to smother Ray with kisses. Ray finds out about it and begins acting weird as if he thinks he really is going to die. After a couple minutes, he gets out of it. The show closes with the entire family sitting around the table eating and arguing, just like the Barones always have in the past nine years.

When Robert and Amy break up Raymond is blamed by everyone because of some bad things he told Robert about marriage.

In this flashback episode, Ray and Debra remember their days in their first apartment. Debra finds out she's having twins, and so they decide they need a house. Ray maps a strategy where they are not close enough for everyday visits from his folks but not far enough for overnight stays. A mustached Robert discovers his wife wants a divorce. Part-time realtor Frank finds Ray and Debra a perfect house across the street from him and Marie. Debra decides living across from her in-laws is a good idea.

Raymond decides to spend a shift accompanying his brother Robert, a policeman. Initially, spending a shift in the back of Robert's patrol car bores Raymond and he wonders why he even bothered putting on the bullet-proof vest. But his boredom quickly turns to terror during a chance visit to Nemo's restaurant that puts them in the middle of the hold-up. When Robert saves the day by throwing a hot pizza in the burglar's face, Raymond sees for the very first time how courageous his brother really is.

Feeling pathetic because he lives with his parents, Robert finally musters up the courage to move out on his own. Encouraged by Ray, and much to his parents' horror, Robert packs up his bags, takes his dog and moves into a garage apartment. But the move affects the family more than they anticipated. They feel the absence of their relationship "buffer." As Debra describes it, "He's like.the lead apron at the dentist." Meanwhile, Robert enjoys his newfound freedom, until Raymond comes to visit and points out that the older couple with whom he is living are really carbon copies of their own parents -- from whom he was trying to get away.

When Marie surprises the family with the news that she's treating them all to a two-week vacation in Rome, everybody loves the idea – except Raymond. It's virtually impossible not to enjoy oneself in a country as beautiful as Italy; but, if anyone can manage it, Raymond can. Not willing to let his sour mood spoil it for the rest of the family, Debra, Frank, Marie, Robert and the kids go on their merry way and soak up the atmosphere, sights, smells and tastes of the city of love and try their best to ignore Ray. Meanwhile, Robert meets the girl of his dreams – she's stunningly beautiful, unbelievably sexy and works in a gelato shop.

When Ray's house is tented for termites, he moves his entire family into his parent's house and gives Frank and Marie a taste of their own medicine. Marie's initial excitement that "Raymond has come home!" quickly fades when the world's greatest home intruders start to feel intruded upon. Sensing her in-laws' growing frustration with the disturbance of their daily routine, Debra decides to have a little fun at their expense and "help them" like they always claim to be "helping her" – until she and Ray realize that once again, they just can't win the game.

When Ray and Debra find Frank painting their house, they find out that Marie put him up to the job due to his retirement. But, when Frank paints it the color they don't like, Ray fires him. That's when Marie reveals the truth behind Frank's retirement.

Debra brings the kids to her parent's house and Ray stays home alone. Ray can't sleep because he's scared so he goes to Robert's but Robert's fine. So Ray goes to his parent's house where he finds Robert scared too. The two reminisce about how Frank used to scare them as children.

After Frank has one accident too many, Debra decides that the kids can't ride with him anymore, which makes Raymond realize that his dad is getting older. Not only did Frank back into Robert's patrol car, but further investigation reveals that his driver's license is expired! Uncomfortable with the fact the he's not a safe driver anymore, Debra decides she doesn't want the kids in his car. But the most uncomfortable part for Ray is thinking about the fact that his parents are really getting older and unsafe driving is only the beginning of the journey.

Frank fakes an injury so he won't have to go on a cruise with Marie. Ray ends up going and gets mistaken for her lover.

When Marie and Frank get some test results back they find out that they're not as healthy as they thought. So Marie throws out all the unhealthy food and makes Frank go on a diet with her. This doesn't sit well with him and the rest of the family when it comes to Thanksgiving dinner. Instead of the traditional turkey dinner she makes a tofu turkey. So Ray orders a traditional Thanksgiving dinner from a restaurant. Debra thinks that Ray might have hurt his mother's feelings but it's quite the opposite when he catches Marie eating his Thanksgiving dinner in the middle of the night.

When Marie surprises the family with the news that she's treating them all to a two-week vacation in Rome. Everybody loves the idea except Raymond. It's virtually impossible not to enjoy oneself in a country as beautiful as Italy, but if anyone can manage it, Raymond can. Not willing to let his sour mood spoil it for the rest of the family, Debra, Frank, Marie, Robert and the kids go on their merry way and soak up the atmosphere, sights, smells and tastes of the city of love and try their best to ignore Ray. Meanwhile, Robert meets the girl of his dreams. She's stunningly beautiful, unbelievably sexy and works in a gelato shop.

When Marie crashes and ruins her Tupperware party, Debra decides that she's had just about enough of her mother-in-law's constant interference. She takes pen to paper and writes a letter to her mother-in-law, telling her to stop intruding into her life. Horrified by the problems that this letter might trigger, Ray does everything in his power to intercept the offending document – but he fails. Surprisingly, the family discovers that honesty really may be the best policy.

Ray, feeling guilty about only getting his dad a card for his 65th birthday, makes up for it by buying him a fancy and expensive aquarium just like the one he always admired in the Chinese restaurant. At first Frank adores the gift, but after one of the fish dies, he starts to hate it. Ray thinks it must be because the fish's demise reminded his dad of his own mortality - until he finds out the real reason and learns an important lesson about father-son relationships.

Ray feels jealous of Robert when he visits his new apartment and sees that it's filled with beautiful women. Also Frank turns Robert's old room into a lounge.

After the agent tells Robert he has a unique look, he convinces him to pose for head shots with their "in-house" photographer. But when Robert and Ray return for the pictures, they are surprised to find the modeling agency has mysteriously disappeared.

When Ally has to do a school project on genealogy and interview her oldest living relative, Ray helps her track down Frank's long-lost Aunt Sarina, who lives in Italy. But apparently the unmarried Sarina has taken "stop by if you're ever in America" a little too literally and shows up at the front door. Her American family instantly adores her for her way with pizza and old world charm. Ray, as always, thinks it's too good to be true and he's right.

Amy's parents put Robert on the defensive when they point out his strange habit of touching food to his chin before he eats it. When Amy confides in Debra, who tells her that Robert's strange behavior could be psychological, she devises a plan to break him of his chin habit for good.

Tempers flare when Marie accuses Debra of not returning a borrowed canister that holds sentimental value and Debra insists that she has already given it back. Debra is then horrified when she discovers that she does indeed still have the canister in her possession. With Ray and Robert's reluctant assistance, she concocts an elaborate scheme to get rid of the evidence, rather than confess to Marie that she was wrong and her mother-in-law was right all along.

After Marie has Frank return an anniversary gift Ray and Debra gave them Ray and Debra reminisce about the first time they slept together. Debra then decides to go apologize to Marie but Marie refuses to accept her apology when she learns that Debra lied to her in front of a priest.

When six-foot-tall Raymond discovers that he's shrunk a quarter of an inch, the resultant midlife crisis grows until it stretches into "an end-of-life crisis." So before he gets put six feet under, he decides to make a list of his dreams and goals in life. But when Debra finds him writing his "Things To Do Before I Die" list, she decides to show her husband the proper way to have his crisis. Meanwhile, Marie gets mad at Frank when she discovers that he sold half of their burial plot for a profit.

While the Barones prepare for a friend's wedding, Ray kiddingly asks Debra, "Why did you marry me?" When she hesitates, he flashes back to the not-so-magical night 10 years before when he popped the big question. Ray gets unexpected, unsolicited and unwelcome help with from his parents, but Debra says yes anyway. That leaves the gloomy groom wondering if she did so because she loves him or because she felt pressured. So Ray decides he's "gotta give her another chance to say no."