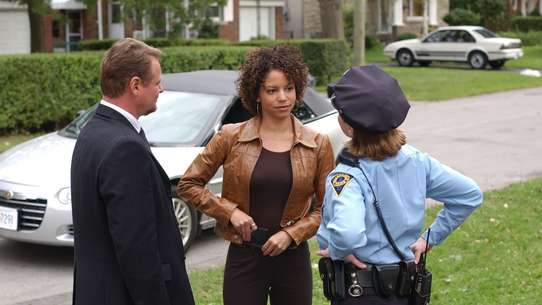 When Rebecca Crowley insists that she spotted her brother Richard, who has been MIA for years, Brooke and Jess are called in to investigate the claim. Despite the Army's official story that Richard died during a special ops mission in Bolivia, Brooke and Jess learn that he became involved in the drug trade, causing them to wonder whether Richard's disappearance was intentional. The more they discover, the more Brooke and Jess realize that he may not be the person they should be looking for.

Brooke is attending a wedding with Eric Reynard and the bride doesn't show up for the vows. When the groom goes to talk to her there is a crash and Brooke finds him unconscious. The team starts searching. Later a ransom note (or e-mail) arrives.

The team is called upon to locate the missing husband of a woman in the Witness Protection Program, without leading the bad guys to her location.

Brooke takes on the authorities after a death-row inmate makes a final plea. As time runs out, Brooke and Jess risk it all to try to save the innocent man.

Brooke and Jess must discover how a woman disappeared from an airplane in mid-flight. Meanwhile, Brooke finally learns the identity of the secret admirer who has been sending her gifts.

Jess and Nicole are called in to help when a hurricane breaches destruction on a small North Carolinian town and dozens of people go missing. Jess' visions lead them to a young boy but shockingly, he's kidnapped from the hospital. The team works hard to find him, concentrating especially on his single father, whose wife (the mother of the missing boy) left him and their son two years earlier. Jess is attracted to a man who she caught attempting to break into the father's car. Pollack scolds Janey for a judgement call she was forced to make.

In the team's most perplexing case so far, a teenage girl's parents suddenly vanish from their car while the vacationing family is stopped at a gas station on the highway.

Under heightened stress as the frequency of her waking visions increases, Jess meets an FBI inspector who tells her about a secret investigation of Brooke. Jess can't discern whether this is a dream or reality and begins to believe she is going crazy. What's really happening: Jess' visions are helping the bureau track down a female serial killer, and the killer's dark paranoia is entering Jess' mind.

Nicole and Jess are on the search for a woman named Caroline Dunn who went missing during spring break. The team believes she went missing with her boyfriend Luke. meanwhile Nicole is still ready to go back into the field while dealing with a concussion. As the search for Carolyn continues the team discovers a surprising result that they didn't expect.

Nicole and Jess travel to Budapest Hungry to track down a missing bridegroom.

This case may be the toughest one the team has had yet. When the inventor of Easy Abs is nowhere to be found the team finds a ransom note and then another ransom note. What has the team confused is the two different amounts on both ran some notes.

Nicole gets to know her mom and tries to get to know her better. They also try to find a missing Department of Justice agent and try to find out why and who blew the cover of the DOJ agent.

Hotshot FBI agent Brooke Haslett's search for a missing woman brings her to Indianapolis, where she follows a hunch about a U.S. senator's involvement in the disappearance of a young woman. The investigation takes an unexpected turn when Jess Mastriani, a young local woman, begins having dreams about a missing girl after getting struck by lightning. She is shocked to learn that the dreams are giving her metaphorical clues to the girl's location but an impulsive decision ruins the situation for all involved. When the FBI finds out about her dreams they ask her to work for them as a special consultant & Brooke is made her partner. She also dreams about the missing woman Brooke is searching for. But Brooke finds it difficult to take these clairvoyant dreams seriously as each one points toward events in the past.

Jared Hart and some assassins attempt to eliminate another member of the witness protection system. Nicole and Jess follow in their footsteps while Antonio and John try to figure out how Hart is locating the innocent victims. Meanwhile, the search continues for Jared's wife and one or more members of the team may not survive the shocking case in the breathtaking conclusion of "Truth or Dare".

Antonio, Jess and Colin give up their vacation time to help Nicole investigate the disappearance of her nephew.

#16 - And the Walls Come Tumbling Down

Jess has a vision that leads her and Nicole to discover a 10-year-old skeleton. When the body is identified, Pollack orders them off the case. Jess and Nicole continue to work on the case while trying to keep their work away from Pollack and trying to figure out why he's so insistent that they can't work on it. Meanwhile, Pollack's wife kicks him out.

Jess, Nicole, and Antonio search for a missing woman who was delivering subpoenas. They soon discover that one of her deliverees has also disappeared. The case exposes a world of loneliness, corruption, and identity theft. Also, Jess worries that her job is dwindling her social life.

An empty police car is found with blood on the dashboard and two police officers have gone missing. Jess and Nicole quickly discover a police department full of corruption. After Jess witnesses a shocking murder, she must find out which of the many suspect or suspects is a cop killer. The police chief suspects an old enemy of his who shows up in Jess' dream about the police officers having a party. Also, Nicole must negotiate with a crazed man holding three people hostage.

The new team's first official case is a missing FBI cadet whose disappearance puts them on the trail of a serial killer.

Brooke and Jess investigate the disappearance of a wealthy couple who were on a nature trip. Things get complicated when Jess and Brooke find themselves on their own in the woods with a killer on the loose.

A convict about to go to trial for murder kills two police officers and escapes. He then steals a woman's car and kidnaps her. Jess, Nicole, Antonio, and Janey are assigned to the case and Jess and Nicole barely make it out alive of a burning building they enter to rescue the kidnapping victim. However, once the woman is found, the mystery has just begun. Nicole urges Jess to get to know Janey better and the three women urge Antonio to keep his job. In a jaw-dropping ending, somebody doesn't make it out alive of a drugstore shootout.

Antonio's ex-wife's sister is kidnapped. The team wonders if she was taken by a bitter victim of his ex-wife, who is a successful District Attorney or if it was done randomnly. A later attack blows the case wide open. Jess dreams about a little girl and toys. Meanwhile, Antonio and his ex-wife must deal with the emotions that are opened up between them.

When the teenage perpetrator of a high school hostage crisis disappears, the agents solicit some unusual help from their suspended boss, Pollock, to investigate the school psychiatrist's records. Then, when another student goes missing, suspicion falls on the mysterious Patient X.

In what may be the most bizarre case yet for the FBI squad, the team must find missing twin girls in order to figure out who killed their parents and why! Jess' visions suggest that the girls are separated but both lost in the wilderness.