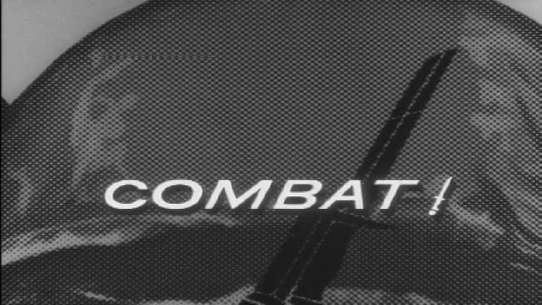 The BEST episodes of Combat!

Every episode of Combat! ever, ranked from best to worst by thousands of votes from fans of the show. The best episodes of Combat!!

This WWII show centered on the lives of the men from King Company. For 5 1/2 years the men of King Co. faced the enemy starting with the landing on Omaha Beach-D Day June 6, 1944. You see how they evolved from a squad of men to a family.

This two part Combat! episode is the story of the futility of war as viewed through the eyes of surviving infantrymen. An American division of troops is making an assault all along their lines. Lt. Hanley's platoon is ordered to take a strategic hill that overlooks a needed road, but it is protected by two concrete bunkers with machine guns. Saunders gets hit in the first assault while several other GIs are killed. Hanley finds it almost hopeless with Saunders wounded.

Despite having just having liberated a French town, Saunders is demoralized and angry. In this emotional episode, he lashes out at a 13-year-old girl whose one ambition is to serve the troops as a nurse. After he gets some sleep, she wins over his heart and gains his support, but she still manages to crosses his line.

Establishing an observation post in a deserted church, Saunders meets the daughter of a German soldier.

In part 2, things look bleak for the men of King Company, but Lt. Hanley's platoon gets the support of a tank to help take the hill. The tank is destroyed by a German bazooka. Now Hanley plans to use the tank as cover to attack the last German bunker.

A new replacement, Hank Dolan (Tom Simcox), believes he is bad luck. When things start happening to the others in the squad, they start believing him.

#6 - The General and the Sergeant

John Dehner and Vic Morrow have the title roles, but they play two characters from two wars nearly thirty years apart. Upon liberation of a French village by King Company, French General Armand Bouchard, a veteran of WWI, wants to take command of Saunders' squad. While Bouchard apparently suffers from some form of dementia and is the object of ridicule by some of the villagers, he obviously has personal pride and character.

This episode is strictly for laughs. The squad is left in a French village to wait for a ride to meet up with Saunders and Kirby is placed in charge. Three good looking gals smile at our guys as they pass by. Kirby, Caje, and Billy immediately want to delay their ride so they can woo the gals. Three Explosive Ordinance Disposal sergeants already have dates with the gals, and our guys connive to beat the sergeants out of their dates.

Lt. Hanley and the squad are en route to meet a commander of the Free French Army, but require a guide. Massine (Peter Whitney) is a strong-willed, determined man who has a small band of underground fighters. Before Massine will lead Lt. Hanley to Capt. Boulange, he has an agenda of his own to accomplish, and bends Hanley to his will.

Rob Lawson (Dean Stockwell) joins the squad with the belief that his fate his sealed, and with a reputation as a one-man army. Hanley, Saunders and their men are worried that his reckless bravery will get them all killed.

Lt. Hanley and his men are rescued by Greek Colonel Kapsalis and his squadron of fast moving jeeps with mounted machine guns. Kapsalis is a gung-ho, no-holds-barred soldier fighting a personal vendetta against the Germans. He orders Lt. Hanley and his men to join him in an attack. Between actions, he shares his gonzo life philosophy with Hanley.

Marsini, the sole survivor of a squad, blames Saunders for the fate of his fellows after Saunders could not help because he had orders to keep his position. Marsini volunteers to lead the sergeant on reconnaisance of the same deadly area.

This episode is all Lt. Hanley in a tightly constructed plot. Concussed during an artillery barrage and separated from his platoon, Hanley starts to come out of his daze to find he is being taken prisoner by an SS soldier. The surprising plot twists start immediately and keep on coming, so one needs to pay attention.

When the Americans liberate a town, the French shoot a man for collaborating. His daughter, Marie Marchand (Marisa Pavan), is angry at everyone and leaves town. The Americans soon learn her father was actually an undercover allied agent, and Saunders' squad is sent to find her. Saunders needs her help more than he thought, and must overcome her bitterness.

Caje must deal with killing a Frenchman. He does this by turning his attention to the dead man's daughter, shirking his duty and worrying the squad. Sgt. Saunders must find a way to bring Caje back to reality before losing him. Saunders finds what he needs when the town is attacked by the Germans.

Lt. Hanley orders Sgt. Saunders up a hill to locate German artillery that has eluded all attempts to find and destroy it. But the hill is crowned by a dense ring of machine gun nests, and casualties have mounted. They separate and Saunders is wounded in the leg. He crawls until he falls into an abandoned mine, where he has an unusual encounter with Hans Oberst (Alf Kjellin).

Lt. Hanley is pulled off the line and sent to London, where he is assigned to a secret mission to aid a French physicist to escape occupied France before the Gestapo captures him. Hanley once spent the summer in France at the family's home and is the only man the scientist will trust - especially since it has been discovered that someone in the French resistance is a double agent.

#17 - No Hallelujahs for Glory

Saunders resents a cold-hearted, reckless photojournalist (Elizabeth Allen) who accidentally causes a town to believe they are liberated. When the Nazis move in and the resistance workers are exposed, she learns the seriousness of human suffering during war.

A wounded Lt. Hanley is pursued by a squad of Germans, and takes refuge in a French farmhouse at great peril to the mother and daughter living there.

Hanley sends Saunders' patrol to scout for artillery shelling the factory they've been ordered to hold. Ambushed by a German squad, Saunders is knocked out and Caje is badly wounded and captured. Saunders finds refuge in the home of blind Babette (Claudine Longet) and her boyfriend Michel (Robert Duvall), who is not who he claims.

Saunders' squad encounters orphan boy Bijou (Michel Petit) gobbling rotted food in a bombed-out village. The squad gives him K-rations and chocolate, but Kirby distrusts him and suspects he is feeding information to the Germans. The squad races to bomb an oil depot. When Caje is captured, they begin to think Kirby may be right.

Interred in a German P.O.W. camp, Sgt. Saunders and his squad must find a way to escape before they all die in the hands of SS Capt. Steiner. Billy, who escaped, reaches Lt. Hanley, but no help is coming. Saunders plots a scheme to escape. He convinces Sgt. Akers and his men to work with them.

When their jeep hits a land mine, Saunders, a tank captain, and private Gavin attempt to maneuver an abandoned German tank through enemy territory.

After losing his entire squad to Saunders' men, a wounded German sergeant escapes and vows to kill the Americans, saving Saunders for last.

Saunders' squad suffers from exhaustion and lack of sleep. After two days of continuous patrol in bad weather, their low morale and raw nerves jeopardize a vital mission. Surprisingly, the worst case of this ISN'T Kirby . . .

After an exhausting 24 hour pass that left him broke, hungover, and happy, Kirby gets a new guy to back him in a poker game.