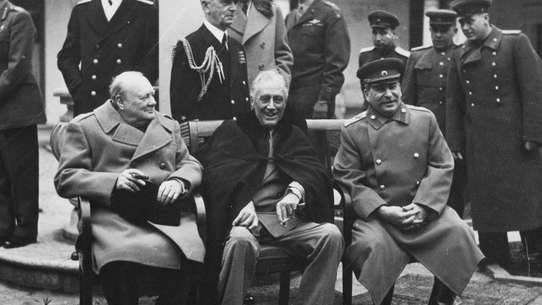 The BEST episodes of The World at War

A groundbreaking narrated by the actor Laurence Olivier about the deadliest conflict in history, World War II.

Western scientists have developed a new, immensely powerful weapon - the atomic bomb. On August 6th 1945, the Enola Gay delivers the world's first atomic bomb to Hiroshima. The world would be forever altered.

France discovers it is woefully unprepared for modern warfare as the Nazi war machine easily skirts around the Maginot Line. Britain retreats and prepares for invasion.

Germany, a nation stricken by humiliating defeat and emerging from crippling economic depression, looks to one man for a resurgence of hope and dignity. That man is Adolf Hitler…

Churchill called Italy the 'soft underbelly of the crocodile' and thought the Allies could cut through it to the heart of Germany. But the soft underbelly turned out to be a 'tough old gut'.

The Nazi's are racist; the Aryans are a master race, others, particularly the Jews are sub-human. Himmler's SS sets about ridding Europe of millions of Jews.

Bomber Command begin bombing German cities by night and the Americans reinforce the attacks by day; a whirlwind of terror and destruction that will win the war.

The Americans fight their way across the Pacific towards Japan and the Philippines. Perhaps the bloodiest campaign of all, each island has to be taken by storm and the Japanese fight to the last man.

After Dunkirk, Britain faces the German onslaught. Although the RAF wins the Battle of Britain, the cities are blitzed and on the continent the last Allies are conquered. The outlook is grim.

The Western Allies resolve to invade Europe. England becomes a floating supply dump and the British and Americans assemble the largest invasion fleet in history. It is June 6th 1944 - D Day.

The rise of the Japanese Empire, the Sino-Japanese War, the Soviet-Japanese border conflicts, Pearl Harbor and the early Japanese successes in the fall of Malaya and Singapore. At war since 1931 on the Chinese mainland, the Japanese hope for easy victories over the British and Dutch. And then on December 7th 1941, Japan makes their infamous attack on Pearl Harbour.

In Eastern Europe, the full force of the Nazi machine rolls on - but in Britain, an uneasy calm settles on the nation. It is the 'phoney' war, with the sound of distant guns thundering ominously on the horizon…

For two years the Soviet Army fights the Germans almost alone. After one of the greatest land battles in history, the nation survives and triumphs - but with a loss of no less than twenty million of its people.

Hitler retreats to the Fuhrer bunker in Berlin as Germany crumbles around him and his lieutenants abandon him to a fate of suicide. Meanwhile, the Russians raise the red flag in Berlin.

Initially apprehensive about the outcome of declaring war, the Japanese quickly turn to celebration with early victory. In the end, their worst fears are unimaginably exceeded.

For many the Second World War was the most significant experience of their lives. Heartbreaking first hand remembrances from a vast array of survivors on both sides of the war.

After dominating southeastern Europe through force or intrigue, Germany begins Operation Barbarossa, the massive invasion of Soviet Union. Despite several quick victories, the invasion ultimately stalls after a failed assault on Moscow during Russia's harsh winter

The war ends slowly and messily. Britain is victorious but exhausted and the super-powers confront each other as they decide the fate of Europe.

The opposition by various factions to the United States of America entry into the war, U-boat attacks on Atlantic convoys and America's gradated responses, the mobilization of America after Pearl Harbor, the loss of the Philippines, the Doolittle Raid, Midway and Guadalcanal.

Initial victory in Europe turns sour after the defeat at Stalingrad, yet Germany prepares to fight to the end - even after an assassination attempt on the Führer.

In a war of high technology and animal courage, the German U-Boats fight Allied merchantmen, hounding them in packs.

Hitler's early successes in Russia made him reckless and he resolves to capture Stalingrad. The battle lasts six months with the Russians emerging as victors. The Wehrmacht never recovers.

For 2 years the 8th Army and Rommel's Afrika Corps fight in the wastes of North Africa. Finally the tide turns at El Alamein.

Through a neutral country, Holland is attacked by Germany without warning in 1940. During the next four years, life carries on seemingly without incident, but underneath resistance never dies.

Vera Lynn sang of a lovely day tomorrow, but the war in Burma was mud and monsoon. Britain's largest army learned to master the jungle and fought the Japanese to standstill.

Finding strength in unity at home in Britain during the war, it was a time of gas masks, Winston Churchill, Dig for Victory, evacuation, George Formby, the Land Army, ITMA, the Squander Bug and the Beveridge Report.