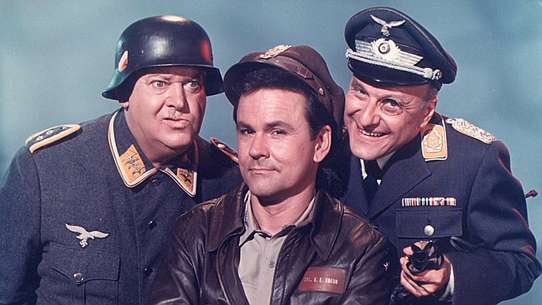 The BEST episodes of Hogan's Heroes

The exploits of five World War II prisoners in a German POW camp, 'Stalag 13' who, while "under the cover" of being typical prisoners of war, are really secretly doing their utmost to sabotage the German war effort through whatever means necessary. Col. Klink is very proud that no prisoner has ever escaped under his watch, not that they would want to. Suave, cool and smart, Col. Hogan takes advantage of Col. Klink and Sgt. Schultz's bravado and general cluelessness to carry out his missions.

When an Italian POW camp commander arrives at Stalag 13 to train under Colonel Klink, Hogan and his gang try to convince the new arrival to go to work for the Allies by plying him with pizza.

When two ruthless German officers put the squeeze on Colonel Klink to contribute money to their phony cause "or else," Hogan and the gang must scramble to come up with the cash and deliver it in time to keep Klink out of harm's way as the camp's inept commandant.

Colonel Klink is desperate after General Burkhalter plays matchmaker and pairs Klink with the general's monstrous sister, Gertude. Can Hogan deflect some of the Cupid's flying arrows away for the hapless, helpless Klink?

An assertive General Burkhalter "requisitions" the famous Édouard Manet painting, "The Fife Player," from the Louvre museum in Paris to give to Hermann Goering as a birthday present. Undaunted by the seeming impossible logistics, Hogan and LeBeau decide to steal it back!

To smuggle out an anti-radar device, Hogan passes LeBeau off as a fortune-teller after convincing Klink he's been struck by lightning.

At Stalag 13, a German prisoner-of-war camp, Colonel Robert Hogan and his fellow cohorts are a subversive group with many hidden talents. However, a spy has been planted amongst the men by the Germans. And when he learns of the gang's subversive operations, "Hogan's Heroes" must act fast to discredit him.

Hogan is unexpectedly drawn into an assassination plot against Adolf Hitler when he is ordered to deliver a briefcase rigged with explosives to a German general involved in the plot.

#8 - German Bridge Is Falling Down

Several attempts by Hogan and his men to destroy a German bridge end in failure --- until they decide to use the Nazis' own ammo to accomplish the task!

Hogan convinces Klink to open a business selling "rare" cuckoo clocks, which Hogan plans to use for smuggling information.

#10 - How to Escape from Prison Camp Without Really Trying

Hogan is asked to immobilize the entire German 6th SS division --- 10,000 men --- for two days while the Allies organize a surprise attack. The task seems impossible, especially in the presence of the two stern Gestapo colonels who are filling in for a vacationing Colonel Klink.

Two German officers have new and differing plans for Stalag 13 --- both of which threaten Hogan's operations. In order to protect the camp and the gang's secret subterfuge, Hogan plays the two men against each other.

Somewhere along the elaborate, intricate underground escape rout there is a disastrous weak link, Determined to find it, Hogan, Newkirk and Lebeau decide to break out of Stalag 13 by following the escape route themselves.

Klink becomes convinced that he is marked for assassination by a mysterious "Mr. X" after a series of close calls at the stalag. Could Hogan be behind the threats? Yes... but it's all part of a plan to masquerade as Klink in order to help a valuable underground agent escape from the camp!

Jilted by his girlfriend back home, Carter requests permission to escape so that he can somehow woo her back. Hogan agrees—but only if Carter can accomplish one last task of passing bogus battle plans on to the Germans.

#15 - Happiness Is a Warm Sergeant

Sergeant Schultz, while escorting Newkirk to the dentist, gets drunk and is replaced by a hard-lined, no-nonsense guard. Hogan and his crew must act fast to get the docile Schultz restored to his post.

Masquerading as German workers, Hogan and the crew have made elaborate and foolproof plans to blow a German cannon factory sky-high --- but their plan backfires when Newkirk winds up being drafted into the German army!

Hogan and his men make plans to lure Luftwaffe bombers within range of an allied anti-aircraft installation hidden in an abandoned warehouse, but Carter make a shamble of the plan when, while "leaking" the info to Klink, he forgets the name of the town where the strategic warehouse is located.

The bumbling Sergent Schultz has unwittingly been conned into making a trip to Heidelberg as courier for the underground, but after upsetting Colonel Klink, the sergeant is ordered to remain grounded at the camp. How will Hogan and the gang win him a new weekend pass?

A secret military document is mistakenly hidden in Colonel Klink's topcoat at a party, and a desperate Hogan must nab the document because of both its value to the allies and because Klink will be charged with treason and replaced at Stalag 13 if it is discovered in his possession.

To get the inside secrets of a Nazi chemical warfare facility, Hogan and his cohorts must convince the Germans that Carter has turned traitor and wishes to defect to the Third Reich.

Hogan's scheme to kidnap General Burkhalter and trade him for an underground agent goes awry when Colonel Klink --- not the general --- is the one who gets kidnapped.

When Colonel Klink boasts that the Nazis' new Tiger Tank will lead the Germans the victory, Colonel Hogan devises a plan to get his hands on one of the vehicles, have it disassembled, send its blueprints to the Allies, and reassemble it --- right under Klink's nose.

Hogan and the gang decide that the hapless Colonel Klink would be the ideal patsy to use to get an important list of agents safely to England --- with a little boost from Carter's masquerade as a ferocious German general with a fondness for duels.

Colonel Klink's sudden bout with the flu jeopardizes Hogan's plan to smuggle an underground agent out of the camp in the trunk of the ailing commandant's automobile.

When LeBeau, Newkirk and Carter are captured by the Gestapo during a sabotage mission, Hogan must convince the affable sergeant Schultz to impersonate the stern Colonel Klink and demand their release.