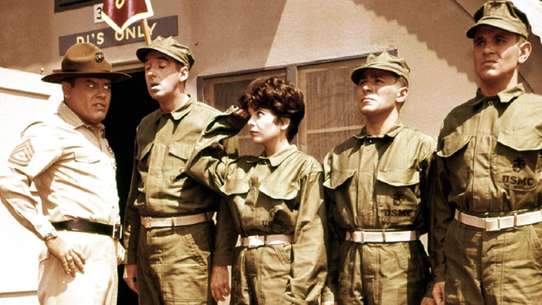 Gomer Pyle was a sweet but not too smart Marine from Mayberry, North Carolina who was stationed at Camp Henderson near Los Angeles, California. Gomer's innocence, naivete and low-key demeanor often got him into trouble, most frequently at the hands of his loud-mouthed superior, Sgt. Carter. Duke, Frankie, Lester and Larry were some of Gomer's pals and fellow enlisted men at Camp Henderson.

Hacker plans to get even when Carter sells his car to Gomer instead of to him.

#2 - Gomer and the Queen of Burlesque

Sgt. Carter gets Gomer a date with an exotic dancer.

Carter plans to use Gomer to win the inter-squad competition.

Gomer's love for Welsh rarebit causes him to sleepwalk -- and to tell off Carter.

Gomer befriends a couple who claim Camp Henderson is on their land.

Sgt. Hacker bets Carter that he can't go 24 hours without losing his temper, and then enlists Gomer's aid to win his bet.

Gomer wins a boat in a jingle contest, but it's Carter navigating iinto taxes, license fees, and other expenses.

#8 - A Date for the Colonel's Daughter

Gomer escorts the Colonel's daughter to the enlisted men's dance.

Gomer takes care of Carter's car -- which gets stolen and wrecked.

Two shyster lawyers try to get Gomer and Carter to file a false damage suit after a near miss from an automobile.

Gomer has stage fright and loses his voice just before a Washington show.

Gomer represents his platoon in a talent contest.

The Marine's favorite nightclub singer returns: Lou-Ann Poovie, who looks like a dream and sings like a nightmare. Sgt. Carter fights for her favors with two rivals -- Gomer and Duke.

When Lou-Ann is about to be fired from her job as a nightclub singer, Gomer finds her a job as a salesgirl.

The platoon's chances to sing in a movie are almost spoiled by Sgt. Carter -- he can't carry a tune.

Gomer's chosen as companion of a new sentry dog -- and turns the guard dog into a pet.

Gomer saves an old horse from the glue factory and tries to hide her at the base.

A club owner wants Gomer to sing every night.

Carter becomes the star of a documentary about the Marine Corps.

Carter tries to transfer Gomer to the Marine band.