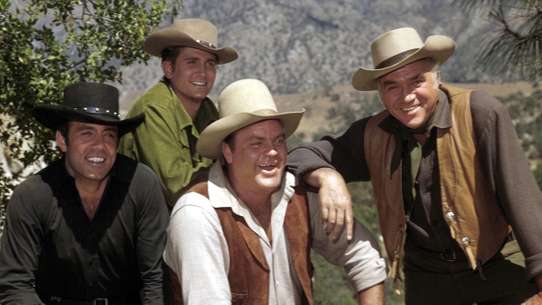 The WORST episodes of Bonanza

Every episode of Bonanza ever, ranked from worst to best by thousands of votes from fans of the show. The worst episodes of Bonanza!

The show chronicles the weekly adventures of the Cartwright family, headed by the thrice-widowed patriarch Ben Cartwright. He had three sons, each by a different wife: the eldest was the urbane architect Adam who built the ranch house; the second was the warm and lovable giant Eric "Hoss"; and the youngest was the hotheaded and impetuous Joseph or "Little Joe". Via exposition and flashback episodes and each wife was accorded a different ethnicity. The family's cook was the Chinese immigrant Hop Sing.

Dr. Will Agar is Virginia City's new town doctor, and brings with him new skills and expertise to treat area residents' health maladies. Only thing is, Dr. Agar is seriously addicted to morphine, and it results in serious trouble for everyone.

Ruthless land baron Bradley Meredith (Lorne Greene in a dual role) makes his return to Virginia City with a new scheme to get control of the Ponderosa. He learns the Cartwrights are on a cattle trip to Carson City and takes advantage of their absence when "Ben" claims is seriously ill and begins his holdings to friends.

The Ponderosa hands are upset when new hand George Whitman is hired on, it is rumored he is a jinx. Hoss tells George to ignore such foolishness, but a gypsy fortune teller says otherwise.

A dying woman and her son are rejected by her father because she had a child out of wedlock.

To help the hapless wife and daughter of a lazy dreamer, Hoss arranges a "fixed" horse race.

Ladies' man Lothario Larkin creates havoc whenever he hits Virginia City, so Roy Coffee orders him out of town. Naturally, Hoss takes him in.

One of the wealthiest men in the world, Charles Augustus Hackett, offers to buy the Ponderosa, price no object. Ben says the ranch is not for sale and Hackett refuses to give up.

On their way to prevent a young woman from encountering the renegade Indians, Joe and Tuck are captured, and in order to save them all, Joe must fight Sharp Tongue, who is the leader of the band who went to school with Joe as a youth.

Little Joe convinces Ben to hire Harry Starr, a half-Indian who is accused by other ranchers of being a chronic horse thief. Joe sets out to prove the others wrong, but is the youngest Cartwright's trust misplaced?

A conman heads into town and takes advantage of the Cartwrights with a fake land deal. The conman ends up staying in Virginia city to run an orphanage.

A 7-year-old boy is killed after he walks into a bank during a robbery by the ruthless Springer gang. Joe and Jamie help the boy's angrily grieving grandfather track down Springer.

Lafe Jessup doesn't really want to be married, and now he's about to be a father! The horse wrangler finds a fight with Hoss at his reluctance to perform his duties.

After his only friend is killed, the Cartwrights take in a slow-witted man, who Roy Coffee informs them, is wanted for murder by Arizona authorities.

Ben's ability to close a lucrative livestock contract with a conspicuous widow hinges on the sale of a dilapidated saloon in Upright that Hoss and Joe had impulsively purchased. However, the boys put off the sale when the town drunk (who acts as "saloon keeper") insist the crumbling Trails End Saloon may house a fortune. Things get even more complicated when a woman, claiming to be the daughter of the deceased former owner, envisions turning the Trails End into a booming saloon, hotel and restaurant.

Ben invites opera singer Angela Bergstrom to perform at Virginia City's anniversary celebration. She accepts, but does not tell him that her famous singing voice is long gone

Hoss finds himself in another mess, this one involving a beautiful blonde, a moonshiner, and a nearsighted outlaw who is allergic to chocolate and flowers.

An elderly business associate of Ben's is killed after a man, posing as Candy, tries to rob her; the woman suffers a fatal heart attack, which – since it happens during the commission of a felony – is considered to be the same as if the assailant had pulled the trigger. The real Candy, who had been assaulted at a hotel by the same man, is held in connection with the old woman's death. A woman named Kate is the only one who can back up Candy's alibi, but she has left town with her husband, who is the thief. Griff agrees to go after Kate and have her provide a statement. Only thing is, he discovers – as Ben and Joe do later – that she, too, has a past that, if revealed at trial, could do serious harm to Candy's defense. Meanwhile, Ben is unsure about the young defense attorney's ability to defend Candy, particularly since the state's attorney has a nearly spotless conviction record. But the budding lawyer is determined to play David to the prosecutor's Goliath.

Hoss becomes a judge in a contest--he has to pick the perfect/prettiest baby. The parents of the babies nearly all try to influence Hoss, so he has a hard time deciding. There is one quite hilarious part (though odd).

Hoss relies on clever attorney Whitney Parker, who has a drinking problem, to clear him of a murder charge.

Hoss hires Waldo as a ranch hand after keeping Waldo from killing himself. Hoss soon learns that Waldo is lousy at his job and only causes problems for everyone else due to his clumsiness. Although Hoss is willing to defend him, he soon finds out a secret about Waldo.

Ben and Hoss unwittingly aid a vengeful army colonel who plans to wipe out every Indian he can with a Gatling gun.

Cousin Muley Jones returns to the Ponderosa, along with a pack of noisy hound dogs, in this funny sequel to "The Saga Of Muley Jones".

Jamie becomes friends with the wife of an unpopular schoolmaster, who often browbeats her.

Hoss unknowingly enters a flapjack contest and Joe puts Hoss on a diet which Hoss doesn't care for. Joe's betting on the flapjack contest could get him into some trouble and will he ever succeed in getting the window pane his Pa wants?

The Adventures of Brisco County, Jr.