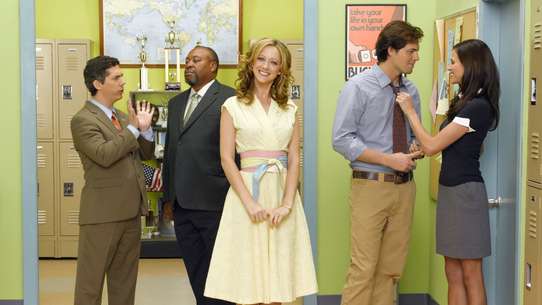 The BEST episodes of Miss Guided

Every episode of Miss Guided ever, ranked from best to worst by thousands of votes from fans of the show. The best episodes of Miss Guided!

This comedy series follows Becky Freeley, a woman working as a guidance counselor at the Glen Ellen High School which she once attended. She tries to help guide the students so that they will cope with high school better than she did. She also interacts with other teachers and Principal Huffy. Ashton Kutcher, famous for his roles in That 70's Show and as the host of the MTV show Punk'd, will be involved as an executive producer. Other executives will be Mark Hudis, Karey Burke, Jason Goldberg, Gabrielle Allan and Todd Holland. The first episode will be directed by Todd Holland.

When Becky finds herself at the bottom of the list of most attractive teachers at a student's gossip blog, she fakes disinterest but secretly tries to move up the rankings.

Becky's anger leads to the death of a teacher while planning an anniversary party.

Now that Becky has finally put all her high school insecurities behind, she returns to her alma mater as a guidance counselor. However, she soon finds that her high school nemesis, Lisa, is a teacher in the school as well. Soon, Becky finds herself competing with Lisa for the eye of Tim the attractive Spanish teacher, among other things.

Becky wants to be a rebel to be able to be among the cool ones, Lisa and Tim.

A shortsighted Bruce assigns Becky, who is the least creative faculty member on campus, to direct the school's high school musical.

Unaware that they are interested in the same man, Becky gives Lisa dating advice and Lisa uses it snag a date with Tim. In the meantime, Vice Principal Bruce fills in as principal when Huffy gets sick and the power goes to his head. He gives a six month detention to a rebellious student, Shawna.