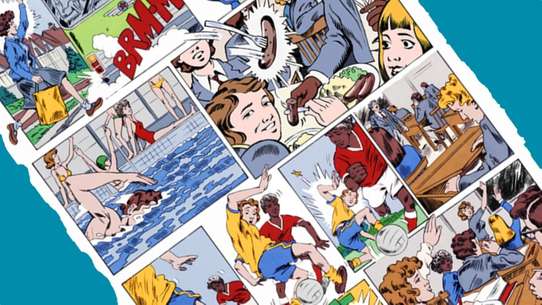 The BEST episodes of Grange Hill

Every episode of Grange Hill ever, ranked from best to worst by thousands of votes from fans of the show. The best episodes of Grange Hill!

Grange Hill is a British children's soap opera television series originally made by the BBC and portraying life in a typical secondary school. The show began its run on 8 February 1978 on BBC1, and was one of the longest-running programmes on British television when it ended its run on 15 September 2008.

Ms. Janowitz suggests the idea of a school newspaper, and Nat continues exhibit a changeable personae until it becomes evident that she is just one of a pair of twins.

On the day of the Dartmoor trip, Ray arrives with his brother's bike, and his wallet. Justine realizes that Chrissy is pregnant after all, and lied about her test.

Cracker and Gemma's mice escape, convincing Mrs. Holmes there is a rodent infestation. Wayne persuades Matt to tell the truth to Mr. Robson, and Sean is brought to justice.

It's time for the School Review, but will the satirical tone be too strong for Mrs. McClusky?

Gripper Stebson makes his first appearance and gives Grange Hill a bad reputation at the sweet shop. Mr Hicks seems to be a bit of a head-case at the swimming lesson: he pushes Christopher Stewart (Stewpot) who cuts his head. He talks his way out of it, when Stewpot's parents come to complain, because the boys are scared of him. Mr. Baxter announces that Mr Hicks will be taking P.E. Mr. Hicks now has it in for Stewpot. Miss Lexington senses something is wrong and speaks to Bullet Baxter, who reprimands her for listening to tittle-tattle, however, older kids are putting doubts in his mind, so he surreptitiously goes to watch Mr. Hicks in action. When he sees Hicks pushing Christopher to the ground, he calls him out and punches him on the jaw.

On an orienteering course, Mandy and Sarah move a control marker for a laugh, and Mr Baxter and Roland get hopelessly lost.

Plans are laid for the forthcoming Prom, and money is raised for Mr. Bronson's leaving present.

Robyn is missing, and the police search everywhere, including the travellers' camp. Justine gets a lesson in etiquette from Mr. Brisley.

Mauler is out for revenge on Gonch. A reporter for the local radio station comes to school. Tegs goes back to his old house.

Who will be Mauler's date? Matthew and Clarke find the owner of the ferocious dog.

Mr. Griffiths, Mauler and Ziggy make a search for the mystery intruder under the cover of darkness.

Gonch sees Mandy in a new light on the Isle of Wight trip. Georgina's been getting weird notes from an admirer, and Trevor keeps losing his beer.

Gonch convinces Trevor that the school is haunted. A teacher-student meeting ends abruptly when all of the students' ideas are summarily rejected.

Fay arranges a date with Mr. King. Ziggy plays a trick on Imelda at the swimming baths, but it doesn't have the result he expected.

A busy day at the zoo. Who is better behaved, Grange Hill or the animals?

Tucker devises a plan to prove that Alan is seeing Susi.

Trisha gets involved with the school council when a rumour starts that school uniform might be brought back.

The proposal of new costly sports gear causes an uproar.

While talking about the bad behaviour of Doyle, Trisha learns that the school has a file on her. Tucker seems confident about his art winning the Magazine Cover Competition, but Doyle seems determined to scupper him. Trisha and Susi have another meeting about their rights and problems- a poll is being held asking everyone about their opinions. Trisha goes to see Mrs. McClusky about being treated like kids, and asks to see her file. Alan finds Susi is at his house, and she ropes him into working out a plan of action.

Pogo has an argument with Karen, in Woodwork, and he breaks her toast rack. Karen hires some help, who ambush him and remove his trousers. Tucker, Benny and Alan shortcut Mr Baxter's runaround the block by using a bus. Mr Baxter reconciles with Benny and cancels his detention. Enough money has been raised for the outdoor centre, but who will win the tug of war?

Sutcliffe and Mooney seem to be having a lover's tiff, which pleases Cathy no end. Mr Hopwood is not pleased to find virtually no-ones come to the meeting about the outdoor centre - Doyle is blamed for doing nothing. Penny and Susi are determine to show how useless Doyle is as a council rep. They type a short piece for the school magazine, which is accepted at the last moment. The "Trading Post" makes a start with its hungry customers and sells out. Doyle finds out about the school magazine and confronts Penny, but she is rescued by Alan who has evidently taken a shine to Susi. The staff aren't amused by Penny's comments, worried because Doyle's father is on the council. All magazines are rounded up, and this annoys Andrew Stanton and Justin Bennett.

Doyle finds a market for the school's light bulbs, and it's increasingly difficult for Alan to find a place to smoke.

It's a case of too many cooks spoil the broth when it comes to catching the bike thieves, but perhaps Tucker will save the day. Tracy sees Mr. Sutcliffe and Miss Mooney holding hands outside a jewellers shop. Sally is visited in hospital by Tracey and Karen.