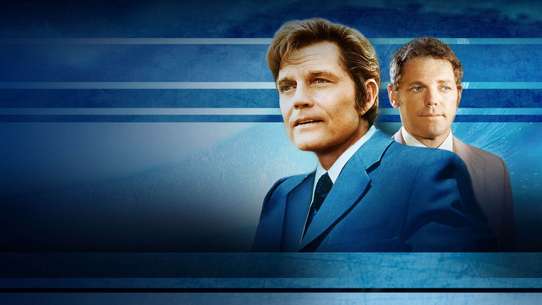 The BEST episodes of Hawaii Five-O

The investigations of Hawaii Five-0, an elite branch of the Hawaii State Police answerable only to the governor and headed by stalwart Steve McGarrett.

#1 - Murder Is A Taxing Affair

A corrupt federal agent who is tracking a man under indictment for tax evasion kills him for the $600,000 he is carrying, and then loses the money.

A amputee with no hands sets out to kill every police officer who contributed to his injury, and that includes Steve McGarrett.

The series concludes with the final showdown between McGarrett and Wo Fat. Three scientists have gone missing. They have one thing in common: they all attended a symposium that discussed a possible space-based, laser defense system. McGarrett impersonates a fourth scientist, Dr. Elton Raintree, who attended the same gathering and is soon abducted. Wo Fat is behind it all and wants the scientists to complete their work and produce such a device.

When a young female student is found murdered on campus, suspicions fall on her boyfriend but McGarrett senses that something is not right.

Five-O must deal with treason, murder and double-crosses in order to solve the case and prevent the U.S. from being flooded by fake currency.

When Five-O fail to prevent a series of thefts at dockside warehouses, an influential owner creates trouble for McGarrett.

Labouring under a ban on cooperation by native Hawaiians because of a Kahuna, McGarrett must try to prevent war on the streets...

McGarrett must protect a protect a mob underboss so he is able to testify against his superior, Joe Matsukino. However, Matsukino has many tricks up his sleeve to silence his former colleague permanently.

Danno is taken hostage by a Vietnam veteran who is suffering delusional flashbacks and sees everyone as forces sent to kill him.

Dominick Vashon, the patriarch of the clan, makes his attempt to bring down McGarrett and Five-O.

The son of the baseball player becomes the vital witness in a murder, but he is reluctant to tell either his father or Five-O of the crime.

Five seemingly good citizens with different motives band together to steal $6,000,000 while McGarrett is away on Maui at a trial.

McGarrett must try his utmost to foil Wo Fat's plans which include hostages and brainwashing.

After a government agent is murdered, McGarrett must identify the traitor in a scientific facility.

Chin Ho and Dan Williams are tracking a safecracker but he pulls a gun and Danno ends up shooting him. McGarrett takes his identity of Harry Brown and must infiltrate a sophisticated gang of international thieves.

A string of five murders of wealthy men leads McGarrett to a crooked inheritance scheme.

A local thug, Piro Manoa, is trying to create the impression of corruption in the Five-O force, and Duke is implicated in a murder. McGarrett and the team, with new recruit Ben Kokua, must save Duke's position and work out the plot of the organisation behind the false accusations.

Five-O's efforts to rescue a young boy from kidnappers go wrong when Kono is captured and beaten. An angry McGarrett must work out a way to rescue Kono without further endangering him.

An army sergeant and a office worker have a scam in which they use bar girls to claim G.I. widow benefits, and then murder them to take the cash. McGarrett and company must use the girls to get to the core of the plot.

Five-O must deal with the plans of a Neo Nazi organisation to kill Bobby Tamara, the "Hawaiian Kennedy".

The hunt for a high-rise killer is made more difficult for Five-O when a journalist offers to share his profits in exchange for the killer's story.

When the son of one of Steve's friends dies of an overdose, he goes after a doctor that he suspects of over-prescribing drugs.

A private detective is rescuing girls from prostitution, and using the opportunity to kill the pimps as well.

A vacationing heiress seems unconcerned when McGarrett warns her that someone is after her ruby.

Millicent Shand returns and claims that her niece's husband has faked his own death in order to get his hands on $500,000.