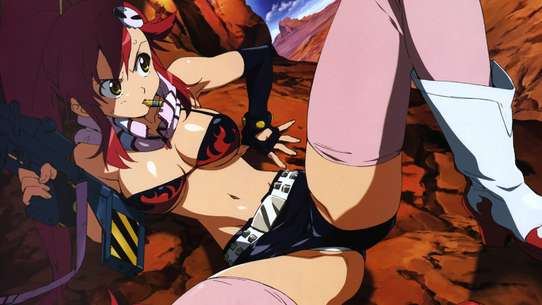 The BEST episodes of Gurren Lagann

In the distant future, people build their homes and raise domestic animals in subterranean caverns. As a result, they live in fear of the occasional earthquake and cave-in, and have been for hundreds of years. Jeeha is one such village. One day, a boy named Simon happens to find a small, shiny drill whilst digging to expand the village. At the same time, Kamina, a guy who believes that there is another land above the village, persuades a gangster to break through the ceiling in order to leave the cavern. Suddenly, an earthquake occurs and the ceiling collapses, followed by a big robot breaking through the ceiling. Kamina is now sure that there is a world above them. Recklessly, he begins to fight against the robot. At that moment, another person appears from the land above. It is a girl by the name of Yoko. With a rifle in hand, she had been tracking the robot. However, all she could do was distract it. Then, Simon shows what he had found to Kamina and Yoko.

The members of the Great Gurren Brigade were able to escape the Anti-Spiral's "Alternate Space Labyrinth", and Simon and Nia are reunited at last. By combining the power of the members, the Great Gurren Brigade creates the "Tengen Toppa Gurren-Lagann", a Gunmen of galactic proportions. Be prepared for the most epic battle in the universe. The battle to end all battles begins!

With the sacrifice of one of their important comrades, the Super Galactic Great Gurren is finally able to transform into the "Super Galactic Great Gurren Lagann". Now they stand a fighting chance against the Anti-Spirals. However the enemy then creates an "Alternate Space Labyrinth", to use their own memories and desires against them but an old friend appears to help.

Having just lost so many comrades to protect the "Super Galactic Great Gurren", they now find themselves trapped in an ocean of despair. The Great Gurren Brigade struggles to escape from the Death Spiral Field created by the Anti-Spirals, without success. Leeron and the Lord Genome system work together to come up with a way out but who will volunteer for this recklessly suicidal plan?

The reunited Great Gurren Brigade have broken through the heavens in order to protect humankind from the Anti-Spiral, however they still have the moon to worry about. When the situation becomes dire the Gurren-Lagann and the Arc-Gurren join together to form the massive Arc-Gurren-Lagann.

Kamina, Simon and the rest of the Great Gurren Brigade plan to take down Thymilph, one of the Four Divine Generals of the Spiral King, and his massive mobile Gunmen fortress, the Dai-Ganzan. Their plan involves having Simon using Lagann to take over the Dai-Ganzan the same way he fuses with the Gurren, but an something unexpected causes a great tragedy in the following battle.

#7 - You Are Someone Who Ought to Survive

The Arc-Gurren escape the Anti-Spiral attack, with only half the number of people they wanted however what awaits them in space is an even greater threat. Meanwhile Yoko has returned from her long absence, to rescue Simon and reunite the Great Gurren Brigade. The peaceful life that she previously led is revealed.

One week after preventing the moon's collision the Great Gurren Brigade have a conference to discuss what actions they must take, to ensure humanity's survival. Meanwhile, the depressed Rossiu returns to his old underground village, to think things through. That is when he ends up meeting the old village chief.

#9 - I Will Head Towards Tomorrow

The last of the Divine Generals have fallen and all that stands before the Great Gurren Brigade and victory, is the Imperial City Teppelin. However right before their eyes Teppelin collapses and reveals its true form, as a Gunman of gigantic proportions. Nia request to go along with Simon, in the Gurren-Lagann, to confront her father Lord Genome. First they must penetrate the impregnable defense.

Simon now being branded as a war criminal has been sentenced and what awaits him in prison is none other than Viral, his new cellmate. There's only a little over a week until the moon will crush the Earth and the evacuation to the Arc-Gurren is progressing slowly. However Leeron's shocking simulation, to what will happen when the moon falls, only spells more bad news for humankind.

Now above ground Kamina, Simon and Yoko find themselves faced with 2 more gunmen. They dispatch these 1 of them with the help of people from Yoko's home of Ritona town. Ritona is soon under attack by 3 more Gunmen, but some quick (and insane) thinking by Kamina saves them...

#12 - We Will Survive by Any Means Necessary

With news that the moon will fall in 3 weeks known across the city, riots have broken out. So to soothe the public opinion, Rossiu puts Simon him under arrest. Meanwhile Leeron is trying figure out a way to defeat the Mugan without causing so much destruction. Later on Simon is taken to trial but during this the Anti-Spirals launch a large scale attack on Rittona.

Following the shocking declaration by Nia, everyone is in disarray, especially Simon who can't seem to find her. Rossiu has finally completed his secret project, to awaken Lord Genome in the form of data and learn some of the mysteries of the world.

One month has past since the battle with Cytomander and Simon and Yoko pay one last visit to Kamina burial site. Because Great Gurren Brigade has arrived at the outskirts of Imperial City Teppelin, meaning it is finally time for the final battle to commence. Nevertheless before they even aim towards the city the must first deal with the combined full-scale attack of Cytomander and Guame's forces.

Seven years have past, since the capture of Teppelin and under Simon's leadership, a new capital city has been built from the remnants of the royal capital. As the humans being to prosper and including the lives of those who helped make it all happen. However, these peaceful times come to end when the threat mentioned in Lord Genome's last words starts to reveal itself.

The Great Gurren Brigade are now on their way to Beastmen's capital city, Teppelin but there's a vast ocean in there way. The only way for them to get across is for the Dai-Gurren to be modified, so while they wait everyone goes to chill out at the beach. Once preparations are complete, the Great Gurren Brigade begins their cruise but there's an ambush waiting for them.

Following Adiane failed attempt to destroy the Great Gurren Brigade another member of the Four Divine Generals, Guame decides to take it upon himself to take up this task. The Brigade later receives a distress call from a village that is supposedly begin attacked by Ganmen but this is actually a trap laid out by Guame.

With Nia having become more welcome in the Great Gurren Brigade, feels the need to contribute something. She decides to cook for them but just before they could get a taste Cytomander the Swift, the fourth member of the Divine Generals, launches an aerial attack. With Rossiu currently out of commission, Yoko accompanies Simon, on the Gurren-Lagann, to lead the counter-attack.

#19 - Bust Through the Heavens with Your Drill!

Kamina is jailed for trying to escape to the surface. Suddenly, a mysterious woman named Yoko comes from aboves to the underground village while fighting a giant robot. Simon helps fend off the robot with the help of his new "Gunmen", which he found while drilling around.

Simon, Kamina, and Yoko encounter a beastman by the name of Viral while they are hunting. They get into a fight and learn that his Gunman has 2 faces, the normal Gunman head and another head on top. He dispatches them at the field, but Viral says he will destroy them at the village tomorrow. Kamina and Simon have to find a way to beat a person who is a far superior pilot...

The Gurren Brigade falls into an underground village where Gunmen are called Face gods. They meet a young man by the name of Rossiu and the head priest of the village. The head priest is very strict in the running of his village and Kamina has a big problem with the way things are run. Things get a lot worse when another Gunmen falls under ground.

The death of Thymilph has brought about the concern of the Spiral King (Lord Genome), meanwhile the Great Gurren Brigade managed to take control of the enemy fortress, but are still mourning other the death of one of their own. Simon is greatly affected by it and falls into a deep depression. After falling off a cliff and into a deep valley, he later notices a Gunman throw a capsule into the murky valley. He manages to open it only to discover a young human girl named Nia.

Following their ordeal at the hot springs, Viral appears before the Gurren Brigade to challenge Kamina and in the midst of their fight more details of the Beastman Empire are revealed. Just when things couldn't get more out of hand, one of the Four Divine Generals named Thymilph, arrives to support in a massive mobile Gunmen fortress, the Dai-Ganzan. Even the Gurren-Lagann may not stand a chance against this.

Nia true identity is revealed, as she flaunts her authority to get rid of another one of the Four Divine Generals, Adiane. The members of the Great Gurren Brigade are now suspicious of Nia and her true intentions but she is only concerned about the depressed Simon. Adiane later returns to finish them all off, with Lord Genome's blessing.

After leaving the underground with their new brigade members, Rossiu, Gimmy and Darry, they get back on track to find the return point programmed into the Gurren. They soon find that the enemy return point is mobile. They find themselves in a weird fog and wind up at a hotspring, but there is something fishy about this particular hot spring... This is also a recap episode.

The Irregular at Magic High School