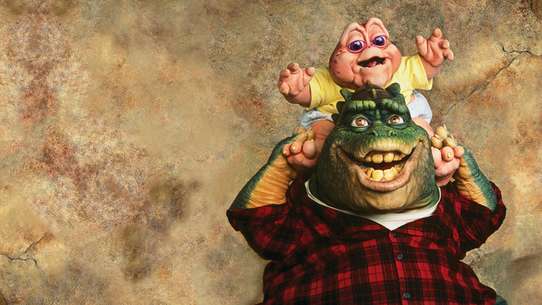 The BEST episodes of Dinosaurs

Every episode of Dinosaurs ever, ranked from best to worst by thousands of votes from fans of the show. The best episodes of Dinosaurs!

Dinosaurs follows the life of a family of dinosaurs, living in a modern world. They have TV's, fridges, microwaves, and every modern convenience. The Dinosaurs are an animatronics stone-age working-class family created by Jim Henson for Disney. Incredibly overweight, even for a dinosaur, Earl Sinclair is married to Fran and tries/fails to support 14-year-old valley girl Charlene, 16-year-old Robbie (whose crest eventually turns into a Mohawk and gets dyed purple), widowed, cranky Grandma Ethel, and terrible-twos Baby, the true master of the house. Sharp social commentary is featured surprisingly often; Earl is a tree-pusher for the Wesayso Development Corp., which regularly implements schemes to screw their workers even more and destroy the world for marginal profit increment. Chilled but live prey are kept in the refrigerator and are helpful when you can't find the milk, and caveman Humans make occasional appearances as wild animals and pets.

#1 - The Greatest Story Ever Sold

Fundamental questions about the meaning of existence plague the population, so the Elders dictate a belief system called "Potatoism," which Robbie thinks is just plain nuts.

Baby has bad thoughts in his mind after he with Earl and Robbie watched a scary monster movie. Baby later goes to bed and fears that a monster is under the bed. Earl and Fran stay up to keep Baby company, they lose alot of sleep and decide to go to a motel to get one good night sleep and then they will be back. Which leaves Robbie and Charlene with the house to themselves. Which is ruin when Charlene goes to Baby's room and is captured under the bed. Which later leaves Robbie to go down under the Baby's bed to save Charlene from the monster named Deskter.

Robbie dates Richfield's daughter, whose gluttonous reputation gives Robbie food for thought: he may be her next meal.

Earl assumes the powers of a superhero and intends to put them to good use, but he's powerless before the Wesayso Corp., to which he's contractually bound to use his might.

Earl signs Robbie into a Carnivore celebration festival, but Robbie is very outraged that his father putted him in that festival when he never told his family that he was actually a herbivore. When Fran and Earl find out that he is, they become sad with tears which left Earl no choice but to find Robbie and to teach him about the basic food chain life and the food life. Without knowing with mist and a hugh monster in there way, Robbie is eaten. Earl returns home to tell Fran about the tragedy but Fran demands Earl to go back and save Robbie from the monster. Earl and Fran returned to the misty forest where Robbie was eaten. Fran later told the monster that popped up to eat Earl. Earl enters the stomach of the monster, and the argument between father and son begins untill Earl realizes that he his smart enough to let his son Robbie eat whatever he wants. With a hug the monster who talks says 'cut it out'. Then Earl and Robbie have the smartest plan to get out of the monster's body with

In this fairy tale episode, Ethyl tells Baby a story about a tree pusher Earl who was about to push down a spirit tree which switched his soul for him become a tree and the spirit tree to become Earl. When Roy brings Spirit home to the Sinclair family, he can't help to understand what has happened to him, when Earl realizes that he's stuck in the tree. Fran later believes the Spirit when he tells her that she is not Earl and that Earl is in the tree. After words, Fran goes to find Earl and Spirit after last night being taken away from the house by the WeSay So Policemens. Spirit switched Earl's soul back to were it belongs. And everything was over with but the tree with the Spirit in it was destoryed.

Earl thinks he's moving up the ladder as he and the family await a dinner with Richfield, while Robbie brings home a ""pet"" human, who's several evolutionary rungs below the Sinclairs.

Baby just caused alot of drama after opening the refrigerador when General Chow told him a lie in order ot take over the Sinclair house. Charlene gets a warning message that she must order his demands untill Robbie hears the news the two both immediatelly try to find Baby but are captured by Chow and his gang of food. Charlene then has the plan to let chow touch the Baby's cheek for him to blast and attack the food, ordering Chow and his food to go back in the refrigerador. Meanwhile; Earl is trying get closer with Fran again on a romantic date, but is ruined when Earl uses 'Numbgum"" for his mout to be very numb after accidently leaving his 'Dino-Mint' at home with the Baby.

Charlene finally gets her tail grown, which whips up strange feelings in Earl, whose little girl is no longer so little. But makes him understand that she's capable of having her first tail grown.

Earl's a real company man -- in fact he might as well be married to it -- after WESAYSO insists Roy replace Earl as the father of the Sinclairs, who are selected as WESAYSO's spokesfamily.

In this first episode of the series, Earl Sinclair talks to his born son about how his life was before he was born. he talks to him about the stress between his family and how his wife Fran Sinclair had been dealing with a lot of troubles and situations over the past. Earl also talks about how he wanted his boss B.P. Richfield to give him a first raise.

#13 - The Last Temptation of Ethyl

Earl thinks Ethyl has died, and he takes the opportunity to bury her. But to his chagrin, she's sent back from the great beyond with the lowdown on the afterlife.

After weeks and weeks of Georgie, Georgie, GEORGIE! Earl snaps and destroys one of Baby's tapes. To make up for it, Earl promises to get the Baby a Georgie hug. When Earl inadvertently realizes he sounds like Georgie, he makes a costume and pretends to be Georgie for the Baby... and ends up in jail?!

It's time for the big howl for the next dinosaur generation, but Robbie questions howling as a rite of passage. Earl forces Robbie to do the howling but Robbie still doesn't see the reason why he should howl, when he goes to the top of the mountain to get ready for his howl, he refuses to howl and knows that nothing is going to happen. Meanwhile; Earl friendship with Roy is becoming very serious when the two fight over after Roy was actually eating his own food and minding his own business that causes earl to be very selfish and vulnerable.

Earl gleefully awaits ""Hurling Day"" when he'll have the ritual honor of heaving his mother-in-law into the tar pits, but Robbie thinks the tradition should be chucked.

Moving on into the second season, Fran is actually getting a little tired becuase she's doing household choirs as usual. When she leaves Robbie and Charlene with Baby for them to watch him and make sure that he eats his breakfast, the two run-off leaving Baby alone in the kitchen. Baby feels evily happy and decides to sneak into the refrigerator to get some good sugar. When he get's too much sugar, Baby loses his nerves and becomes absolutely hyper after Earl and Fran walks in and see's the mess. Fran immediately takes Baby to the doctor to find the solution to the problem. But it was never solved except when Robbie and Charlene knew that he ate alot of sugar for him to grow a golden horn. While Earl is being teased at work, Ethyl recieves a scroll when a black dinosaur gives her informing Earl and Baby to meet in the Cave of Destiny. Baby then becomes a popular ruler when everyone in Pangea come to respect him. When the dinosaur in a black coat returns, he demands that the Baby comes

Earl's blood runs colder and outraged when a monstrous male who notices Fran in the supermarket challenges him to a fight to the death for her -- Earl makes no backup but to except the challenge and the battle later takes place in front of his house. Earl quickly attacks hims and Fran stops everything telling Gary to stay away from her, her family and her life.

Monica gets Fran thinking about the state of her union with Earl, and she addresses the issue by considering not renewing their marriage license.

Earl buys Fran two grapdelites, a rare delicacy that they'll dine on for their anniversary, until Robbie meets the goodies and they explain that they are the last two of their kind. But later when B.P. Richfield finds out that Earl's got the grapdelites for his anniversary, he demands to get it from him or else theres a deadly consequence for him.

Fran feels very depressed after staying up all night trying to keep Baby from being awake and trying to go to sleep. That morning Baby went to sleep and Fran was outraged and upset that she did not get enough sleep. Earl and Roy later tries to find out what's wrong with Fran's life and they believe that if she wasen't with the children she would have a perfect life. Later, Farn goes to her mothers to spend some time with her, while Earl tries to make dinner. Fran later comes home to tell Earl that there is defidently something wrong in her life. When Earl watches TV, he thinks that the only way to cheer Fran up again is the mating dance.

#22 - Charlene and Her Amazing Humans

Charlene grabs the attention of her family and other audiences with her amazing performing humans. But it's not that easy when she finds out the mother wants her children back from Charlene and Robbie thinks that she's pushing them to far to make her very famous and become a superstar. When she later appears on the State Fair she confesses about what was very wrong for her and everyone else to be doing.

A cosmic calamity wrecks the Sinclairs' TV, which is fine by Fran, but Earl, hoping to win a new set, has the bright idea to have them appear on the game show ""Family Challenge"" to maybe win a new one.

Earl officially becomes injured after a night being stucked on a tree that injured his foot. So in order to get paid for the damage Robbie helps Earl get justice from Richfield by taking WESAYSO to court but with a shocking rewarded suprise for Earl.

A shocking secret is revealed when the Sinclair family acuses that Baby Sinclair is not there real baby. This makes Fran outraged to believe the story that she decides to go to the doctors to find the results of which baby is theres.The results is that the Molehill's baby is theres and the Sinclairs baby belongs to the Molehills. But it wasen't a happy ending for Fran when she battles to get Baby back into the family.

Pinky and the Brain