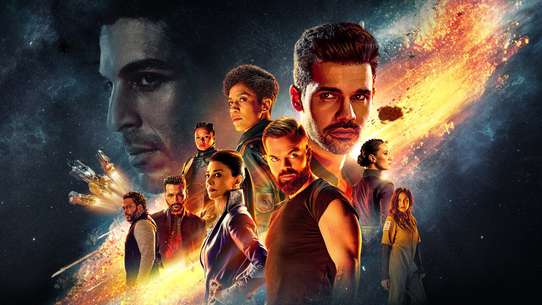 The BEST episodes of The Expanse

Every episode of The Expanse ever, ranked from best to worst by thousands of votes from fans of the show. The best episodes of The Expanse!

Two hundred years in the future, in a fully colonized solar system, police detective Josephus Miller is given the assignment to find a missing young woman, Julie Mao. Joining his task is James Holden, former first officer of an ice freighter who is involved in an incident caused by the tense relationship between Earth, Mars and the Belt. Far from their struggles in space, United Nations executive Chrisjen Avasarala works to prevent war between Earth and Mars. Soon the three find out that the missing woman is connected to a vast conspiracy that threatens all humanity.

Holden and his allies must stop Ashford and his team from destroying the Ring, and perhaps all of humanity.

Inners and Belters fight side by side with the crew of the Rocinante in a last, massive, desperate battle with Marco and his Free Navy, with the fate of the Solar System, the Ring Gates, and of all humanity hanging in the balance.

Holden and the Roci face off against Marco's forces and Drummer. Alex and Bobbie attempt a dangerous rescue of Naomi, and the balance of power in the Solar System shifts.

The final battle between Earth and Mars threatens the very future of humanity. A new monster is unleashed on Prospero Station. Anna receives the smoking gun she needs.

Ashford closes in on an enemy while uncovering a dangerous plot. Avasarala faces a crossroads in her personal and political life. The Roci crew works to reestablish life on Ilus in the wake of a deadly catastrophe.

As survivors arrive to the Behemoth, two factions form over how to handle a life-or-death threat. Holden grapples with what he's seen and the choices he must make.

The Rocinante chases the asteroid Eros as it hurtles towards Earth.

Holden and Miller race to save Ilus. Murtry puts his endgame into motion, putting the Roci crew’s lives at risk.

The search for Prax's daughter comes to a head; Admiral Souther's men plan for mutiny aboard the Agatha King.

The Roci crew must fight to save the ship.

Holden sees past, present, and future. A ghost from Melba's past threatens her mission. Bobbie struggles to trust an old friend as she leads a group into uncharted territory.

An old friend taunts Holden with the answers he seeks. Naomi struggles to fit in. A mysterious low-level tech aboard the Thomas Prince enacts a terrifying plan.

Amos and Clarissa are trapped in a collapsed building. Naomi contends with her old family. Holden assembles a new crew on the Roci. Alex and Bobbie make a dangerous discovery in the Belt.

The Rocinante answers an unexpected distress signal. Bobbie and Avasarala find themselves being hunted by a mysterious captor. UN Secretary-General Sorrento-Gillis brings in a colleague from his past to lend an ear during this crucial time of war.

Miller, Holden and his crew fight their way to the Rocinante to escape Eros. On Earth, Avasarala fears for the stability of Earth's government and her family's safety.

Miller devises a dangerous plan to eradicate what's left of the protomolecule on Eros.

Bobbie makes a decision that changes her life forever.

Drummer and Ashford find themselves trapped with few options for survival. Anna tends to the wounded masses as Melba continues to hunt down her prey. The Rocinante crew struggles to survive as Naomi reunites with her true family.

A discovery pushes Naomi and Holden apart and sets the Roci crew against each other.

The Rocinante tends to wounded Martian soldiers in exchange for supplies; Avasarala struggles with how to disseminate a key piece of evidence despite being in hiding.

Paths converge on Ceres when Drummer and her fleet arrive to aid the relief effort. Holden tries to convince Avasarala to release crucial information that might avert catastrophe, but she has her own request of him. As Amos and Bobbie get a little R&R at the station, Naomi has a difficult and long-awaited reunion.

Earth and Mars search for answers in the aftermath of the asteroid collision.

Avasarala, with the Combined Fleet of Earth and Mars, takes the war to Marco. Filip and Marco's relationship is tested. The war becomes more perilous and personal for Holden and Naomi when the Rocinante is suddenly forced into a battle.

Avasarala faces fallout for the UN’s military mission. Ashford and Drummer makes big decisions about their future within the OPA. A spreading illness on Ilus takes a toll on Amos. Alex and Naomi’s attempt to rescue the Barb turns desperate.