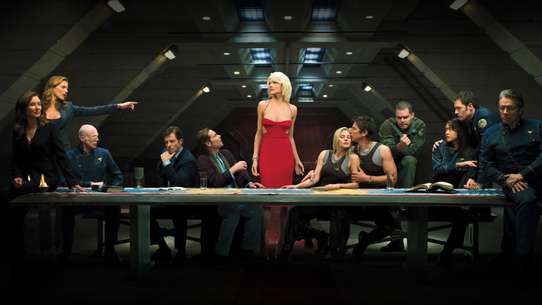 The BEST episodes of Battlestar Galactica (2003)

In a distant part of the universe, a civilization of humans live on planets known as the Twelve Colonies. In the past, the Colonies have been at war with a cybernetic race known as the Cylons. 40 years after the first war the Cylons launch a devastating attack on the Colonies. The only military ship that survived the attack takes up the task of leading a small fugitive fleet of survivors into space in search of a fabled refuge known as Earth.

Adama and the Galactica crew stake the survival of the human race on their plan to rescue Hera from the Cylon colony in this, the series finale.

D'Anna holds President Roslin and other Colonials hostage in order to draw out the Final Five from the Colonial fleet. Col. Tigh believes he has the solution to end the standoff.

As Baltar's trial comes to a conclusion, key members of the fleet discover that they may be the Final Five Cylons. Tigh attempts to decipher the strange music he is hearing in his head, while a Cylon fleet approaches.

Tigh must decide the fate of his wife Ellen after the assistance she rendered to the Cylons. Lee struggles with his assignment to protect the civilian fleet on its journey toward Earth while Adama returns to New Caprica with just the Galactica. The Resistance coordinates an attack on the Cylons just as Galactica arrives. As the Cylons begin to lose control, Number Three (D'Anna Biers) vows to put a final end to the New Caprican experiment.

President Roslin faces off against Tom Zarek and Lt. Gaeta as they try to take control of the Colonial fleet. Both the alliance with the rebel Cylons and Adama's life are at stake.

When Commander Adama learns that Kara disobeyed orders and Jumped to Caprica on orders from President Roslin, he demands the president's resignation, with the implied threat of a military coup. Roslin refuses his demand and sparks a confrontation.

Loyalties are made clear when Gaeta orchestrates a coup d'état of the Adama regime. Both prisoners and lives are taken as many of the fed up people work to take over Galactica.

When Baltar wins the vote, Roslin considers stealing the election because she believes he is a Cylon collaborator.

The struggle between Adama and Cain is temporarily put on hold while the two Battlestars combine forces for an assault on the Cylon Resurrection Ship. Apollo faces a momentous decision and Baltar takes an interest in Gina, the Cylon prisoner.

The Battlestars Galactica and Pegasus face a new Cylon target, a "Resurrection" ship, while a power struggle threatens to result in all-out war among the human fleet.

With Galactica on the verge of falling apart, Admiral Adama readies the ship for what could be its final mission, as Baltar's Six warns that humanity's final chapter is near.

Kara struggles with the foreboding prediction of the Cylon Hybrid, while Adama and the Colonial fleet face despair over their shocking discovery.

Battlestar Galactica was not the only Battlestar to have survived the cylon attack, The Battlestar Pegasus also survived.

As its fuel supply dwindles, the fleet must seek out a new supply of tylium ore or risk becoming sitting ducks to any Cylon attack. A recon patrol finds an asteroid full of the fuel, but there's a catch — the Cylons have found it first and established a heavily guarded refining plant.

Colonial Viper pilots plan an attack on the Resurrection Hub with their Cylon rebel allies.

As Sam Anders recovers from his head injury onboard the Galactica, he begins to remember events from ancient Earth. The Final Cylon struggles with the fallout from the Final Five's former plans. One of the humanoid Cylons vows to get revenge for being created in the image of Man. Tyrol informs Admiral Adama about the extensive structural damage on the Galactica.

With Adama out of action, Colonel Tigh takes his position as commander of the Galactica. Boomer is in jail, and the cat's out of the bag - she's a Cylon.

The dying President Roslin and the aggressive Viper pilot Kara Thrace try to accept the new terms of the relationship with the Cylons.

Sharon informs Adama that the Galatica has been infected with a computer virus that is tampering with the basic ship functions and is scanning them for weaknesses. All this is preparation for a major assault by the Cylon Raiders. So with the clock ticking

In the wake of the Cylon sneak attack, the ragtag fleet of human survivors is forced to play a deadly game of cat-and-mouse with their pursuers. Every 33 minutes, they make a jump to a new location. And every 33 minutes, the Cylons manage to find them. The pilots are on the brink of exhaustion, relying on artificial stimulants to keep fighting, and the civilians are beginning to doubt the leadership of Commander Adama and President Roslin.

When Lt. Kara Thrace goes missing in action after encountering a Cylon patrol while on a training mission, Commander Adama feels responsible — especially in light of her recent admission that she blames herself for his son Zak's death.

Tyrol discovers the Temple of Five on the algae planet. The temple may hold the Eye of Jupiter, which is believed to show the way to Earth. The Cylons take a keen interest in the discovery. Athena learns that her baby, Hera, may still be alive. Lee relies on Anders to help build civilian support for the protection of the Eye. His relationship with Kara complicates matters.

Adama heads to Kobol to find Roslin, reassembles the fleet and heads down to Kobol himself to find the presidential party in search of the "Tomb of Athena" which allegedly leads to Earth. Apollo hangs out with Starbuck , Zarek tries to keep his cronie off plotting with Boomer who is unaware of tension building between Helo and Tyrol.

President Roslin faces challenges as the Colonials plot with Cylon rebels to destroy a Resurrection Hub.

Sharon helps the Resistance on New Caprica as Adama leads Galactica on a dangerous rescue operation. Tyrol races to save Cally from the execution squad. Meanwhile Anders uncovers treachery among the humans. D'Anna Biers/Number Three meets the Oracle Selloi after having strange dreams about the temple.