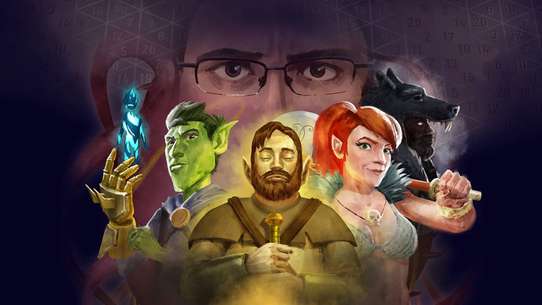 The BEST episodes of HarmonQuest

Every episode of HarmonQuest ever, ranked from best to worst by thousands of votes from fans of the show. The best episodes of HarmonQuest!

HarmonQuest is a fantasy comedy adventure series that melds live action comedians riffing on a stage in front of a live studio audience with animated forays into a fantasy adventure role-playing game. The intrepid comedians, Dan Harmon, Jeff Davis, and Erin McGathy, along with a rotating special guest member, gather around a kitchen table and attempt to play the game and fail in hilarious fashion, to the chagrin of their adjudicator-referee- Game Master Spencer Crittenden.

In an effort to stop Celty’s evil ritual, our heroes travel to the center of it all, the Capital City of Forlona! A lost little boy informs the gang of recent catastrophe in the city, and a quest for his parents leads them into the royal Castle to beg for the King’s aid.

After failing to foil the Heralds' evil plot, our heroes must fina a way to stop the Great Manticore. Returning to the damaged and changed Earthscar, they seek to prevent the creature from opening a gateway into the...

Fondue, Beur, and their new friend Chip meet with a powerful Sorcerer who brings them to the hellish Demon Realm on their quest to find Boneweevil, but our heroes are soon overwhelmed by the armies of Hell.

Entering the Final Dungeon, our heroes meet the Janitor of the crumbling temple, who snarkily guides them through, charging high prices for his dubious assistance. They face a powerful foe and prepare to stop the Heralds of the Manticore.

With nowhere to go, our heroes are saved by an old friend of Boneweevil. The bizarre and awkward tooth beast whisks the gang into the Abyss for some high stakes bar trivia with a grim reaper.

Entering the mystical magical Doorest of Fores, our heroes encounter a strange forest dwelling Halfling. Together they face the strange and hacky humor of the Forest Guardian, as well as his strange and hacky trials to earn a blessing.

Forced underground by the Puppet King’s assault, our heroes are trapped with an army of hungry goblins. With the help of a sassy new ally, the gang adventures through flooded subterranean caverns choked by fungus as they try to find a way out of their cavernous captivity.

After escaping form prison, our heroes fled to the desert. They meet with a strange and magical sandwich merchant harried by ghostly assailants, but all is not as it seems, and that many sandwiches turns out to be too good to be true.

After being captures by Vortheon on the high seas, our heroes are thrown into prison, where they meet an odd who hatches a plan to slip their bonds and escape from prison, to resume their quest.

After defeating the caretaker of the abyss, our heroes return to Earth, where much has changed. Finding some sand nomads and saving them from marauding beasts, the gang is treated to tea, and discover an evil presence has followed them back from the Demon Realm.

Fondue and friends partake in the Festival of Restoration, but are interrupted by a barbarian chased by an evil cult. After unleashing evil upon the world, Fondue takes up a quest to save the world from the Heralds of the Manticore.

Leaving the Stone Saw Mines, the gang enters Freshport, where they enlist the help of a dock-working bard to warn the city of the evils unleashed by the Heralds of the Manticore. They infiltrate a party to chat up a union boss.

After coming this whole way, the gang discovers the Heralds of the Manticore preparing a ritual to unleash the Great Manticore. Our heroes face off with the cult in a final assault in the hopes of preventing the summoning ritual.

Trapped in the Demon Realm after the death of Celty, a lake of mystery juice transmutes Fondue and friends into various beasts. In order to reverse their curse, the gang seeks the help of a powerful and strange swamp witch.

On a journey to warn the nearby town of the evil that threatens the world, our heroes take a shortcut through the Stone Saw Mines, where they encounter the damage and devastation wrought by the evils of the cult.

#16 - The Barely Cursed Bazaar of Commerce

After learning of Celty’s re-appearance, our heroes follow the clues towards the city of Forlona, but a newly formed river of lava prevents their passage. Luckily, a mysterious merchant tent and its magical shopkeeper are here to help, but she seems to keep strange wares and stranger secrets.

After escaping Freshport, our heroes find them selves on a merchant ship. After chatting up the captain, they hitch a ride together, but are attacked by shark people, before being boarded by the vessel of a familiar foe.

Our heroes crash land in the virtuous harmony, where an angelic guardian helps them find the Beast of the beginning, and the gang fights an old foe over the fate of the multiverse.

On Boneweevil's suggestion the gang heads to Bonebreak Village, the last refuge of Hell's survivors. There, they discover their way home might just be a mysterious spirit locked away in one of the Demon Realm's many Nether-Jails.

A lethal encounter sets our party back, but after being rejoined by a familiar face from their past, our heroes face Celty and take on the deadly enchantress in her flying fortress. Can the gang finally put a stop to Celty’s evil schemes, and what even were those evil schemes anyway?

On their journey back to Ivory to seek the beast of Beginning, our heroes rest in Shatternine Village, where another adventuring party has been set to work helping the town uncover the source of a mysterious rage virus infecting the town with violent madness.

After being captured by the Gray Wraith, our heroes find themselves in an otherworldly plane of Imperium Judgments! There they face trial at the hands of a stern prosecutor, an impenetrable judge, and the help of a plucky and charming defense attorney.

Feldspa the Royal Vizier beseeches Fondue and friends for their help in destroying the Keystone Obelisk, the lynchpin of Celty’s Obelisk Ritual. The gang joins forces with a deadly arsonist to assault the Obelisk as they attempt to enter the Obelisk to destroy its core.

Charles returns from the Demon Realm with an old flame of Beur’s. Our heroes assault Celty’s floating castle with the help of the dragon, but after getting split up, Boneweevil and Fondue are at each other’s throats, and their bickering threatens the future of their heroes’ journey.

Our heroes return to Ivory Quay, but the bone tree barbarian’s ancestral home has been warped, corrupted beyond recognition. The gang fights their way to the Beast of Beginning, disgusted and confused at the horrors their temporal tampering has unleashed.