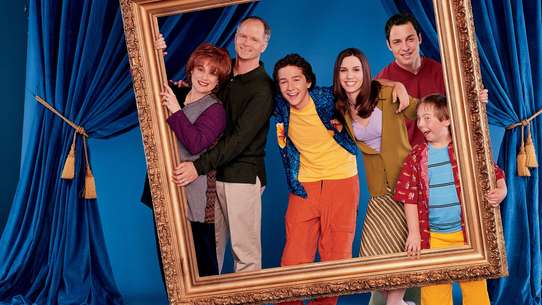 The BEST episodes of Even Stevens

The Stevens are a middle-class family living in Sacramento, CA. Husband and father Steve is a successful attorney. Wife and mother Eileen is a state Senator. Their oldest child Donnie ia a high-school sports legend. Ren, an 8th-grader, is just about the perfect daughter. She makes the best grades, she's popular, she does volunteer work and other extracurricular tasks by the score. Her brother Louis, in the 7th grade, is her opposite. He likes to sleep late, he's messy, his grades are not good, he's frequently in detention and he seems to take nothing seriously. But he is serious about finding something of his own that he can do to put himself on a par with the rest of his overachieving family. Though he and Ren occasionally soften their attitudes toward each other, at any given moment the're likely to be fighting like mongoose and cobra.

Ren is less than thrilled at the prospect of reuniting with her old friend Nelson Minkler, so she ditches their dinner date to attend a skate party instead. Louis and Alan make crank calls to their friends and neighbors.

Ren's perfect life at school starts to unravel when it becomes known that she's in danger of getting a “C” in shop class. Louis turns the janitor's closet into a party room.

Louis accepts an assistant-coach gig with a Little League basketball team and scores big points with the players, while Ren attempts to win a kiss, rather than a high five, from her jock boyfriend.

Things are not sweet between Louis and Twitty, who've become bitter competitors in the school's chocolate sale.

Louis quits the band he and Twitty started after Twitty selects Ren to be the lead singer. Later, the two groups duke it out in a Battle of the Bands competition.

Louis and Twitty attempt to be part of the hip crowd at school by trying to track down pairs of the hottest sneakers, which have been sold out all over town.

Louis tries to turn the tables on the annual day at school when the eighth graders try to harass the seventh graders---but his plan backfires.

Ren spies a first-class maneater eyeing Bobby on a bird-watching field trip. Louis and Twitty's actions are put under a magnifying glass by Tom when he suspects that they value homemade pizza over his friendship.

A practical joke by Louis may hurt Donnie's scholarship chances. Ren takes Bean under her wing in hopes that he will behave.

Louis participates in a “nap for the needy” charity fund-raiser at school.

Afraid of looking foolish at the school dance, Louis takes a dance lesson. But when he gets to the event, he can't find the nerve to try his new moves. Ren decides to approach the guy she has a crush on at the same dance.

Louis and his new neighbor, Beans, raise quick money to buy a suit of armor by videotaping Ren's sleepover party and selling copies to their friends.

Louis tries his hand at moviemaking with his film “Three Eyes Wide Shut,” a sci-fi romance about a cowboy and an alien.

Ren organizes a protest at school after her school picture turns out unflattering and she is refused a retake by the principal.

Louis finds a valuable “Roaring Drycon” card for sale online, but the seller will only trade for a date with Ren. Meanwhile, Ren needs volunteer time to be the #1 volunteer in school, which Louis decides to use to his advantage.

Ren lands in detention following a string of events that begins with Louis unplugging her alarm clock.

Louis experiences the wrath of the Cafeteria Lady after he becomes food critic for the school's TV newsmagazine show.

After Louis is grounded for accidentally destroying the Hanukkah gifts, a strange visitor shows him what the Stevens home would be like if he hadn't been born.

Ren and Ruby work at the “hottest” food spot in the mall, where their friendship is strained when one is promoted over the other. Also, Louis takes drum lessons from an aging rock and roller.

Louis and Tawny declare themselves an item after a chance kiss. But their romance gets off to a rocky start when Tawny's role in the school play calls for her to kiss another boy.

Louis sets up surveillance equipment at home after one of his videos disappears. But what's captured on tape is more surprising than the theft.

Louis reaps the consequences of turning his back on his friends after he's accepted into the popular crowd at school.

A feverish Ren suffers through unexplainable outbreaks of song and dance by her peers in order to win a perfect attendance award, while Louis tries to talk his way out of sixth-period gym.

Desperate to be a part of the school talent show, Louis teams with Ren to come up with a brother-sister act. But while he's thinking slapstick comedy, she's got her heart on a musical duet.

Louis proves he has a special way with animals after he takes a dog-sitting job to buy a used frozen-drink machine.