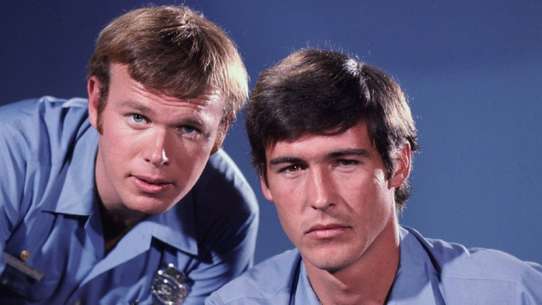 The BEST episodes of Emergency!

Every episode of Emergency! ever, ranked from best to worst by thousands of votes from fans of the show. The best episodes of Emergency!!

Emergency! is a reality-based show that takes a good look at what goes on in the daily lives of the fire department and hospital work, and everyday life-and-happenings. The series focuses on two locations: LA Fire Station 51 with paramedics John Gage and Roy DeSoto, and Rampart General Hospital with Doctors Kelly Brackett and Joe Early and Nurse Dixie McCall. Another work of Jack Webb's Mark VII Limited, the show was based on the paramedic program that started in Los Angeles, California in 1969. Produced in cooperation with the Los Angeles County Fire Department and Department of Hospitals, it is well-regarded for its realism. Senator Alan Cranston actually praised the show for informing the public about the value of funding such programs!

Roy and John try to go fishing in Santa Rosa County, but are delayed when they rescue climbers from a cliff face and a fishing boat blows up. They help the sheriff come up with ideas for implementing emergency medical services in his county

Returning from a fishing trip, Roy, John, and Chet help the victims of a car accident. On duty, after rescuing some joyriders whose car went over a cliff, John is bitten by a rattlesnake.

Chet and Marco are drafted to sort out a filing dilemma caused by computer error. A kid falls in a storm drain and nearly drowns. The paramedics experience problems with a new supply nurse. A janitor drinks samples of an archeologists' Mesopotamian wine. The firemen respond to a warehouse fire.

Roy's mother-in-law is scheduled for her annual visit. A car runs into the back of a truck. Drs. Brackett and Early argue over attending a convention in Acapulco. An elderly man becomes ill from drinking a quack's remedy. When a fire breaks out in a hospital room, the occupant goes into cardiac arrest. A boy's model rocket sparks a house fire.

A sporadic electrical short plagues the squad but Roy and John are convinced they can fix it. A back-to-nature couple is ordered to cut back on their shrubbery; the wife is discovered to have a variant of anthrax. The paramedics rescue a man trapped at the top of a tower.

Roy spends the night at John's place while his house is being fumigated, which is one night too many. A woman is trapped inside a car while it burns around her; the ambulance carrying Roy and the victim is hit by a car. A man having a heart attack refuses to leave a poker game unless John agrees to play out the man's hand. An explosion at an abandoned refinery injures several workers.

A man is injured when his chimney explodes. A brash young intern at Rampart thinks he knows more than the paramedics and makes a near-fatal diagnosis of a heart patient; Dr. Brackett send him on a ride-along with Squad 51. A girl gets her hand stuck in a mailbox. Johnny and Roy must rescue a heart attack victim trapped on an oil refinery tower — in the midst of an explosive structure fire.

After John and Roy rescue an elderly transient from a structure fire, Chet and Marco discover $80,000 in the man's mattress. A bride faints while walking down the aisle. Dixie administers a tetanus shot to a young boy. The transient tries to give the firemen a reward. An elderly woman loses her cat. A plane crashes into a warehouse.T

A boat has an explosion aboard en route to the marina. John obsesses about the lack of night runs and can't sleep. A man and his son are injured when they swerve to avoid a dog. Doctors race against time to save a marijuana smoker dying of an unidentifiable malady. A worker is pinned in a loading dock by a semi. A man child fall into a gravel pit.

Everyone gives Roy advice on where to go on vacation. Roy gets dizzy during a fire at a singles club. An instructor is injured during a self-defense class. A man with stomach pains is brought into Rampart. The firemen rescue two hang glider pilots from the face of a cliff.

Roy passes the Engineer's test, but accepting the promotion will mean leaving the paramedics. A bad fog leads to a multi-car accident on the San Diego Freeway. A young crash victim has a heart murmur. The paramedics have difficulty responding to an attempted suicide. At a structure fire, Johnny is injured and Roy must rescue both him and a security guard.

Johnny and Roy receive an award, but they cannot remember which specific incident earned it. A ninety-four year old man breaks his ankle dancing. A man passes out in the dentist's chair - is it his heart, or something else? Paramedics rescue a stranded mountaineer.

Captain Stanley is dismayed when he learns one of his former commanding captains is now his Battalion Chief, causing the others to worry about his increased paranoia. Two men's carelessness starts a fire at a gas station. A new hospital administrator causes problems. A woman accidentally shoots her husband with a nail gun. Two clowns start a fight at an ice rink. A car leaves an overpass and crashes into a transfer truck filled with pesticides.

The firemen plan to celebrate the imminent retirement of a martinet captain with a party, under the guise of throwing a farewell dinner. A model in a bear suit suffers from heat stroke during a promotion stunt. A bizarre family believes their sleeping mother is dead. The firemen rescue CHP officers from a helicopter.

Roy has an argument with his wife and Johnny tries to help. The firemen rescue a man from precarious auto wreck. A brilliant doctor's erratic behavior causes concern at the hospital. Doctors diagnose a woman's heart condition. Paramedics rescue a dog from a roof and two children lost in a rapidly flooding storm drain.

John and Roy worry about their recertification exams. A fireman's widow keeps calling the station for assistance in minor matters. A TV sports fan experiences shortness of breath. The daughter of the fireman's widow suffers a serious fall. An accident on a movie set turns deadly.

The computer fouls up and Gage gets a check for thousands instead of for hundreds. A transient is injured in a car at a junkyard. A victim's dog causes problems. Two workers are trapped on a scaffold.

A paramedic from England has a stint with Station 51 observing Roy and John whose rescues include a structure fire, a wild-west performer, a car accident and a man trapped in heavy machinery. The visitor saves John's life. At the hospital Dr Brackett treats a rock singer in a diabetic coma and Dr. Early has problems with a defiant nurse.

A stray cat decides to have her kittens on Johns bed at the station. A family is trapped in a down airplane. An old man gets his foot caught in a bear trap. A stage actress suffers an anxiety attack. A school develops a gas leak. Roy and John rescue the victim of a boating accident.

A gas explosion results from a white lie, prompting Johnny to go on an honesty kick. At the hospital, doctors work to save a boy who is inexplicably choking to death. In the field, the paramedics rescue a teenage boy injured in a dive off a roof, and a baby and his blind grandfather trapped in a burning house.

Roy and John are trapped at Station 86 when a rain storm washes out the bridge, and they become the only medical treatment in the area. They assist two victims of an auto accident and a child with bronchitis. Doctors at the hospital treat a policeman hit by lightning. With the aid of a female psychiatrist, the paramedics treat an elderly woman with a hip injury and a man with heart trouble. Copter 15 transports the victims to the hospital, where a power failure complicates matters. Dr. Morton accompanies the paramedics back to Station 86, where they respond to an auto accident with multiple injuries.

A driver crashes into a pole, injuring two workers. John and Roy are asked to be on a paramedic advisory committee, but they have to put up with everyone's favorite paramedic - Brice. The firemen rescue a stunt climber from the side of a building.

After paramedics rescue Grant and Robin Elder, they attach themselves to the station to help out, but soon wear out their welcome. A car goes right through a restaurant window, and in a scene straight out of A Christmas Story a BB injures a child's eye. While returning from a false alarm, Johnny and Roy rescue people endangered by a boat fire.

John and Roy think about going into the floor cleaning business on the side. A hermit is trapped in his cave home. Dr. Morton treats a famous singer. John is injured on a high rescue, and the station battles a chemical warehouse fire.

A woman passed out in a bar is suffering from more than drunkenness. Johnny becomes the victim of a hit and run accident and is a terrible patient. Worse, his replacement Brice annoys everyone at the station. The paramedics help a heart patient and fight a fire in an abandoned building where Roy, Brice, and Marko are trapped.