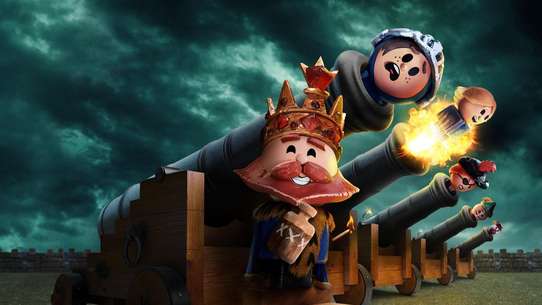 The BEST episodes of Crossing Swords

After months of the kingdom depleting the jewel mines underground, the Mole People finally lash out at the surface-dwellers who have ruined their home. With the royal family in danger, Patrick must journey down into the darkness, where he encounters terror both real and existential; does he even want to be a knight anymore? When Patrick is double-crossed by allies, his world truly comes crashing down around him, and his life will never be the same.

As punishment for his refusal to turn in King Merriman, Patrick finds himself sentenced to fight in the arena as a gladiator. Merriman starts to take a shine to his new life in the human resources department of a cobbler shop. But when he learns of Patrick’s fate, Merriman puts corporate life aside and attempts to reclaim his throne.

The circus returns to the kingdom, much to the king’s delight. Blarney is reunited with his uppity clown college classmates. Patrick, however, is concerned that Danielle’s circus origins make this an opportune time for her to strike again.

On an island training retreat, Patrick and the squires meet the most famous knight in the kingdom, but Patrick quickly decides the knight’s lessons are superficial crap. Elsewhere on the island, Merriman and Tulip attend couples counseling that quickly turns into a struggle for their very lives.

When Queen Tulip slips into a sex-toy-induced coma, King Merriman throws a beauty pageant to replace her. Patrick feels guilty because he recruited the sex toy’s inventor. While every eligible lady in town tries to win the king’s hand, Patrick desperately attempts to wake the queen before the kingdom is torn apart.

Merriman and Tulip are back on the throne, just in time for the annual Hallowtide party. Patrick is tasked with chaperoning Princess Blossom, but his desire to hang out with the knights at the party leads him to abandon his duties. Meanwhile, Blossom plays a “Bloody Mary” game in a mirror, and swaps places with her deceased Aunt Donna, who runs amok at the party. Now Patrick must help Blossom escape the mirror by midnight, or she’ll be trapped there forever!

Patrick returns to the castle with the rescued Princess Blossom only to find it under siege. The minotaur maze was only part of the assassin’s devious plan, and Patrick comes face-to-face with the force that has been terrorizing the kingdom all season: the devious assassin. With the royals imprisoned, Patrick must rely on his family and friends to help him defeat the assassin and save the realm from those conspiring to overthrow the monarchy.

The assassin has orchestrated the kidnapping of Princess Blossom, and a Minotaur holds her captive in its maze. Now the King and Queen must abdicate the throne, or their daughter will be eaten by a monster. Patrick and a host of fellow adventurers— including his own siblings—must brave the labyrinth and its traps in order to slay the Minotaur and retrieve the Princess.

The kingdom adjusts to life under its new (old) king, the Old King, who is back on the throne thanks to Danielle’s machinations. Patrick is torn between loyalty to the kingdom and loyalty to his former king, Merriman. Meanwhile, Merriman tries life as a civilian and quickly finds a new career after a mushroom-fueled drug trip.

Patrick’s excitement to start his new squire job is quickly dampened when he is placed in charge of deciding who to execute as part of King Merriman’s publicity stunt. While Patrick struggles between pleasing the King and staying true to his anti-death penalty morals, Coral and Ruben campaign for the high profile role of executee…They don’t want to be executed, but it’s an honor to be recognized.

A drug epidemic at Blossom’s all-girls academy threatens to derail the king and queen’s scheme to draw attention to their newfound wealth. Patrick and Broth go undercover as female students to protect Blossom and bust the drug ring, but they find that the truth behind this mystery is even more shocking than they suspected.

The wedding of the year brings Merriman a chance to mend fences with King Rami IV, whose son is arranged to marry Holden the squire. But when Ruben crashes the wedding in order to win Holden back, Patrick uncovers a malevolent undercurrent to the nuptials.

Patrick finds himself on trial for betraying the kingdom, and only avoids punishment with a Hail Mary promise to the king: that he will find the legendary leprechaun gold. Patrick is thrilled when he enlists a real, honest-to-god knight to help him in his quest, until he realizes Sir Kutter is a wild card who plays by his own rules.

Fed up with a string of bad investments that have led the kingdom to bankruptcy, King Merriman throws out a pot of “magic beans,” which quickly grow into a giant beanstalk. Seeing an escape from his responsibilities, Merriman climbs the beanstalk with Patrick pursuing him. They find a beautiful kingdom in the clouds, a society of peace, sharing and kindness—a perfect new realm for Merriman to dominate and ruin. Patrick has to return the King to the surface before he destroys the cloud kingdom— and before the beanstalk is chopped down and they’re stranded forever.

As the only uncut squire, Patrick is horrified to learn that he will need to undergo a circumcision to keep his job. Meanwhile, as Blossom celebrates the arrival of her first period, she learns that she will soon be forced into a chastity belt, taking away her opportunity to lose her virginity to her beloved boyfriend Keefer. She enlists Patrick to help make her Super Sweet Period Party everything she wants it to be. Together, the pair suffers the pains and obligations of growing up.

When Patrick scores highly coveted tickets to a Kraken watching cruise for his parents, he sees an opportunity to impress his hard-to-please father. The gift blows up in his face when the cruise is hijacked by a radical protest group and his parents are taken hostage. Now Patrick must stop the hijacking at any cost, even if it means making a deal with the devil.

As a string of high-profile assassinations rock the kingdom, the headstrong and petulant Princess Blossom returns home from school to attend a giant music festival. Patrick is stuck as her one-man security detail. Guarding the mischievous teenager gets even more difficult when the assassin strikes the festival, and Patrick realizes he’s truly in over his head.

When a crisis sweeps through the Kingdom, Patrick accompanies the royal family north to stay safe, isolated in an icy ski lodge. While the family makes it to the lodge, Patrick finds himself trapped in an ice castle with a Yeti, who happens to be an agoraphobic hoarder. Patrick tries to help the Yeti overcome her issues as, back at the lodge, King Merriman finds a surprising challenger for his title of Alpha Male…Patrick’s father, Glenn.

Young Patrick dreams of earning his knighthood and dispensing justice to evildoers. He’s driven by his goodhearted, earnest nature, but also by guilt: his own siblings are some of the land’s most notorious crooks. However, when Patrick finally lands a coveted squire position at the royal castle, his dream job quickly turns into a nightmare. In this kingdom, corruption starts at the top, and staying true to his lofty goals will be a thornier proposition than Patrick anticipated.

Patrick is thrilled to escort King Merriman to a charity golf retreat, only to arrive and find out it’s actually the Chill Society, an annual bacchanal where rival kings meet to divvy up power and party their faces off. Patrick is shocked at his look behind the curtain, especially when he’s exposed to both a dark royal secret and a Chill Society custom that threatens to kill one of his own family members.