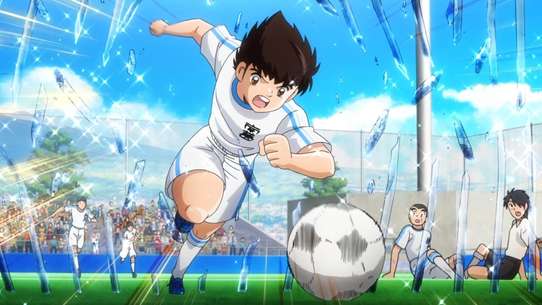 The BEST episodes of Captain Tsubasa (2018)

Captain Tsubasa is the passionate story of an elementary school student whose thoughts and dreams revolve almost entirely around the love of soccer. 11-year-old Tsubasa Oozora started playing football at a very young age, and while it was mostly just a recreational sport for his friends, for him, it developed into something of an obsession. In order to pursue his dream to the best of his elementary school abilities, Tsubasa moves with his mother to Nankatsu city, which is well-known for its excellent elementary school soccer teams. But although he was easily the best in his old town, Nankatsu has a lot more competition, and he will need all of his skill and talent in order to stand out from this new crowd.

#3 - Confrontation of Destiny Once More

#8 - The Birth of the Golden Nankatsu duo

Shutetsu finally opened the scoring against Nankatsu. Tsubasa and his teammates do not give up and do everything to return to the score. Unfortunately for them, Wakabayashi will put in place a tactic that could nullify their hopes of equalization ...

The football match between Nankatsu and Shutetsu is decisive, as it will designate the winning school of the 26th inter-clubs. Surprisingly, Tsubasa evolved into the central defender position during this match and annihilated all the opposing attempts. But will this tactic pay off in the long run?

The national tournament begins with a dream poster: Nankatsu vs. Meiwa! Spectators came in droves to attend this match which will have for main attraction the duel between Tsubasa and Hyuga ...

Faced with the technical and tactical superiority of Misugi, Tsubasa loses courage and is unable to react. The match is very badly embarked for his team, led by two goals. That's when Wakabayashi, who came to Tokyo expressly in the hope of playing the final, intervenes. Will his speech succeed in motivating the captain of Nankatsu?

After leaving Shimada, the Nankatsu SC is in the final departmental against Shimizu FC. With the return of Wakabayashi in goal, the team has every chance of winning the ticket for the national tournament, but it is not counting on an opponent who will target their best player ...

#18 - Tough match between Meiwa and Furano!

The match between Nankatsu and Meiwa keeps its promises, as does the duel between Tsubasa and Hyuga. Despite the intense heat, both teams remain elbow-to-elbow. Who from Tsubasa or Hyuga will manage to tip definitely the balance in favor of his team?

#24 - On The Way To The Inter-School Tournament

Tsubasa, Misaki and Ishizaki are training to be among the fifteen players who will be competing for the national tournament. In a conversation, Misaki refers to Kojiro Hyuga, a player apparently as talented as Tsubasa, but radically different in style. Tsubasa will soon get to know this young boy with a strong character ...