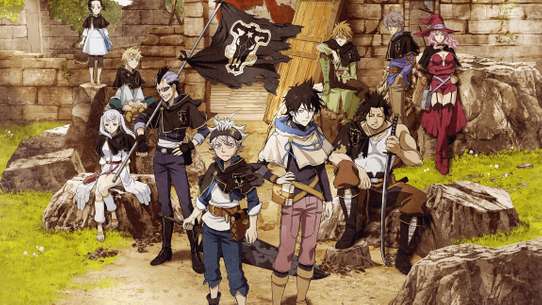 The WORST episodes of Black Clover

Asta and Yuno were abandoned together as babies in baskets in the same church the same day, and since then they have been inseparable. When they were children, they promised that they would compete with each other to see who would become the next Wizard King. However, as they grew, some differences between them became clear: Yuno was a magical prodigy, while Asta could not use magic at all. In a country where magic is everything and athletic ability is nothing, Asta tried every day to provoke even the simplest magic of himself with physical training and strong proclamations of his will

As Asta and Zora battle Langris. Charmy wanders into the forest, seeking exotic ingredients to cook something tasty for Yuno and the Wizard King. After sampling a toxic mushroom she passes out and she and her sheep chefs begin to experience vivid hallucinations in the form of short 30 second sketches that feature members of the Black Bulls and other Black Clover characters in their Chibi forms. Charmy eventually awakens and, realising she has been dreaming the whole time, resumes her search for exotic ingredients. Back on the battlefield Zora prepares to punish Langris for failing to uphold the ideals of an honourable magic knight.

Months have passed since Asta and Yuno became Magic Knights and took their first steps toward becoming the Wizard King. Father and Sister Lily couldn’t be happier about all of their hard work.

#3 - The Secret of the Eye of the Midnight Sun

Asta and the others safely return to the Black Bulls' base after defeating the Eye of the Midnight Sun and the Diamond Kingdom in the Witches' Forest. Now that Asta's arms have healed, the Black Bulls as well as Yuno, Klaus, and Mimosa are relieved. However, there's no telling when the Eye of the Midnight Sun or the Diamond Kingdom will try to attack the Clover Kingdom again. Klaus then brings up a proposal to Yuno and Mimosa.

After using forbidden magic in the fight against the devil, Secré turns into a bird and ends up spending centuries all alone. During that time, she ends up meeting Asta, who ends up with Licht’s grimoire that has a different devil residing in it. Patry ends up reviving due to resurrection magic, and then he becomes the leader of the Eye of the Midnight Sun and vows to get revenge. This was all according to the devil’s plan and Secré uses her sealing magic to free Lumiere and Licht so they can finish off the devil once and for all along with Asta. The battle comes to an end, and Secré now begins her new life as a member of the Black Bulls.

Because she used forbidden magic, Nero survived for centuries. In the back of her mind, memories from long ago start to replay in her head. From when Nero was still called Secré and when Secré first met the most powerful and talented mage in the Clover Kingdom, Prince Lumiere. They become friends with Licht and the other elves, but due to the evil plans of a devil, the humans end up killing all of Licht’s comrades. Because of that, Licht ends up turning into a demon and Lumiere finds him in that state. What will he have to do to protect the ones he loves?

#6 - Those Who Have Been Gathered

Asta and Noelle return to the Black Bulls’ hideout only to get taken away by Mereoleona again. The place they were brought this time was the Vermillion estate. Waiting for them there was Captain Fuegoleon, Kirsch, Mimosa, and the sister who looked after the children at the church in Nean, Sister Theresa, who was also known as the former Magic Knight, the Crimson She-Leopard. Asta and Noelle wait in anticipation, wondering if they are going to get a new mission, but what Fuegoleon actually tells them is...

Asta and the other Black Bulls continue their training in order to face off with the devil. Charmy is trying to use her cotton magic and her Sheep Cooks to create food to enhance her friends’ mana, but she realizes she lacks training. She then decides to seek out someone who can help her. Meanwhile, Gordon is also unhappy with his inability to help his friends, so he decides to go off to train on his own.

To prepare for the upcoming battle against the devil, Grey decides that she needs to get over her shyness and be able to face her friends first before anything else. Meanwhile, Captain Charlotte trains with her squad.

Asta and Noelle go to see the Magic Knight Entrance Exams with Yami. The testing site and the anti-birds that gather there are rather nostalgic (?) to Asta and remembers his own experience at the exams last year after seeing the hopefuls from this year.

The Star Festival, the biggest festival of the year in the Clover Kingdom was about to take place. Every year the festival, the number of stars each Magic Knight squad had acquired would be announced. Captain Yami and the other Black Bulls prepare to go all out for this festival. Noelle tries to use this chance to enjoy the festival with Asta, but Asta ends up inviting some guests to the festival. The guests happened to be Kahono and Kiato...

Noelle and the other Black Bulls head to Racquey to do some training, when Noelle hears a mysterious voice. Shortly after, the Black Bulls are reunited with Kahono and Kiato. The siblings ask them for help and they head down to the Underwater Temple. There, Gifso explains that a creature called the guardian has gone berserk, so in order to quell its rage, Kahono and Kiato need to present it with their song and dance. Gifso asks the Black Bulls to act as their bodyguards and Yami appoints Noelle and Finral for the job.

The Golden Dawn was hard at work trying to get the kingdom back onto its feet. They were trying to make amends for the trouble they had caused while they were possessed. Captain Vangeance puts Alecdora Sandler in charge of a mission. Alecdora can’t hide his dislike for Yuno so he tries his best to earn more merit than him.

The Black Bulls return to where their base originally was. Henry has to return the Raging Bull back into their hideout, but apparently, that takes some time. Meanwhile, Yami tells the Black Bulls to go find the magical beasts that escaped from the hideout. They had run away when Rades and the others had attacked the hideout and had been wandering around the forest ever since. There was even a chance that they had returned to their feral states. Their fear comes true, as one Black Bull is attacked after another.

Vanessa Enoteca returns to the Witches' Forest and requests that the Witch Queen teach her ancient magic. In exchange, the Queen tasks Vanessa with training two witches, Samantha Kravitz and Elvira Aguirre, and resolving an issue with the forest's defenses in case of an attack from the Spade Kingdom.

Julius asks Marx to do a favor for him. He wanted him to help with creating new magic items as well as take care of some bandits. Marx is accompanied by the former member of the Eye of the Midnight Sun, Sally, to the Black Bulls’ hideout in order to conduct experiments for magic item research. Next, he travels with Captain Fuegoleon and Captain Nozel to investigate the bandits. Apparently, Julius had visited even that faraway town in disguise before...

Though their betrothal was decided between their families, Finral tries to become a better man for Finnes’ sake. However, his impulse to instantly hit on any girl he happens to see doesn’t seem to get better, so he asks Asta to help him train... But they end up going to a mixer. Meanwhile, the members of the Blue Rose Knights want to help Charlotte out with her chances at love and invite Yami to a mixer-like setting at the same pub. What will result from both of these mixers?

The incident with the Devil Believers had come to a close. This whole incident ends up hurting Nero, who witnessed the pain the Devil Believers felt from having less mana and reminds her of her time with the first Wizard King, Lumiere and the magic item he was trying to create to get rid of discrimination in their kingdom. She then gets summoned by Julius. Meanwhile, Asta and the others receive a message saying that the Heart Kingdom and the Spirit Guardians were ready to train them for their fight against the devil.

Zora returns to his hometown to visit his father's grave and there he finds a young commoner training and admiring the one who was the first commoner Magic Knight.

Asta is working hard to become more powerful by training with the Spirit Guardians. His anti-magic is one of the magic attributes that falls into the "Arcane Stage" and will be needed to defeat the devil.

Asta and Yuno get back to their village after an elf had attacked it. They were heading to the royal capital along with Captain Nozel and Noelle, but they saw that their village was in trouble and were given permission to make a detour. In order to protect the villagers, Asta and Yuno face off with the elf. The father that had raised them was able to see how much Asta and Yuno had grown, but...

The Black Bulls get a day off after getting paid, and Gauche goes to visit his beloved little sister Marie. To his surprise, he finds Asta already there and playing with her.

The Magic Knight Squad Captains gather for a meeting and for an award ceremony with the king later. At the meeting, they decide that Asta, Nero, Noelle, Luck, Finral, Mimosa, Leopold, Charlotte and Rill will be going to the Heart Kingdom to train with the Spirit Guardians. At the award ceremony, Yuno advances very quickly in rank, and...

Asta, Gauche, and Theresa go to find the abducted children. Gauche is able to track the faint trace of mana from the magic mirror that Marie always carries with her. On their way there, Asta spots Marco in the snow and goes to him.

While the Clover Kingdom was trying to get back onto its feet, the citizens learn that the one behind the destruction of their homes is called the devil, and many of them grew to hate the devil. Some of these people had gathered and created a group called the Devil Banishers. Because the Magic Parliament did not immediately punish the supposed servants of the devil, they decide to go after Asta and Nero and take matters into their own hands.