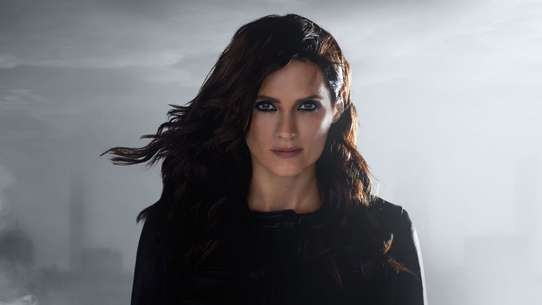 The BEST episodes of Absentia

Every episode of Absentia ever, ranked from best to worst by thousands of votes from fans of the show. The best episodes of Absentia!

While hunting one of Boston's most notorious serial killers, an FBI agent disappears without a trace and is declared dead. Six years later, she is found in a cabin in the woods, barely alive and with no memory of the years she was missing. Returning home to learn her husband has remarried and her son is being raised by another woman, she soon finds herself implicated in a new series of murders.

Emily hits a dead end. Despite this, she follows the remaining shreds of evidence to a wrenching revelation!

Emily learns that Rex was working for someone connected to both her past and her present. Later, Emily is forced to resort to desperate measures.

Tommy makes a new discovery that puts a new light on the investigation. Emily's past faces the present when she finally meets her captor, and will be like the mouse and the cat. When Nick gets hurt, Emily has to face several situations to save the ones she wants.

Nick works to free the refugees. Cal finally confronts Armstrong. When Gunnarsen and Crown go to arrest Deputy Director Webb, they discover something deadly. Emily tries to get to the bottom of Elliot’s operation and goes to extreme lengths to protect her family.

Disoriented and drugged into a paralytic state, Nick wakes up in a dark and confined location. Without a body as proof, Emily refuses to accept that Nick is dead and makes a deal to get him back, only to find that Dawkins has laid a trap and everyone is in danger.

The evidence against Emily is too much for the FBI and Boston Police Department to ignore, so they ask her to turn herself in. In the midst of chaos, old feelings come to the surface between Nick and Emily. Emily decides she would rather flee and try to solve the mystery that is ruining her life. Can Emily save her relationship with Flynn? Is it possible for agent Adam Radford to solve this mystery? Can Nick trust Emily anymore?

Alice and Flynn are abducted by a mysterious person. Nick suspects that Emily was the one who kidnapped his family and desperately tries to find them. A reporter assaults Jack every time she wants to get exclusive information. Emily tries to get answers from Charles, but has to flee when Nick tries to arrest her. How will the couple act when they meet again?

Emily avoids arrest and finds another trace of the investigation. But with the disturbing new evidence, Emily begins to suspect one of her loved ones. Unfortunately, he is the only person who can help Emily figure out the case. Could it be just a little paranoia from Emily, or does she not have anyone to turn to?

Emily and Nick devise a plan to infiltrate the refugee camp. Cal poses as a Meridian guard in hopes of finding Armstrong and bringing him to justice. Crown and Gunnarsen narrow in on Meridian’s mole. An unexpected visitor arrives at the farm.

Emily and Nick are finally reunited with Flynn back in Boston, but the threat of Elliot’s bioweapon still looms large. Emily resorts to drastic measures and make a dangerous choice to ensure her family’s safety.

Nick continues to be tortured but finds an opportunity to try to escape from his captors. Cal and Emily head off to rescue Nick and become closer along the way. When they reach the mysterious location, they find evidence that links to Nick’s case back in Boston, but there’s no sign of Nick.

When Detective Gibbs and Nick find an FBI agent who appears to have been murdered by Emily, the hunt for her goes up to a new level. With the help of a clue given to her by Adam Radford, Emily tries to tie all the threads while evading arrest. Nick tries to reconcile with Alice's betrayal. Can Emily save herself? Can Nick keep his family together?

Emily is able to retrieve more information from Charles and hopes that this will be a breakthrough in her research. Will this lead to Flynn? Will she discover the identity of who is after her? Will Tommy and Nick catch Emily and end the case that consumed the former agent’s life?

Emily and Cal venture off the grid as they track Rex Wolfe deep into lawless territory. Back in the States, Nick struggles to swallow a massive lie.

Emily is forced to deal with another devastating loss. However, her grief soon transforms into drive when she realises Rex Wolfe was only the tip of the iceberg.

When the testifying witness against Emily is murdered, all signs suggest that the murder was committed by Emily. While Tommy Gibbs and the Boston Police Chief are accusing Emily, she and Nick look for an FBI agent who forced the witness to lie. For Emily, there is suspicion that this agent is the one responsible for her abduction.

Emily makes a final attempt to trade the stolen files for Nick and demands proof that he is alive, unaware that Nick has escaped from his captors in a thrilling chase. Nick makes contact with the FBI. Emily makes a bold decision to confront Cal about his past.

Emily is serving out the final days of her FBI suspension while struggling to come to terms with the consequences of her actions from the last two seasons. Hyper-vigilant and distrusting of others, Emily sees threats everywhere and takes a closer look at everyone.

Emily’s alleged serial killer, Conrad Harlow, is being released from jail, and Emily has not come close to solving the mystery of her kidnapping and time in captivity. As Emily struggles to return to normal life, a witness turns up and reinforces the suspicions of Emily. Emily denies the suspicions and is sure the witness is lying and was forced into making a false statement, maybe by someone in the FBI. Will Emily and Nick be able to find out the truth before Emily is again torn from her family?

Following the deadly events, Emily must race against time to find and save Nick, with the help of his mysterious informant. Upon tracking his location, Emily realizes there is a more complex conspiracy afoot and is left to grapple with the possibility that Nick has been killed.

While investigating the home of the most recent Fentanyl Killer victim, Emily obtains a critical piece of evidence. Meanwhile, Nick's work with a high-profile prisoner turns deadly.

After years of assuming FBI Agent Emily Byrne was a possible victim of serial killer Conrad Harlow, she is miraculously returned to her family. Emily, however, has to struggle with the mysteries of her captivity and the fact that everyone has moved on without her. Investigating Emily’s disappearance, her husband Nick Durand detects a connection between Emily and a sex trafficker Robert Semerov, who has negative feelings about Emily. When the FBI traces the sex trafficker, suspicion suddenly moves to Emily. Is she still the same person they knew?

Emily complies with Dawkins requests in order to be taken to Nick, and orchestrates a clever ruse along the way. As Nick’s guilt and paranoia threaten to overwhelm him, he finally puts a rest to the personal demons that have haunted him.

Jack helps save Emily’s life and finds a startling connection with Emily’s childhood. Emily discovers secrets from the past that relate to a childhood friend, Charles. Meanwhile, Tommy arrests Jack for helping Emily. Alice confronts Nick, which puts both her and Flynn in danger.

Emily’s demand for the FBI to go after Nick is met with resistance, which leads her to set in motion a risky plan that puts her face-to-face with the one man who can lead her to Nick. Nick is being drugged and psychologically tortured, revealing his buried guilt and his insecurities as an FBI agent, a husband and as a father.