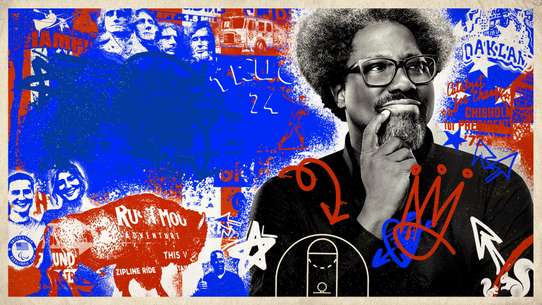 The WORST episodes of United Shades of America

Follow comedian and political gadfly W. Kamau Bell as he explores the far corners of our country and its various groups and subcultures.

#1 - The Time for Reparations

W. Kamau Bell heads to New Orleans to explore the topic of reparations.

W. Kamau Bell heads to South Florida, home of the largest number of Venezuelans in the United States, to understand the crisis that led them to seek asylum.

#3 - Athletes and the Cost of Winning

While sports can be exhilarating and bring us together, they also come with a lot of intensity and pressure that can compromise athletes’ mental health. W. Kamau Bell heads to the legendary sports town of Boston, Massachusetts to find out how athletes are speaking up and leading change.

When we picture Appalachians, we generally picture the white working class of America. But a significant and largely unknown population of Black Americans have called it home since the time of the conquistadors, and they have contributed to American culture in ways that are often overlooked.

Kamau goes back to Portland to explore the dynamics of the protests.

A look into the public education system of two contrasting school districts in Cleveland, Ohio.

Kamau visits Dallas—the home of the Megachurch, to find out what is creating the new face of Christianity today, in a city where church and state are far from separate.

How we can fix America's broken food supply chain? A nightmare scenario for farmers is happening right now. 'Essential' farmworkers feel underpaid and at risk.

W. Kamau Bell is off to speak to the people of Portland, Oregon where the result of a massive influx of hipsters appears to be gentrification; he inquires as to how this has affected the local neighborhoods.

W. Kamau Bell meets Muslims in Michigan who are eager to explain that practitioners of Islam aren't what people assume they are.

Across the United States, the fastest-growing category of new jobs is gig work, spurred on by tech companies and their never-ending stream of apps; low and uncertain incomes have replaced benefits.

The Appalachian region has a rich history and optimism, despite being one of the hardest-hit countries economically; W. Kamau Bell plans to mine.

Kamau Bell searches for the fountain of youth. He heads to Daytona Beach, Florida and gets schooled on 'beachin.'

Kamau discovers American disparity through the lenses of generational wealth.

W. Kamau Bell takes a trip up north to Canada to see if everything is truly as great as everyone says.

Camden, New Jersey has a reputation as one of the country's most dangerous cities; W. Kamau Bell heads there to see if a newly implemented community policing program is helping the relationship between citizens and the police force.

W. Kamau Bell unlocks some of the myths of Puerto Ricans; a journey from New York City to Puerto Rico itself.

W. Kamau Bell heads to the U.S. Mexico border to find out what life is like for the people who live there.

Kamau spends time speaking with military veterans in San Diego to examine how the military is beset by the same destructive forces that keep the U.S. divided as a nation.

Despite their dwindling numbers over the decades, the notorious white supremacist group, the Klu Klux Klan, seek to reignite the flames of white power with a new message; W. Kamau Bell heads to the South to speak to KKK members.

W. Kamau Bell goes to the heart of Chicago gang territory to explore the truth about violence in the city.

W. Kamau Bell speaks to prisoners of the infamous San Quentin prison to hear their individual, real stories about life inside the prison and what it has turned them into.

Kamau goes to Philadelphia to explore the shifting ethnic makeup of the U.S. in a celebratory exploration of an increasingly robust mixed-race population and the ways in which they are changing and challenging the culture.