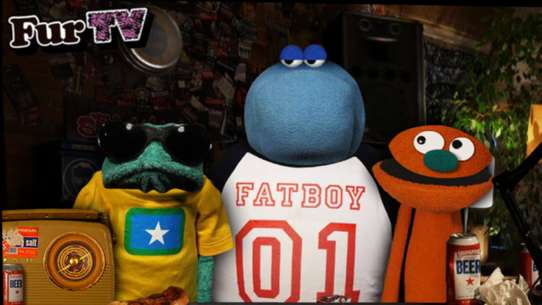 The BEST episodes of Fur TV

Every episode of Fur TV ever, ranked from best to worst by thousands of votes from fans of the show. The best episodes of Fur TV!

Fur TV is a British sitcom about the residents of Furry Avenue, where people and puppets live side-by-side. The main characters are three puppet housemates - Lapeno, a diminutive but sauve ladies' man; the quiet, lazy, but loyal "Fat Ed", Eddie; and Mervin, a naive loser who's always having to be… More rescued by his friends. Fur TV won the BBC Greenlight Award for new comedy in 2003. The pilot aired on BBC2 in 2004, however MTV picked the show up and the brand new series premiered in 2008

There's a cage rage at Furry Towers as the puppets take on a fighter called "The Killer".

Lapeño Enriquez, Edward 'Fat Ed' Tubbs & Mervin J. Minky come across a missing cat which belongs to the lead singer of the girl band Legs etc. however the cat ends up in a worse state when Kiki and her bandmates come round to get the treasured cat back.

When Mervin is whacked on the side of the head, he is transported to a "Puppetz 'n' the Hood" style fantasy land in the series finale of 'Fur TV'.

Lapeno struggles to keep to his strict limit of five women a day and is put into a sex clinic.

Mervin's Millions: When there's a mix up with the mail, Mervin inherits a massive estate that belongs to a late rapper. Fur & Loathing: Lapeño gets a visit from an old friend and his girlfriend. The friend doesn't know that she and Lapeño slept together many times.

The puppets meet Apples whilst they set their sights on being top DJs.

#9 - My Big Fat Gay Wedding/There's Something About Mervin

My Big Fat Gay Wedding: Ed has to be forced into marrying Mervin, or he will be deported. The problem is that Mervin gets too carried away. Plus, the social worker who has to check the marriege isn't fake, has a crush on Ed. There's Something About Mervin: Lapeño tries to date a woman who protests against labs for experimenting with animals. After Ed gets tired of Mervin, he sends him to those labs to experiment with him. Eventually, he gets cloned.