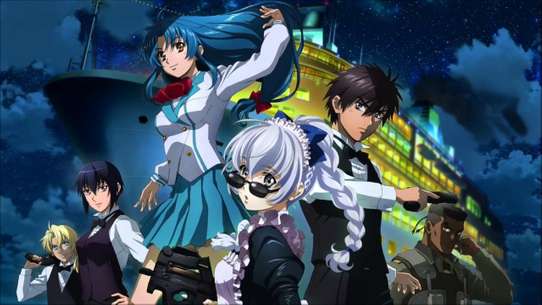 Sousuke who are attacked by amalgam. Raids also come closer to Sousuke who cannot heal wounds yet. On the other hand, Tessa who missed Fowler slightly afterward pledges Leonard and amalgam.

Sousuke makes his way to the city of Namsac, where people bet on fighting matches between decommissioned Arm Slaves. Thanks to a bit of serendipity, he meets a team owner named Nami at the arena just when she's looking for an AS operator.

While enjoying considerable success fighting in the arena for Nami's team, Sousuke starts to grow accustomed to his new life in Namsac. But little things keep reminding him he came to this city with a specific purpose in mind.

Amalgam decides it's time to get serious about its Mithril problem, and this means big challenges are on the horizon for Sousuke, Kaname, and Tessa. As enemies close in on all fronts, will they find ways to overcome those challenges?

Lemon determines where Kaname is likely being held captive, so Sousuke and his ragtag group launch a rescue mission. But many forces are on the move this stormy night, and the mission doesn't quite go according to plan.

When Tessa is found wandering dazed and barefoot on a California highway, her attending psychiatrist just might be in for the case of a lifetime. The story Tessa tells sounds like an intricate delusion, but sometimes truth is stranger than fiction.

Sousuke and Kaname work together to save Kyoko and everyone else at Jindai High, and they both reach a point where they must make difficult, fateful decisions. Tessa likewise tries to save as many of her people as possible as she abandons the island base.

The SRT team has its hands more than full trying to protect Merida Island from three rampaging Behemoths. Sousuke and Kaname attempt to deal with their own frantic situation, as Amalgam's Kurama drags the students of Jindai High School into the fray.

As part of the organization Mithril, Sergeant Souske Sagara, Melissa Mao and Kurz Weber recieve a secret mission: guarding Kaname Chidori, a popular student from a school higher in Tokyo which has a hidden military potential.

The Crossbow team takes part in their first illegal battle, but nefarious forces are at work behind the scenes. If Sousuke doesn't play his cards right, this first battle could end up being his last.

In Tokyo, Sousuke and Kaname flee from enemy agents in a desperate attempt to rendezvous with their allies. On Merida Island, Mithril struggles to respond to a fierce and demoralizing assault by Amalgam forces.

Sousuke's grudge against Kurama escalates into a full-blown shooting war on the streets of Namsac, but is it possible for him to fight this war all by himself? And every war has its share of casualties.

Leonard and Kalinin make every effort to spirit Kaname away before Sousuke can reach her. As battle erupts between rival Amalgam factions and Mithril remnants, Sousuke and Kaname both find they have to fight against fate to hold on to hope.

Sousuke is set on his mission to protect Kaname, and attacks anything vaguely resembling a threat to Kaname. This leads to funny situations and Sousuke has to explain Kaname why he is following her, blaming coincidence.

The Danaan is in the shop, and Captain Testarossa is feeling pretty bummed about it. To lighten the mood, Mao drops by Tessa’s office, but by the time Tessa arrives, the place is littered with empty beer cans and cigarette butts. Needless to say, Tessa isn’t pleased. The situation quickly spirals and Tessa ends up challenging Melissa to an AS duel, with the stipulation the loser has to run around the base naked. Kurz is obviously pleased by the news and clears his schedule to witness that spectacular event. Tessa, being all talk about her “fearsome AS piloting skills”, recruits Sousuke to train her how to operate an AS. Sousuke’s definitely going to have his hands full in more ways than one.

#16 - A Fancy Without Honor or Humanity

Sousuke and Kaname discover that Ren Mikihara is a yakuza daughter whose members ask for their help to deal with a rival gang. Sousuke, in his mascot disguise, trains the yakuza members. When the rival gang kidnaps Ren and Kaname, Sousuke and his recruits rescue them wearing special mascot AS's.

The Mithril assault team finally begins to take Sousuke's advice into account, but it may be too late: Gauron has one of Sousuke's old comrades predicting what Sousuke will do.

Gauron manages to escape thanks to the betrayal of two soldiers. Gauron takes Kaname hostage and takes over Dana, the AI of the De Danaan.

Sousuke spends most of the budget for the school festival. Kaname gets so disappointed. It might have been his apology? He invites her to "go to a southern island", but the destination is not what she is thinking...

Putting the tumultuous experiences in Khanka behind them, it’s business as usual back at Jindai High School. On the way to school, Kaname is asked out by Shirai, even offering to leave his girlfriend, who watches the debacle furiously from cover. After Sousuke threatens to kill off his family if he goes near Kaname again, the situation appears to be resolved-or is it? At school, Kaname gets the strange feeling that she’s being watched. The situation explodes when Sousuke finds foul graffiti written about Kaname scribbled on the men’s room wall, and proceeds to torture and interrogate Shirai trying to get him to confess. Kaname is called in by Kyouko to defuse the crisis before Shinji’s bladder bursts. Once Shirai is rescued from getting intimate with the toilet bowl by his enraged girlfriend Mizuki, Sousuke sets out to learn about love from one of Shinji’s dating simulators. Kaname and Kyouko watch with distain as negotiations break down between Sousuke and his virtual love. While Sousuke hasn’t got a clue about romancing virtual girls, this military maniac is about to find himself on the receiving end of a crash course in the real thing courtesy of Mizuki Inaba. Blaming Kaname for Shirai breaking up with her, Mizuki recruits Sousuke to fill the roll as her beloved boyfriend in the hopes of convincing some old friends from Jr. High that she has the perfect relationship. Will Sousuke survive basic training in the art of romance? And just how much of this insanity is Kaname going to stand for?

Kaname’s finally getting her summer fun, but she doesn’t seem too thrilled about it. A few days prior, Mithril Intelligence obtained information that an arch nemesis Sousuke knows very well is alive and wandering the barren wastelands of Helmajistan. While Captain Testarossa is against the idea, Intelligence deploys Sousuke, along with a Mithril unit based in the Indian Ocean, to Helmajistan to assassinate this dangerous target. On the flight over, Sousuke gets heckled by some of his “comrades”, making it a very unpleasant flight for our young Sergeant. Eventually, the team arrives in theater and parachutes in country.

Trouble brews on the Tuatha de Danaan. Gauron has taken control of Dana and isolated the crew into the back half of the ship. Tessa and Kaname are held prisoner on the bridge, helpless to stop Gauron.

Sousuke gets oriented in his Garbage Duty and Kurtz gets to know the targets a little better. Meanwhile Tessa takes care of a research center in Russia. Sousuke's team encounter a mysterious man climbing to Kaname's balcony.

Flashbacks of Kurz and Sousuke's time as trainees.

The airplane with Sousuke, Kaname and 400 of their classmates is hijacked and brought to a secluded location. Kaname is taken away from the plane, but what will Sousuke do to rescue her?