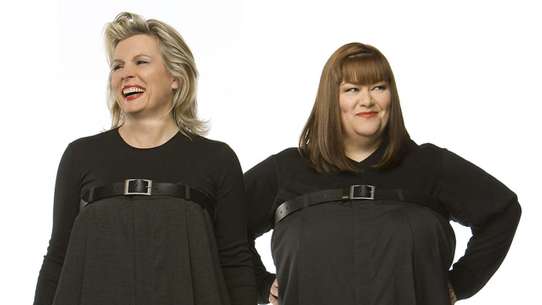 The BEST episodes of French & Saunders

French and Saunders, the world-class comedy duo, have been around now for nearly 20 years entertaining us through the box in the corner. French and Saunders are famous for many takes/spoofs; but most notably the world famous comedy show Absolutely Fabulous, which started in the late 80s, early 90s as a small sketch of a modern mother and daughter. For the first four series they were joined by the spoof middle-of-the-road comedy cabaret duo Raw Sex (Rivron and Brint), who also supported in the sketches. In the 1996 series the duo returned to our screens for more hilarious takes of Baywatch, Braveheart and the singer Bjork. After many years without a series French and Saunders returned in the fall of 2004 for a 6th series of the smash hit comedy.

This week, still struggling to come up with ideas, French & Saunders have to meet with the controller of BBC One (Eve Pollard). Plus they pay tribute to Cher through the ages and Catherine Zeta-Jones is in conversation

Dawn French and Jennifer Saunders go behind the scenes at the BBC, with sketches featuring old favourites, new characters and film parodies. Dawn and Jennifer's first day at their new office and they meet their producer. Sketches include Dawn's unusual medical check-up and an homage to the film Cold Mountain.

Dawn and Jennifer round off the series with more fantastic sketches and a medley of hilarious silver screen send-ups. Jennifer visits Dr. French for a nose job. Other sketches include a parody of Jane Seymour, the extras meeting June Whitfield, and a string of Hollywood parodies. Musical guest: Lulu performing "The Man Who Sold the World". Additional music: Raw Sex performing "Mambo Italiano"; French and Saunders performing "The Way We Were".

Despite having a new series to write, Dawn French is preoccupied with the fact she has been invited to go on Fit Farm but doesn't really know why. She also fulfills her dream of singing on Top Of The Pops with Anastasia, and the movie Troy gets a make-over, with Jennifer Saunders as Brad Pitt's Achilles and Dawn as the ethereal Helen.

Jennifer's Marilyn Monroe and Dawn's Jane Russell spell it out with an outrageous rendition of Diamonds Are A Girl's Best Friend. Ken and Duane imagine suing the publisher of an "easy" sheet music book; and "Modern Mother and Daughter", the basis for Absolutely Fabulous. Musical guest: Kirsty MacColl performing "Still Life".

Dawn and Jennifer pay homage to The Silence of the Lambs, and there's a unique appearance by The Mamas and Papas.

Dawn French and Jennifer Saunders return with a spoof of Baywatch and Helen Mirren desperately trying to reinvent herself.

More skits and sketches from Dawn and Jennifer, including a spoof of Pulp Fiction.

In the office, Dawn and Jennifer have to offer their ideas for new programmes to the Controller of BBC ONE. Sketches include a tribute to Madonna and Chris Martin's Mum.

Episode one of the new series starts filming. Dawn and Jennifer delay production, through a combination of laziness and constantly getting lost, but meet with an allegedly ill teenager and his mother. Sketches include retirees who move to Florida, Dawn babysitting for a giant, and Chris Martin's mum.

Dawn French and Jennifer Saunders round off their series with more comedy sketches and special guest Jane Asher. Dawn and Jennifer start a casting agency but manage to insult all of their clients. Musical guest: Sarah Walker performing "I Should Be So Lucky".

French and Saunders have Gone with the Wind with Jennifer as Scarlett and Dawn as Mammy. Musical guest: Kirsty MacColl performing "Don't Come the Cowboy with Me Sonny Jim!"

Featuring a memorable reenactment of the film 'Misery' and an exclusive performance by Dickens Daughters.

The Fat Men get somewhat over-excited while watching the Miss World contest on TV, and there's a sparse audience at a Kilroy spoof. Musical guest: Toyah performing "Because the Night"

The hills are alive with the sound of French and Saunders as Dawn and Jennifer parody The Sound of Music. With special guest Jerry Hall. Other sketches include parodies of ABBA and Sonia, and the first appearance of Pear Tree Farm. Musical guest: Kirsty MacColl performing "Fifteen Minutes".

French and Saunders pay their own comic tribute to the serial House of Eliott and there are comic takes on Pan's People, Gladiators and the royal family.

Behind the scenes in the office, Dawn is feeling ignored and wonders why she hasn't been invited to the Palace to meet the Queen. Jennifer has been invited and instead of writing scripts is practising her curtsey. Sketches include tributes to Kill Bill, Most Haunted and Catherine Zeta-Jones.

Dawn French and Jennifer Saunders develop Dangerous Liaisons with more outrageous parody. With special guest Joan Bakewell. Other parodies include Birds of a Feather, Tanita Tikaram, and The Factory.

The talented comic duo return for a second series with Dawn handing out some muddled contraceptive advice to Jennifer. Musical guest: Squeeze performing "853-5937"

#25 - Whatever Happened to Baby Dawn?