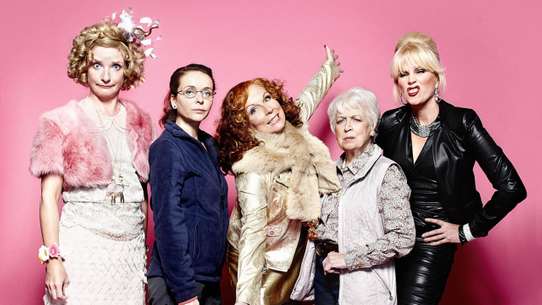 The BEST episodes of Absolutely Fabulous

When Eddy converts her bomb shelter into a panic room, she and Patsy accidentally get locked in and, not knowing the access code, have to wait until the system resets and the door opens.

After Patsy cracks her wrist and finds out she is has osteoporosis, Saffron sets up a menopause meeting for the pair. Edina's businesses are going under and it seems that everyone is undergoing change. Then Saffron starts having day-dreams about the possible future...

Saffy grudgingly agrees to let Eddy babysit Jane while she and John go to lunch, but as soon as they're gone, Eddy whisks her off to the zoo where Patsy has arranged for her to be part of a photo shoot with famous photographer, Jean-Paul Gaultier. Saffy's anger at her mother is softened when Eddy confides she and Jane bonded; that is, until Saffy makes a shocking discovery.

Edina's 'new' boyfriend Pete, who she and Patsy knew growing up, works at Abbey Road Studios and uncovered some "lost tapes" of the Beatles. They throw a party to play them in public for the first time and things don't quite go as planned. Elton John does a cameo.

Eddie gets very depressed that she doesn't win the PR Person of the Year Award and almost works herself to death trying to gain revenge. Saffy's psychology lecturer starts giving her some "extra special tuition" and Eddie comes to her daughter's aid for one of the few times in her life.

Eddie's father passes away and she is more concerned about how much weight she has put on and Saffy is horrified at her mother's selfishness regarding the death. It soon makes Eddie realize that she is also going to die and she goes out and spends hundreds of thousands of pounds on art that she doesn't want, just so she can leave something behind when she dies.

The big day has finally come and Saffy goes into labor. Everyone is there except the midwife who is unable to get into the house after the power goes out because the doors, which lock electronically, cannot be opened without electricity.

Despite having tried every fad diet going, Eddie is still desperate to be thin, and decides to try detox. Spurred on by a Sex And The City-style lunch with her bitchy girlfriends, Eddie embarks on a strict regime of water and red meat and enrolls herself in a grueling military fitness program. Despite Patsy's best efforts, Eddie swears off champagne and begins to shed the pounds. But her nights are plagued with visits from God and the Devil, who have their own agendas. Meanwhile, budding playwright Saffy bumps into a pretentious old school friend, Taylor Johns, who attempts to use her in his bid to further his acting career, and Patsy decides to see what life is like without her trademark Sixties forelock.

Patsy moves in to live with Edina when Saffy goes off to college. However it proves to be a turbulent arrangement, especially when they can't find the tin opener. Further trouble errupts when Lulu arrives at Edina's office to terminate her contract and sign with a high-powered American PR agency. Patsy loses her job when her magazine folds, leaving the high-living pair contemplating old age and a crossroads in their lives.

Eddy and Patsy organize a book club to meet famous people, but no one is interested in reading anything except celebrity gossip magazines. Eddy has recurring nightmares about Saffy's midwife, who delights in teasing her about them. She's very unhappy about the expected grandbaby until she learns the father is black... after all, a mixed-race baby is the greatest accessory, the "Chanel of babies."

Patsy has an injection to freeze her wrinkles; Edina is due to make an appearance on the TV show "This Morning With Richard & Judy"; Saffy is looking for a job with New Labour and Mother is finding out the delights of the internet

As the kitchen is being rebuilt after the fire in last series finale, Eddie is hell-bent on searching for the perfect door handle to match her decor, and she and Patsy take a day trip to New York on the concord to track one down.

Edina and Patsy spend the weekend at a snooty lodge in the country and become so bored, they create their own version of fun. Meanwhile, Saffy has her friends, Emma and Sarah, over for a baby shower and Sarah becomes obsessed with Emma. The weekend ends with Emma getting a restraining order and an unexpected turn of events for Sarah.

Patsy burns down Eddie's kitchen with her cigarette when she falls asleep. Forced to live out of the sitting room, Eddie and Patsy plan a night out which suits Saffy as she is having a boy around to watch a documentary. Unfortunately for all, Mother accidentally locks them in the sitting room and Eddie tries to open up to her daughter and talk to her about sex and her birth, despite Patsy's comments.

While Saffy plans to spend a quiet New Years Eve with her Gran and Justin, Eddie and Patsy prepare to join a huge underground rave party to see in the new year, but things change when word comes of the visit from Patsy's long lost sister Jackie who is notorious for being a 60's party animal. Upon her arrival, Patsy is distressed to learn that her sister (unlike herself) has actually aged in the last 30 years.

Eddie wants to have a bigger bedroom and debates which of the two walls to knock down; one leading to Saffy's room, the other to Serge's. Eddie and Patsy go into Serge's room to clear it out where Saffy discovers a copy of 'Razzle' amongst his magazines (thankfully not the one that Patsy appeared in!). Despite Saffy's objections about the magazine, Eddie leafs through it and realizes that it has been awhile since she has had sex. Patsy talks her into hiring two male prostitutes on the night that Saffy has a presentation at school, both of which don't go off as smoothly as they would have liked.

Patsy is caught having an affair with a politician and is pushed into the tabloid spotlight which reveals her true age. Eddie stubs her toe and "requires" surgery. Patsy joins her in hospital for moral support - and a facelift.

Eddie is turning 40 and Saffy organizes a quaint family get-together for her involving Mother, Justin (Saffy's father), Justin's lover Oliver, Marshall (Eddie's son Serge's father) and his new wife Bo. However, Eddie has developed a complex about her age and refuses to participate in the celebrations.

After Patsy and Saffy both move away from her, Eddie moves to a commune where she tries to fit in but doesn't have a chance. Patsy's new job is not what she was expecting and Eddie turns up in New York where she meets her on the top of a building in a helicopter before heading back to London. There is also a sneak peek at them in 25 years time.

Saffy's first play, "Self Raising Flower," based on her life is opening at the local theatre and Eddie worries that it will portray her as a bad mother, which of course it does.

Patsy and Eddy are forced to clean up the house in preparation of Saffy returning from Iraq. When Saffy returns, she has a big announcement.

Patsy agrees to put a Fashion spread in her magazine of the product Edina is promoting called "POPSPEX", and they both go to Marrakesh for the photo shoot. Saffron wants to go with them to help her university studies but Patsy ends up selling her to white slave traders.

Banned from attending Saffron's college open day, Edina sulks in her brand new isolation tank. But she's got a few tricks up her Lacroix sleeves yet.

After rocking on at a Marilyn Manson concert, Eddie finds an attractive young man in her garden. Patsy recognizes Jago, the landscape gardener hired by Saffy, as the brother of a well known aristocrat and Eddie turns on the charm to get her dream of a huge mansion with servants.

Edina and Patsy go on holiday to France but the luxury they've booked turns out to be the ramshackle cottage. Unable to negotiate the local shops, Edina calls up Saffy for help. Bubble turns up, too, with news that Edina's interior design business has hit problems.