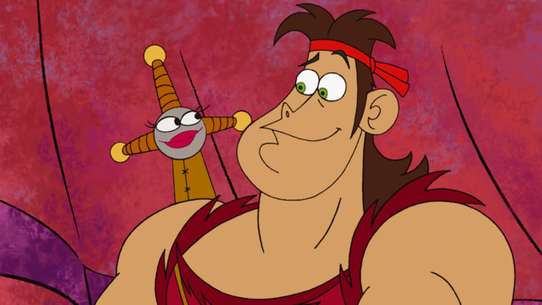 The BEST episodes of Dave the Barbarian

This animated comedy series is set in the Middle Ages and follows the title character, Dave, in his comedic adventures with his family (his sisters, Candy and Fang) as they protect themselves and their family from a world of oddball foes. Dave himself combines strength with an appreciation of the finer things in life, including origami, bird watching, and even gourmet cooking.

Dave begins dating Princess Irmaplotz, but breaks up with her when he learns that she is evil. Irmaplotz is upset about the break up and sends an army of filthy pixies to attack Udrogoth.

Lula's old owner, Argoth The Ageless, comes to town and Lula wants to find some way of getting him to come back to her.

Dave believes helping others is his whole purpose in life and starts giving out advice as a "psychofloobicologist."

Candy has difficulty paying off an expensive spending spree.

#5 - The Maddening Sprite of the Stump

Lula gets stuck in a tree stump during Dave's attempt to guard the Enchanted Forest against a giant man-eating muffin. When the royal family is unable to free Lula, a tiny, winged sprite establishes himself as the ruler of Udrogoth

Well, its the beginning of spring and that means only 1 thing for Dave...SPRING CLEANING!! The rest of the family run away from the castle to avoid cleaning. Dave uses Dusty, the magical cleaning broom and sweeps the castle. After months of cleaning, Dave is in need of one more thing, Castle Polish. Oswidge finds a coupon for Castle Polish at 1/2 price, so they go to the Fortress of Cleanliness, only to find that the Fortress of Cleanliness is the Fortress of Uncleanliness and is a trap set by The Dark Lord Chuckles The Silly Piggy and are forced to clean for him. The family wants to leave, but Dave is too obsessed about cleaning and doesn't want to leave...

Fang's barbarian idol arrives in town to settle a grudge against an unsuspecting Faffy.

Faffy is sad because the family forgot to get him anything during Dragon Appreciation Week, so Dave buys Faffy a diseased weasel for a pet. The diseased weasel gets all of Dave's attention, so Faffy runs away. The weasel turns out to be Chuckles The Silly Piggy, who wants to steal a magical fruit hidden in Faffy's room

Dave faces losing his barbarian title if he cannot pass a pillaging test.

Dave in his capacity as temporary ruler of Udrogoth forces the citizenry to attend his musical production, "Oh, Pastry!"

The teen protectors of Udrogoth spend their downtime jamming in a popular rock band.

The princess demands Oswidge come up with a magic spell to remove a pimple from her face on the night of the Barbarian Ball.

Candy's quest for an ultra-trendy antler hat takes her outside of the kingdom and in direct conflict with Chuckles the Silly Piggy.

Fang gets a illness, so Uncle Oswich and Dave take her to the doctor. The doctor says that Fang gets the illness that only monkeys get. Fang can only get the cure from the island far far away. The cure is berries. After a long cruise, they reached the island. Fang sets out to find the berries but she is taken away by a pack of monkeys. They accept her at first but when eats the berries and she isn't cured, Fang realizes she is not a monkey. But she is in trouble when she gets chasen by monkeys and Dave is chasen by gorillas.

Fang gets some pants sent by her parents and doesn't bother to read the note that came with them. This is problematic, because the note explains that the pants are the evil trouser beast and will take control of anyone who wears them. Fang loves the pants at first because they give her fantastic strength – at last she's as strong as Dave! But soon the pants take her over, using her as a tool to get revenge on their hated foe... Oswidge.

After promising never to mess with Dave's life again... Fang does it again. She swipes some of Oswidge's magic and makes some of Dave's flowers – his prized Purple Winkies – grow huge. Surprisingly, gigantic ravenous flowers cause a few minor problems, which Fang struggles to conceal from Dave

To make Dave brave, Fang makes him wear the Red Sweat of Courage. Unfortunately, Dave becomes so brave that he insults Chuckles The Silly Piggy, Malsquando, and Quasmire, so the three villains team up to destroy Udragoth.

Evil Princess Irmaplotz summons fourth a cow like something milky to bite dave after he swims in the milk, thus in a month later when the moon is full, making dave a Were-Cow. After terrorizing the villagers, dave is bitten by a cat. He is bitten by an array of other things, including an Egg Beater and the Gym instructor. In the end the gang make dave bite his tongue with a sheet of paper, causing him to become a Wear-Dave. But Fang thought that he's a non-weary Dave so Dave is back to normal before Irmaplotz was surprised that the gang breaks the code making Dave back to Normal. In the next morning, Dave accidently bite Faffy thus Faffy becomes Faffy-Dave singing "Funny Bunny."

Dave gets an ingrown toenail, so he quits being a barbarian and starts a restaurant. When the rest of family tries to ruin Dave's restaurant by stealing his cookbook, Dave starts making recipes from an evil cookbook, causing all of his cooking to come to life and attack.

Uncle Oswidge has the "Hicats" and need to go to Malsquando's, only to realize that Malsquando knew Oswidge back in the past and tells Dave and Fang that Uncle Oswidge worked in a cafeteria and never went to sorcery school.

Dave's horrendous playing of a bagpipe-like instrument is enough to stir an angry god from his subterranean resting place.

Princess Candy must help the Lost Race of Reeber reclaim its land.