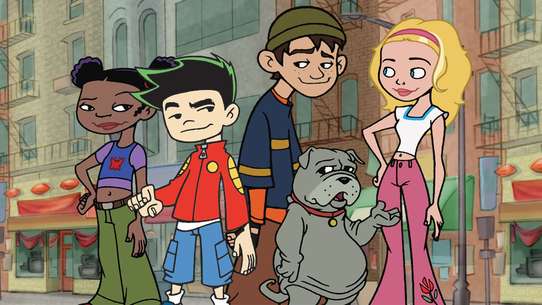 American Dragon is a coming of age comedy-action series about Jake Long, a 13-year-old Asian-American boy who strives to find balance in his life as a skateboard-grinding, New York 'tween while learning to master his mystical powers (in his secret identity) as the American Dragon, the protector and guardian of all magical creatures secretly living amidst the human world.

Jake and Rose are nominated King and Queen of the Homecoming festival by their school's Homecoming Committee, Spud and Trixie join the Floats Committee in order to get closer to their crushes. Jake is then betrayed by Rose who is being blackmailed by the Huntsclan.

When the Longs attend a Florida family reunion, Jake must deal with his annoying cousin Greggy and an aquatic villain bent on flooding half the continent.

Spud participates in the talent show as a magician. Trixie and Jake promise to help him win. But the trophy for the winner of the talent competition imprisons an ancient evil djinn. Jake needs to enter the talent show as the ventriloquist sidekick of Fu - and get the cup before Professor Rotwood does and unleashes the monster inside!

Professor Rotwood manages to get a blurred photograph of Jake and the Huntsgirl fighting, so naturally he's driven into a frenzy to get concrete evidence. He offers a reward of $500, and Jake takes it up (so they can replace Trixie's parents' anniversary gift that they broke). Ironically, everything he submits (His scales, etc.) is dismissed as fake. However, in their next fight, the Huntsgirl knocks Jake out and Trixie and Spud come across him. They immediately take him to Rotwood and get the money, but when they reach Jake's house and discover pictures of him 'dragoning up' (which was idiotic of him to take) they realize that they have to get him back.

#6 - The Legend of the Dragon Tooth

Jake tries to attend a Hip Hop Music Awards with a performance by Jake's idol singer. Unfortunately, he promised he would babysit Haley at the same time. And to top it all off, a crazy dentist tries to steal Haley's loose Dragon tooth, which has magical powers to unleash an unstoppable evil!

Panderas, the "Wizard of Wall Street" has stolen the leprechauns' pot of gold and Jake must steal it back (with the help of a few friends) so that they all don't die from bad luck.

A troll goes in Jake's home: the troll wants to stay there beacause he hates the sun. Jake has to hide him!

In order to win Rose's affection and set up a number of dates with her, Jake enters the school play ""Anthony and Cleopatra"", with him and Rose playing the leads. However, there is a kissing scene (Act 4 Scene 15) and when rehearsing with Rose, Jake freaks out. To make matters worse, the Huntsclan are after a scarab beetle that Jake has, so Rose (a.k.a. Huntsgirl) naturally sees it when Jake brings her to the shop. What follows is a series of close shaves and hints to true identities, but neither of them guess the truth.

Jake and the entire family head to Hong Kong for summer vacation, but must face off against the dreaded Dark Dragon when Grandpa is kidnapped.

Jake gets fed up when Grandpa puts him through a series of seemingly pointless training exercises, but when the Huntclan forces him to battle, will he be able to take all that his Granpa gave him and use it in time of need?

Jake accidentally turns Haley on to the life of rebel wild child, with the help of a twisted magical children's show host who's much more sinister than he seems.

Jake discovers that his ancient, out-of-touch grandfather was once a swinging, styling super-agent in 1970s Hong Kong, China, who had completely changed after defeating the Dark Dragon. Jake comes into conflict with the Dark Dragon again and Councilor Chang's duplicity is revealed.

Jake comes down with a serious case of Dragon breath just as Fu Dog sets him up on a date for the school dance. Jake's date turns out to be a soul-sucking Nix and turns the school dance into a magical battle royale.

Jake speculates about his dangerous relationship with Rose/Huntsgirl and is shortly afterwords captured by her and the Huntsclan to feature in their "Grand Equinox Hunt" whereupon they will let them go at dawn in order to hunt them down for trophies and give Huntsgirl her chance to fulfill her destiny. Jake meets up with many other mystical creatures that are also to be hunted and together they escape the Huntsclan camp. Jake learns to be a good leader and ends up showing Rose that the American Dragon is himself.

While volunteering to mind Grandpa's shop on Chinese new year, Jake accidentally curses it with bad luck and must face the consequences.

Jake gets sucked into the bling-bling lifestyle when he starts working for a semi-shady leprechaun clan.

Jake accidentally gets Rotwood fired, and ends up with a Principal who's even worse, meanwhile Spud tries to "woo" Stacey with onions.

Jake goes on a camping trip with his dad, Spud and Trixie. They found out that a sprite/pixie clan were threatened by a monster. While Haley and her mom went for a spa but boarded the wrong bus to boot camp.

Jake, Fu-Dog and Grandpa go to meet the Dragon council on the other side of the world. Jake has to pass two out of three tests - Courage in Flight, Knowledge in Battle and Using Dragon-Fire. However, he meets an Austrailian snob, who keeps pranking him and annoying him. The #1 Villian, the Dark Dragon is living in a cave nearby, though.

An enchanted mirror switches the bodies of Jake and Haley for a day.

Jake and Gramps go for this Dragon Retreat for the weekend. They leave the electricity shop with Fu, Trixie and Spud - who want to proove they are useful sidekicks after messing up at recent missions. They mess the whole shop up. But then, mountain trolls terrorize the Market. And since Fu cannot call Jake, he tries to teach Trixie and Spud the responsibilities of the American dragon, wearing an enchanted costume. Only things don't work out the way they want it...

When Stacey and Nigel become an item, a jealous Spud decides to do anything to win her affection... including striking an unholy deal with Fury, the sinister gorgon.

Spud is bitten by a magical frog, and begins to develop cool "froggy" powers. He enjoys all the perks of being part magical-that is, until #88 and #89 come 'a magical frog huntin'.

Maya and the Three