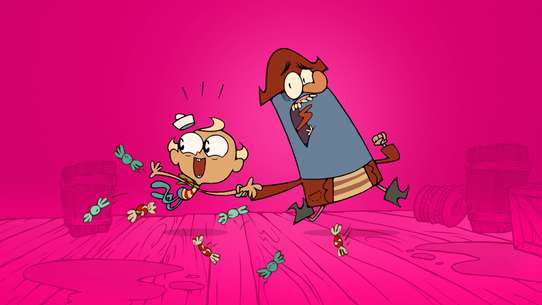 The BEST episodes of The Marvelous Misadventures of Flapjack

The Marvelous Misadventures of Flapjack follows a young boy named Flapjack who was raised inside Bubbie, a talking whale. After Flapjack rescues a shipwrecked crusty old pirate named Captain K'nuckles, the misadventures begin. The pair set sail in search of the magical Candied Island filled with lollipop trees and lemonade springs, but then trouble gets in the way.

K'nuckles and Flapjack stow away on a ship and arrive at an island they believe to be Candied Island. However, it is inhabited by a terrible beast named Cammie. K'nuckles attempts to build a raft in hopes of escape, while Flapjack befriends the monster and helps her get some food. K'nuckles attempts to build a raft three times; one out of sardines, which is stolen and eaten by a great white shark, one out of bananas, which is stolen and eaten by an "undersea gorilla", and one made out of wood, which Flapjack pointed out would not float. Eventually, Cammie simply gives them a new boat for them to get back to Stormalong.

K'nuckles dimwittingly misleads Flapjack into the mouth of Eight-Armed Willy, not knowing his left from his right. This causes Flapjack to believe it is his fault that they could not navigate the map. He and K'nuckles, instructed by Bubbie, go to school in order to receive an a basic education in navigation. However, a more devious plan is being hatched in the schoolhouse that the adventurers are unaware of.

K'nuckles dimwittingly misleads Flapjack into the mouth of Eight-Armed Willy, not knowing his left from his right. This causes Flapjack to believe it is his fault that they could not navigate the map. He and K'nuckles, instructed by Bubbie, go to school in order to receive an a basic education in navigation. However, a more devious plan is being hatched in the schoolhouse that the adventurers are unaware of.

#4 - Shave and a Haircut, Two Friends

K'nuckles locates a map that supposedly leads to Candied Island, but when Flapjack goes "blind" due to his long hair covering his eyes (developing superhuman hearing and seeming telepathy in the process to compensate), a group of barbers steal the map. Flapjack and K'nuckles chase after the barbers in hopes of regaining the map, which turns out to not be a true map at all, but a goofy note Flapjack wrote to K'nuckles about their friendship.

#5 - Several Leagues Under the Sea

Flapjack tells a crazy inventor that Bubbie is faster than a machine.

Flapjack and K'nuckles consume a new drink at the Candy Barrel, but when they drink too much, it turns them into fish.

Flapjack tries to clear K'nuckles' name when he gets accused of stealing candy.

To celebrate Flapjack's birthday, Captain K'nuckles and Flapjack sail westward, as forced by Bubbie in search of Candied Island. Flapjack is oblivious to the danger around him, despite scenery such as burning ships, monsters, crazy old hermits, and other such hazards. The mere mention of the word "West" causes monsters to appear, and the entire direction is shrouded in a "curse". After hours of traveling west Bubbie and K'nuckles declare that there is nothing in the west and try to go home. However, Flapjack builds a raft to keep sailing west, taking K'nuckles along for the ride. K'nuckles and Flapjack go crazy after drinking seawater, suffering hallucinations, but Bubbie rescues them. At the end, Bubbie gives Flapjack a "W" for his compass, but K'nuckles sold the compass for maple syrup. K'nuckles uses the "W" as a bottle opener and throws it into the ocean.

Flapjack keeps getting mistaken for a girl so he and Captain K'Nuckles attempt to man him up, only to discover that his voice is the problem.

Peppermint Larry refuses to give Flapjack and K'nuckles any candy unless they bring him candy wrappers to exchange for the treats. Selfishly, K'nuckles takes all of the candy for himself, breaking Flapjack's heart. He discovers Larry's true plans when trying to exchange more wrappers; the wrappers formed a map when put together leading to Candied Island. K'nuckles tries his best to regain Flapjack's friendship. He does this, but Flapjack destroys the wrapper that Peppermint Larry needed to get to Candied Island. Once K'nuckles explains all this, they forge the wrapper and trade it in. Peppermint Larry then attempts to use the map to get to Candied Island, but instead it leads to Pickled Island. He is still happy that he has his candy-wife with him; however, this changes when he sees her having an affair with a giant pickle.

Flapjack makes Doctor Barber a friend out of candy.

Flapjack and Captain K'nuckles are swindled by a mysterious man named Ben Boozle, and are forced to work on his ship until Flapjack is able to achieve the rank of captain.

When taunted by a rich kid for being poor, Flapjack and Captain K'nuckles search for diamonds that the boy claims is in the sewers of Upper Stormalong Harbor.

When it is thought that Flapjack has fallen in love with a girl named Sally Syrup, Peppermint Larry and Captain K'nuckles hoping to profit from the arrangement, by stealing the lovehearts that pop out of his head.

When Flapjack helps Captain K'nuckles look for his lost hat on an island filled with chimpanzees, they end up encountering a researcher that lives among the animals. With her help, they must reach the "secret meeting place".

#16 - K'nuckles and His Hilarious Problem

Flapjack tries to break Captain K'nuckles of his candy addiction after he develops candy rot. After several attempts to keep him away from sweets, Flapjack and Bubbie send K'nuckles into the sea on a raft.

Flapjack gets invited to a birthday party, but feel embarrassed when the other kids perceive K'nuckles and Bubbie as 'weirdos', including for himself.

Captain K'nuckles steals a mermaid queen's heart filled with candy wishes, with the intention of him and Flapjack to get to Candied Island, but they quickly misuse the wishes and learn a terrible secret about the mermaid.

Flapjack attempts to create a brother for himself.

#22 - These Boots Were Made For Walking (On Your Face)

K'nuckles gets a new face in order to avoid a mob after stealing boots, but ends up caught in the mob.

After winning a poker game, Captain K'nuckles ends up losing Flapjack as a friend.

Flapjack and Captain K'nuckles suffer from a severe case of foot burn (sunburned feet) after sleeping in the sun. And on their quest to treat it, they discover a hideous trolley driver whom K'nuckles knew from his past.

Flapjack and Captain K'nuckles can't escape the Dock Hag's house, after a feeble attempt at destroying K'Nuckles dock tickets, only to discover that the Dock Hag has a crush on the pirate.