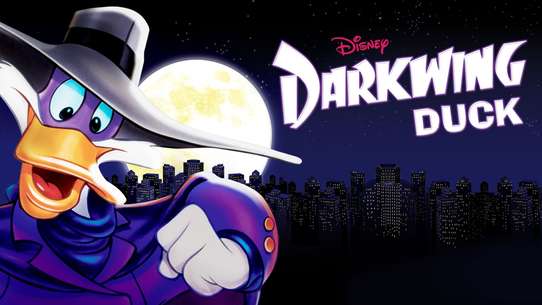 The BEST episodes of Darkwing Duck

In the city of St. Canard, the people are plagued by the most bizarre criminals, but they have a protector as well, Darkwing Duck. This bumbling and egotistical superhero battles evil in that fair city with the help of his pilot sidekick, Launchpad McQuack and his rambunctious adopted daughter, Gosalyn.

A nefarious criminal from the past returns, to profit by auctioning of all a complete list of S.H.U.S.H.'s secret agents. J. Gander teams up Darkwing with the legendary Derek Blunt to intercept the documents before they fall into the wrong hands.

A series of supernatural pizza topping thefts leads DW to the place that is home to St. Canard's mushroom production: McCawber Mansion. However, instead of keeping his thoughts on the case, he ends up falling for Morgana McCawber, the chair of the company. Can he crack this mysterious case, or has the hero been bitten too hard by the love bug?

#3 - Battle of the Brainteasers

Alien hats from outer space invade earth, take control of a slew of nuclear weapons, and demand to be made rulers of the universe.

Quackerjack, posing as a psychiatrist, convinces Darkwing that being a superhero isn't right for him. With Darkwing out of the picture, the criminal is free to go on a crime spree.

During a battle between Darkwing, Megavolt and Quackerjack, Gosalyn ends up aboard the villains Time Top, just before it starts up and takes them to the future. There, Gosalyn finds out that Darkwing has become Darkwarrior Duck, and enforces the law with an iron fist!

Darkwing goes undercover at a health spa to root out a pair of workers responsible for a museum break in. To his dismay, Herb and Binkie Muddlefoot tag along. The health spa owner, Jock, has discovered the formula for a fountain of youth. The last ingredient he needs is a feather from a true hero.

To get revenge on Darkwing, Jambalaya Jake has Granny Whammy mix him up a hex. He mistakes Launchpad for Darkwing (while he is posing as Darkwing Decoy) a targets him with the curse. Now Jamabalya is using Launchpad as a partner in crime, and Darkwing is getting all the blame for it.

Launchpad gains psychic powers, but has trouble controlling them. F.O.W.L. agent, Major Synapse, steals S.H.U.S.H.'s Nora Ray, and uses it on his underlings to give them super brain powers.

Moleiarty, the fiendish genius marketer and mole from the deep underground, has rallied his fellow race for an attack to take over the surface city of St. Canard. Stealing buildings, he creates a beam to lock the moon in an eternal eclipse, to plunge everything in darkness.

Darkwing investigates a case in which money disappearing along with the bank vaults!

When Honker's parents go missing, all clues point to the mysterious Twin Beaks. A mutated alien race of cabbages have begun their conquest of Earth from this unseemly town.

Darkwing's computer goes haywire, and causes him to trade bodies with Gosalyn. Now she must pose as Darkwing to stop F.O.W.L.'s latest scheme - stopping the Earth's rotation in an attempt to blackmail the planet. Can DW defeat Steelbeak in a child's body? And how can they reverse the body swap?

Darkwing Duck investigates the production of movie, which is plagued by accidents and is being directed by none other than Tuskernini, who has abandoned his life of crime for the cinema. But what happened to the space aliens?

Jambalaya Jake and his Alligator, both from the Bayou, have moved to the city after hearing it was ""easy pickings"". Darkwing shows them firsthand that that it is hardly the case.

Drake takes Gosalyn on a camping trip in order to teach her about the great outdoors. The national park has been evacuated due to a monstrous bear that has been attacking both campers and wildlife alike.

Negaduck steals a diamond that can steal others' powers. And after he steals the powers from Bushroot, Megavolt, Liquidator and Quackerjack, they need to use their weaknesses to stop him.

#18 - A Revolution in Home Appliances

Megavolt gets zapped with his new invention, which lets him turn regular Home Appliances into living things. He soon controls a barber chair, a refridgerator, a guitar, and a tv. Now Darkwing Duck has to stop them before they take over.

Darkwing Duck goes Back in time with Goslin and he meets himself in high school when he was known as ""Drakey"". He Then sees a record shop's register being robbed. When he does not do anything, his world gets changed. Now they have to fix the mess they made.

Infuriated at how he's portrayed in his new comic book, Darkwing decides he can write it better himself. But he keeps getting interrupted by everyone, who then add their own little bits...Finally, even Megavolt joins in and the result is a hilariously funny romp through Comic Book Land--which the editor hates. No matter, Darkwing is off to see Disney about a contract.

Fenton/Gizmoduck heads to St. Canard after Steelbeak. The F.O.W.L. agents soon finds out and frames Darkwing so Gizmoduck will think he's evil. The two fight it out, while Steelbeak tries to steal a new, top-secret weapon.

A Sprit named Paddywhack is unleashed from a jack in the box when Gosalyn gets into mischief, and possesses Quackerjack's doll, Mr. Banana Brain. As he causes trouble alongside the demented toymaker, he grows, feeding from the negative emotions around himself.

Under Darkwing's care, Gosalyn ends up revealing the ramrod arming code in the form of a lullabye her Grandfather used to sing. But a newly escaped Taurus Bulba lures Darkwing out into the opening to both find his secret lair and turn him over to the police. Launchpad, Darkwing's biggest fan springs him loose, becoming his new sidekick at the helm of his fanmade superhero jet - the Thunderquack. They race to Bulba's flying base of operations for a final climactic showdown which ends in a shattering explosion around both Darkwing and Taurus. Later, a bruised and battered Drake Mallard (aka DW) arrives at Gosalyn's orphanage to adopt her.

SHUSH has given Darkwing Duck a simple case: Travel to Oilrabia and stop Steelbeak's schemes to steal their oil. Steelbeak's plan: flooding the place with his weather machine and attacking by sea. Darkwing's big problem: He picked THIS day to let Launchpad assume role as hero and be a sidekick himself.

Negaduck, Bushroot, Quackerjack, Megavolt, and Luqidator all join together as the Fearsome Five to defeat Darkwing Duck and take over St.Canard. When the other superheroes hear about this Neptuna, Gizmoduck, Morgana, and Stegmutt band together to fom the Justice Ducks. Darkwing is less than thrilled, however, wanting all the credit for their defeat. But when he faces the Fearsome Five, he soon finds out the job is more than he can handle.