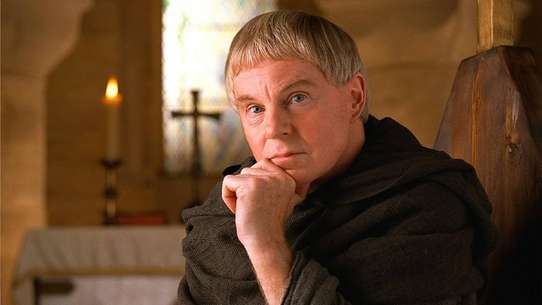 The BEST episodes of Cadfael

Every episode of Cadfael ever, ranked from best to worst by thousands of votes from fans of the show. The best episodes of Cadfael!

Brother Cadfael is a twelfth-century Anglo-Welsh monk created by the late Edith Pargeter writing under the pen name of Ellis Peters. A retired crusader disappointed in love, now a herbalist in charge of the gardens of Shrewsbury Abbey, Cadfael (played by Derek Jacobi) is often called on to solve murders and other crimes in and around Shrewsbury, Shropshire, in the border country where England meets Wales.

The monks of Shrewsbury go to Wales to recover the bones of St Winifred. But their attempted bribery of the Welsh puts them at odds with the local residents - and when the local landowner is found murdered, the monks are regarded as prime suspects.

Cadfael puts Hugh Beringar to the test, and Hugh has to choose between loyalty to the king and friendship with Cadfael. Meanwhile, at the annual St Peter's Fair in Shrewsbury, townspeople come into conflict with the Abbey's officers and with visiting merchants. A curfew is ordered, but not fully observed - then Cadfael finds he has a murder to solve.

Cadfael's novice, Brother Oswin, is found close to death, babbling about a woman. When a nun is found raped, murdered and encased in the ice of a frozen stream, Oswin is accused of murder. Cadfael tracks the nun's companion, Ermina Hugonin, and sets out to prove Oswin's innocence.

Dalny, a beautiful slave girl, is abducted from the Abbey - and the relics of St Winifred are also spirited away, apparently by the same thief. Cadfael is commissioned to find them both.

The dead body of an elderly man is found hidden in a sack at the Abbey, and Cadfael believes he was murdered. The principal suspects are a group of pilgrims, who include two known thieves. Cadfael locks them up, in a bid to draw out the killer.

A potter's wife dies suddenly, and he gives up his old life to enter the Abbey, but the other monks suspect him of having killed his wife. As Cadfael investigates the death he finds a curious web of jealousy, infidelity and suicide.

#7 - The Raven in the Foregate

Cadfael is on a double murder hunt following the deaths of a pregnant girl and the priest who refused to take her confession.

The recently-widowed wife, Judith Perle, of a rich merchant becomes the object of interest for the men of Shrewsbury. But then a monk and one of her suitors are murdered.

When Shrewsbury's goldsmith is robbed and left for dead, the locals launch a witch-hunt. Pursued by the mob, the prime suspect, a young juggler who performed at the wedding of the goldsmith's son, seeks sanctuary at the Abbey. But as Cadfael investigates, a second body is found floating in the River Severn.

A rich landowner cuts his stepson out of his will to leave his fortune to Shrewsbury Abbey, and is found poisoned. When Cadfael is called in to investigate, he is shocked to find that the dead man's wife is his own childhood sweetheart, whom he has not seen for forty years.

A rich priest is found killed, and the finger of suspicion points to a new monk at Shrewsbury Abbey. Meanwhile, a civil war raging around England is piling political pressures on the Abbot. Cadfael investigates the murder and uncovers a tangled web of dishonesty and nepotism.

Brother Cadfael has settled down to a quiet religious life at Shrewsbury Abbey after an adventurous, and far from monastic, youth. But when he uncovers a murder, he turns detective to solve the crime.

A great wedding is to take place at the Abbey, between a beautiful young girl and a powerful baron. But this is no love match, and when the baron disappears before the wedding, Cadfael is on the case.