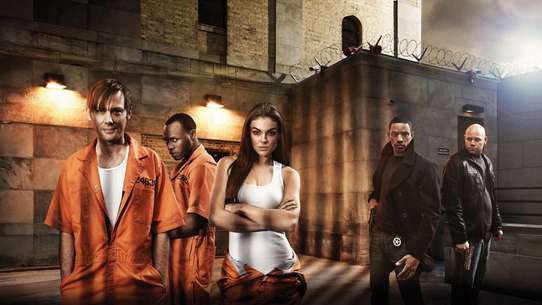 The BEST episodes of Breakout Kings

Driven by the fact that there are few things more dangerous than a prisoner who has just escaped, and tired of following protocol and resorting to outdated methods of law enforcement, veteran U.S. Marshals Charlie Duchamp and Ray Zancanelli are taking an unorthodox approach to their work: using former fugitives to catch fugitives.

The conflict between Damian Fontleroy and the Breakout Kings comes to a head when Damian abducts Ray's daughter.

Max Doyle was an orphan raised in the circus with an ax to grind. All his life Max has felt a lack of belonging, a feeling that was only partially assuaged by turning himself into a premiere escape artist. It's that talent that the Breakout Kings are up against as they track Max. Meanwhile, not all of the Kings are on the case, at least one stays back to follow a clue left by their nemesis Damien Fontleroy - with disastrous consequences.

Following a very clever breakout from the motor pool, the escapee takes off on a killing spree with reckless abandon until Lloyd realizes that, driven by his own fatal diagnosis, he is checking off a killing bucket list. He thinks of himself as an avenging angel, and it's up to the team to stop him and put an end to the violence.

A female prison volunteer is attacked by a rough female inmate. On the way to the court hearing that is a result of that attack, the inmate takes ill at a very precise time. The transport is forced to turn into a rest stop, where the inmate escapes. When the inmate shows up at the home of the volunteer and stabs her husband it appears tragic, until it's learned the volunteer and inmate had been working together. The Breakout Kings are in hot pursuit of this "Thelma and Louise-like" duo as they make a run for it.

Travis Muncey, actor and stool pigeon, escapes from prison. The Breakout Kings quickly find and snatch him back, only to discover that Travis is the key to capturing an even bigger fish. Things get serious when one of the team is kidnapped, and no holds are barred to make the team whole again.

Ex-Navy SEAL Jonah Whitman makes a gruesome escape from prison. His mental health is in question and he’s considered to be armed and extremely dangerous. Rather than run, though, Jonah proceeds to exact revenge from his former employers at ALASTOR, a government contractor that sets conspiracy theorists buzzing. The Breakout Kings track Jonah and attempt to bring him in, while uncovering the truth behind his paranoia.

Theodore 'T-Bag' Bagwell, a sociopath with a prosthetic hand and a mean streak to go with it, makes a bloody escape from prison and sets out on a path of vengeance.

The Breakout Kings are back on the job, charged with answering the perplexing question: Why does a convict escape from prison without ever leaving the prison? To commit the perfect crime. How does he do it? That's up to the team to find out.

The team tries to catch a ruthless woman convicted of murdering her husband by stabbing him 48 times, who escaped from prison on a school bus. It turns out the woman was tricking men into thinking she really cared for them so they would do what she wanted and help her escape. Charlie and Ray's special task force must catch her before she hurts more people -- and also make sure her 14-year-old son stays safe. Meanwhile, Lloyd's gambling debt increases and a scary Born Again inmate threatens his life if he doesn't come up with the money right away.

Joe, a convicted pedophile, disguises himself as a crewmember on a film shoot and makes a break for it. The team must not only catch him, but must be sure he doesn't commit any more crimes while on the loose. Their first lead sends them to the school where Joe worked as a counselor and where the six children are who he as accused of molesting. They also manage to track down Joe's estranged wife and children, whose lives have been seemingly destroyed by Joe's life-sentence in prison. Meanwhile, Erica is determined to see her six-year-old daughter on her birthday and Charlie's wife urges him to take her on a much-needed vacation.

In the second-season opener, the team hunt a merciless serial killer whom Lloyd's testimony helped convict. Meanwhile, Charlie gets offered a promotion, putting the fate of the program in jeopardy.

Carmen Vega, the ruthless queen pin of a drug cartel, pulls off a violent and deadly escape while attending the funeral of her slain son. Her plan, get the family business back in order and hand over the keys to the kingdom to the heir apparent, her son Cesar. Carmen will stop at nothing, including killing a member of her team and even her own family, to put Cesar on the throne. The Breakout Kings seem to be one step behind Carmen at every turn and they smell a rat. Is there an informant within the team? Not only do the Breakout Kings need to catch Carmen to their month off, they also need Carmen to give up the location of where Shea’s girlfriend is being held hostage to save her life. Find the rat, catch Carmen and save a loved one, the Breakout Kings have their work cut out for them. In the end, they realize they really are a team and there’s no going back.

A shocking scene at a prison erupts when an 18 wheeler crashes into the prison wall and an armored car escapes from the back of the truck, with several convicted felons hiding inside. Our rag-tag team is quick to begin the hunt for the fugitives and they learn the escapees are being lead by Ronald Barnes, a Madoff-like man who is hated by all. The follow Barnes’ trail and eventually realize that his plans of helping his fellow cons reach freedom along with him were all a ruse to distract the authorities from tracking down Barnes himself. Barnes will kill anyone that gets in his way and the Breakout Kings must outsmart him before it’s too late.

An escaped convict is out to bring down the prison system, all the pillars of organized government that he detests, and even a member of the team assigned to bring him to justice; Lloyd faces some difficult questions about where he came from.

A gang of vicious criminals escape prison via an underground tunnel. The Breakout Kings find themselves cooperating with the FBI after learning one of the gang members is actually an undercover agent. When it starts to look like the undercover agent may have been turned, the pressure is on for the Kings to hunt them down and discover the truth. All the while, the team must struggle with the loss of one of their own.

A convict on cleanup duty is harassed day after day by one of the guards--until the day he can't take it anymore. The convict kills the guard and escapes to go find the love of his life. He loves her so much in fact, that he killed her abusive stepfather. That's how he ended up in prison. The girl, our Juliet, has led Romeo to believe that she is waiting for him and loves him eternally. However, believing him to be serving a lifelong prison sentence, she has moved on and has loved him in name only, so to speak. Enraged, Romeo kidnaps Juliet. It's up the Breakout Kings to save them both.

A violent schizophrenic with the skills of an outdoor survivalist and a history of ritualistic killing is off his meds and on the hunt. His prey, Debbie Myers, is a beautiful, young television host. After killing an orderly, he escapes and the one thing on his mind is finding Debbie, taking her to a special place in the Adirondack Mountains and consummating their “love” through a bizarre and violent ceremony which will surely end up with Debbie being killed.

A handsome, rich, and cunning jewel thief, Andre, escapes from prison leaving all the prison guards scratching their heads and he breaks out just in time to make the biggest score of his career. It’s up to the Breakout Kings to track him down and figure out just what he’s been plotting and stop him before its too late. Meanwhile, Shea and Erica plead with Ray to allow them to have conjugal visits.

Xavier Price escapes from prison in the midst of a candlelight vigil outside the penitentiary. The Breakout Kings are immediately brought on the case to try and track him down. It turns out this violent criminal is a "collector," and has a history of kidnapping women, torturing them, and holding them captive in basements. Once the team learns he currently has a woman hidden away somewhere, the race is on to the find her before Virgil can harm her.

The race is on for the team to catch a modern-day Bonnie and Clyde after a cop is killed during a crime and killing spree following their escape: if the law enforcement agencies catch them first the Kings don't get a reduction in their sentences. Meanwhile, Julianne thinks about getting romantic with one of the Kings.

A notorious contract killer escapes from the prison to carry out some unfinished business. As he is offing people left and right, the Breakout Kings must try to figure out the connection between his victims, catch him and lock him back up before he can kill again. The common thread between all of his victims was involvement in a tragic story involving the rape of a young female college student 5 years earlier, who’s father happens to be a guard at the prison from where he escaped.

When convicted murderer August Tillman escapes from prison, Veteran U.S. Marshals Charlie DuChamp and Ray Zancanelli decide to take an unorthodox approach to fugitive apprehension by forming a special task force comprised of the three most elusive fugitives they have ever captured. Convicts Lloyd Lowery, Philomena Rotchcliffer and Shea Daniels agree to assist in the case in exchange for time off their sentences.

An oversized inmate is poisoned and his coffin is used as a “Trojan Horse” for two inmates to escape the Cayuga Correctional Facility. One prisoner, out for revenge, brutally murders a prison guard, causing friction with the other prisoner, who only wants a big payday and to live in luxury. The murder also increases the urgency to catch the cons. Meanwhile, Ray dangles a tantalizing carrot in front of the team: between Erica, Shea, and Lloyd, whoever proves to be the most useful on this case will be the proud recipient of a tasty steak dinner.