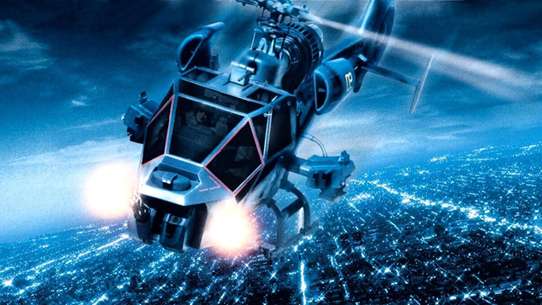 The BEST episodes of Blue Thunder

Based on the action-packed blockbuster film of the same name, BLUE THUNDER stars James Farentino ('Police Story'), Dana Carvey ('Saturday Night Live') and NFL greats Dick Butkus and Bubba Smith, dishing out their own brand of justice. The high-tech, turbo-speed aircraft known as the Blue Thunder was created by the federal goverment as the ultimate weapon in the war on crime. It can see through walls, record a whisper or even level an entire city block in seconds. When terror rains down, Blue Thunder will always follow.

#1 - A Clear and Present Danger

A paramilitary group who call themselves the ""Posse Magistratus"", have been the prime suspects for a series of bank robberies, and one particulary involving a heavily-modified World War II fighter plane. In order to track down this plane and stop the whole game, Chaney and Wonderlove attempt to track it down, based on various aerial police sightings. When accomplishing this, Chaney spots gun mounts on a plane that they performed an unauthorised thermograph upon, and results in not in the state of valid evidence to charge the Sheriff who owns it for the state-threatening operations. However that same day, the same World War II figher plane attacks them, and ends up being shot down by Chaney in Blue Thunder. To posess reliable and sufficent evidence to charge the ''Posse Magistrates'' of the crimes they have took out, Ski goes undercover as a mechanic, but it isn't long until Chaney and Wonderlove discover that the group plan to kill one of the cities' main councilmen at the Queen Mary s

Aggie Mills, an former flame of Chaney's who he knew back in the Vietnam War, comes for help via the FBI to distort a much-growing drugs & gun smuggling ring, extending to more places than just Los Angeles. When the first operation is not a success, and turns out to be a smokescreen, Bubba and Ski are assigned to go undercover as truck mechanics, but they also accidentally discover that Aggie Mills is not all what she says she is, and happens to be associating with the man in-charge of the whole operation, Harold Longstreet. When Bubba and Ski are caught red-handed while placing a radar receiver on one of the trucks, in order for Chaney and Braddock to know where the drugs and the weapons are being ferried from, its a race against time for Chaney and Wonderlove to save their two crew members, and prevent Longstreet and Mills from getting away, unconvicted.

In this ""Pilot"" episode of the ABC half season spin-off of the original 1983 blockbuster smash hit under the same name starring Roy Scheider, Warren Oates and Malcolm McDowell, The Blue Thunder Unit take on a ruthless pilot who has been recently aerially assassinating police helicopter units over Los Angeles. In an attempt to settle an old long-lasting score with Frank Chaney, the pilot and leader of The Blue Thunder Unit, the crazed comedian who calls himself ""P.V.C."" contacts Chaney, Braddock and the rest of the team and warns Chaney personally that he is going to blow him out of the sky for what he did a year ago when he destroyed his aircraft with a 12-gauge shotgun during an unsuccessful drug bust while he was a police officer, plus to make sure that he succeeds in transporting a scheduled shipment of drugs over the Mexican border. Still continuing to wipe out airborne police units when very cannily evacuating the entire Astro-Division Building, and with the acknowledge of how the

The Blue Thunder team journeys to a small Caribbean island to prevent American mercenaries, who have been hired by the KGB, from killing the Prime Minister

Madame Eva Parada, the president of Sumora, is inviting major U.S. business corporations to set-up branchs in her country, by signing lease agreements, however a small rebel group, who call themselves ""The Revolutionary Forces of Sumora"", are not tolerating this happening. When providing ground and aerial security at the Sumoran Embassy, where a guest reception is underway, Blue Thunder is decoyed by an supposedly out-of-control civilian plane, while Bubba and Ski do not notice the ""gorgeous"" woman who offered them sky-diving lessons at an airshow, Gretchen Terrell, sky-diving herself discretely onto the Embassy premises and planting explosives around the perimeter. These do cause heavy damage, but do not scare away the major corporations and Madame Eva Parada from continuing their negotiations, even though The Revolutionary Forces gave them a highly threatening warning. Although Captain Braddock is completely annoyed at how the ""most sophisticated surveillance unit in the world"" manag

An F-86 Sabre jet is stolen from an airfield by a group of KGB mercenaries, followed by an intense but unsuccessful chase by security personnel. The subsequent day, FBI agent Bruce Walsh informs Captain Braddock, Chaney and the Blue Thunder crew to participate immmediately in an in-depth search for the lost jet fighter, which with the proper treatment could be converted into a lethal weapon which could not be recovered by the government. Chaney is dis-satisifed with Walsh not providing substantial information regarding the hi-jack but Walsh covers his own with the excuse of Apex having their full acceptance with the FBI on this case. Throughtout the assignment, Chaney soon starts to develop a very romantic and cosy relationship with Walsh's assistant, Kate Cunningham, who unforuntely later on is killed just before she arrives at Chaney's house and mumbles the words ""K.G.B."". The search turns into an evenmore vengeful one, but when revealing the location of the Sabre jet, Blue Thunder i

The witness, also his confidental secretary, who could put her employer, corrupted financier Richard J. Lassiter behind solid steel bars is rescued by the Blue Thunder unit from an estate where her kidnappers were previously holding her hostage, until Lassiter's court-trial was finished. He has been sentenced for 25 years for fraud, extortion and imtimidation, and is scheduled to be transferred to Greenlake Penitentiary, a medium-security facility, located in the Central part of the state. Complaining of a gut instinct that Lassister will have his associates prepared to rescue him from lifetime imprisonment while being transferred in a police motorcade, Braddock warns Chaney not to go anyway near the transportation, however he does so. If he hadn't, then Lassiter would have got away scot free, thanks to a truck parked in the middle of the routed road with heavy automatic weapons, which is blown away by Blue Thunder's 20mm 6-barrel Vulcan electric cannon. Now in prison, Lassiter already

A pair of professional killers, disguised as highway patrol officers, and organised crime connected, perform an unsuccessful attempt on the life of Lisa Ritchie at an exclusive restaurant, located near Farrow Beach of the Pacific Coast Highway. When tailing a man who could be linked to the shooting, Chaney and Wonderlove uncover a conspiracy between two members of the International Carrier's Union; Carl Suhonen, a suspected organised crime hitman, and the Union's President, Jake Cusak. What they want, lies in the secret being conceived by their target, Lisa Ritchie, granddaughter of the late organised crime's top man, Joseph Ritchie. Before he died, he told her where the records of all his organised crime dealings, happenings and secrets are, and until the men who are after her back off, she is being protected at her grandfather's exceedingly expensive hillside mansion, where numerous Federal Agents are body guarding her, whom have requested to assign the Blue Thunder Unit to them for

The Space Shuttle Argo, privately funded and arranged without any governmental interference, becomes under threat by a group of weapon dealers who don't want their sales of bacterial weapons falling down heavily because of this. This is because, the shuttle has successfully performed an gene-splicing experiment in outer space, relieving the American Space Industry after it is set for the shuttle to re-enter orbit, but there is one slight problem. The experimental canister has to be transported from the moment the shuttle touches down, to an unknown designated laboratory, where it will be configured and analysed to affect the usage of bacterial weaponry, in 20 minutes. Only Blue Thunder has the speed capabilities to achieve this, and so Apex lends the unit to them. After a accident involving the helicopter's entire electronics being short-circuited by power lines at a nearby power plant where the team managed to apprehend two men linked to the trading of German Warfare products, Profess