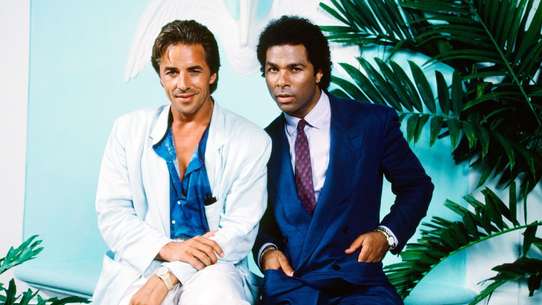 The BEST episodes of Miami Vice

Every episode of Miami Vice ever, ranked from best to worst by thousands of votes from fans of the show. The best episodes of Miami Vice!

Miami Vice centers around the unlikely partnership of Sonny Crockett (Don Johnson) and Ricardo Tubbs (Philip Michael Thomas), two undercover detectives from the Miami Police Department’s vice squad battling against drug trafficking and prostitution in the city’s seamy underworld. Its use of New Wave music and colorful Italian men’s fashion was groundbreaking and the series had a defining influence on the popular culture of the 1980s.

A concussion leaves Crockett thinking he is his drug dealer alter-ego Burnett and goes to work for a Colombian crime boss.

A murder case that hits close to home reunites Crockett with the man who used him to trick his way off Death Row.

The return of a kingpin's financial wizard son sets off speculations in the Miami underworld.

Crockett & Tubbs embark on what they see as a suicide mission. They are recruited by a Special Drug Taskforce to escort the corrupt dictator of Costa Morada, a fictional Revolution ravaged Latin American country. Gen. Manuel Borbon has promised to reveal the members of the most powerful South American drug cartel. Crockett & Tubbs are faced with what might be their final showdown.

In the midst of working an undercover assignment, Crockett and Tubbs come across a clandestine vigilante group of frustrated law enforcement officers working within the department. Aware of Sonny and Rico's own frustration with how easily the bad guys seem to circumvent the law, the vigilante organization offers them an opportunity to join in. Lieutenant Castillo encourages them to accept the offer and work undercover in ferreting out the identities of everyone involved and to make sure that no one gets hurt. Unfortunately, that is too tall an order for his detectives to accomplish successfully.

Crockett & Tubbs help an NYPD detective retrieve a stolen 15th century Madonna statue in the possession of a mob family.

Crockett & Tubbs reluctantly comply with an FBI request to guard their key witness in a drug overlord's trial.

Holocaust survivors are being murdered in Miami. Crockett and Switek infiltrate a White-supremacist group that might be responsible.

As now drug-lord Crockett's memory returns, Tubbs feels his partner has gone bad and must be destroyed.

Ordered to take time off, Crockett's vacation is cut short when he is kidnapped by 3 homicidal prison escapees.

Crockett agonizes about shooting a child during a weapons investigation.

While undercover, Tubbs falls for the widow of a slain drug kingpin. Crockett must leave to help his son deal with the pregnancy of his remarried mother.

The irresponsible son of a fierce, anti-drug-minded Congresswoman jeopardizes his mother's political career when he incurs the wrath of a British drug lord by stealing his shipment of drugs.

Still thinking he is really Sonny Burnett, Crockett starts a war between the crime family he has joined and a rival clan.

Zito reluctantly uses a boxer as bait to help the vice squad nail a former drug kingpin involved in bookmaking; it ends in tragedy and the loss of a comrade for the vice cops.

Castillo grapples with emotions while protecting his ex-wife from a drug kingpin trying to kill her current husband.

Efforts to convict a drug dealer who murdered a deputy DA are hampered by a lack of evidence and by a defense attorney disliked by Crockett.

Crockett and Tubbs question the sanity of a retired vice cop who wants them to chase after a coke dealer thought to be dead.

Crockett's romantic entanglement with a heroin-addicted doctor jeopardizes his case against a dealer.

Crockett & Tubbs seek a murder witness, unaware that she works for a madame who is Sonny's lover.

When a string of murders is linked to another unit, Crockett & Tubbs believe an undercover officer may be the killer.

Switek sinks into drinking and gambling when thugs convince him to talk a friend's son, a major college quarterback, into throwing a game.

Tubbs searches desperately for the source of information leaks about future busts.

After crime boss Al Lombard is subpeonaed to testify against the Family, Crockett & Tubbs are assigned to provide his protective custody.

Miami Vice Squad detective James 'Sonny' Crockett has just lost his partner, Eddie Rivera, in a car bombing. Crockett was investigating Esteban Calderone, a Colombian cocaine dealer, when he meets a New York City narcotics detective, Rafael Tubbs. Since they are having difficulties approaching Calderone, Crockett and Tubbs are forced to work together. Crockett later confronts "Rafael" and discovers that he is actually Ricardo, Rafael's younger brother and a New York detective, who is seeking revenge on Calderone for killing his brother. They agree to work together and Calderone is collared, but he pays $2 million bail and escapes. In the end, Crockett persuades Tubbs to enter a career in "Southern law enforcement." NOTE: This was originally a two-hour pilot movie, but in syndication it is shown as two separate episodes.