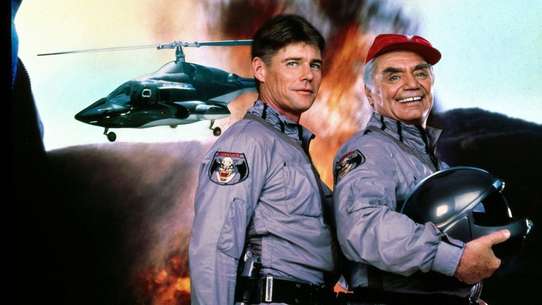 The BEST episodes of Airwolf

Every episode of Airwolf ever, ranked from best to worst by thousands of votes from fans of the show. The best episodes of Airwolf!

'Airwolf' followed the adventures of a hi-tech helicopter and its reclusive pilot, Stringfellow Hawke. Airwolf itself was a hi-tech attack helicopter, equipped with cutting-edge on-board computer, surveillance and radar systems.

String receives information that St. John is being held in a POW camp, but by the time a rescue operations put into effect St. John has been moved.

A man who once failed to steal Airwolf is given a second chance when a young lady he knows stumbles upon its hiding place.

Hawke is at a friend's prestigious ceremony when Archangel pulls him out and accuses him of being involved in a robbery the previous night in which items that could be used by Airwolf were stolen by thieves in a helicopter matching the Santini Air chopper. But Archangel is suspended by the Firm, who've built a new model of Airwolf – Airwolf II, called 'Redwolf', and piloted by Harlan "Tex" Jenkins, who worked on the original Airwolf project and has always insisted that he, not Dr. Moffett, was the true creator. But things backfire for the Firm when Jenkins steals Airwolf II - and before he hands it over to the foreign agents he's in league with, he plans a showdown with his old rival – Stringfellow Hawke; a duel that brings Airwolf vs. Airwolf...

Dominic introduces Hawke and Caitlin to an old friend, Big Cec – the owner of an oil drilling company in the desert, and his son Little Cec, who works at the company. But they find themselves walking into the middle of a feud that has emerged between the two since the death of Big Cec's wife. With Dom staying with the pair for a few days, he is shocked to learn that Little Cec was thrown out of college for selling marijuana, and is even more concerned when he discovers that he now is being forced by a head of the oil company to make drug runs in part of a drug smuggling operation. Dom sets about trying to put things right, but it is no easy task going against the ruthless drug runners...

At a National Air Race show, Hawke and Dominic befriend an attractive pilot racer, unaware that she's being pursued by her boss and his henchmen after stealing some tapes that can prove that a new combat jet is too unstable to be flown – something that her boss is determined to cover up at any cost...

Archangel warns String about a zealous government bureaucrat named D.G. Bogard who will stop at nothing until he finds Airwolf. Dom and Hawke take time out from shooting a military training film to hide Airwolf in a different location before it can be discovered, but Bogard catches on to their ruse and tracks Hawke back to the new hideaway. To complicate things, an eager pilot tails Dom and Hawke in an effort to convince Santini that she deserves a job working for his company.

After Tess Dixon, the wife of infamous crime-lord Cullen Dixon, escapes his bodyguards while swimming in the sea at night, Archangel asks Hawke and Santini to deliver her safely via Airwolf to a top-secret location, where she will testify against a cartel of corrupt businessmen who are plotting to assassinate high-ranking officials in Washington. Tess is an old flame of Hawke's, something which makes him very reluctant to accept the mission, before he finally agrees, but they come under continual attack as Cullen Dixon's men aim to see that Tess never makes it to testify...

When new hi-tech attack chopper HX1 is stolen by an elite group of mercenaries, the tactics used fits those that Hawke's MIA brother St. John was trained in, and Hawke is certain that his brother may somehow be involved. Dominic begs him to leave well alone, but Hawke is adamant, and with Archangel insisting that if it cant be retrieved, the Firm will blow HX1 and anyone flying it out of the sky, Hawke goes back into his past and some of the people he knows from it, to desperately try and get a lead on the group and mercenaries and possibly St. John... But the HX1 is so powerful, it may even be able to blow Airwolf out of the sky...

String is aided in the rescue of a kidnapped industrial designer by the man's retarded son.

The Airwolf crew decides to help a group of Vietnamese farmers get their crop to market, after a warlord threatens their lives.

String must add Caitlin to the Airwolf crew, in order to rescue Archangel from behind enemy lines.

While filming aerial footage, String and Dom accidentally get footage of a mobster believed dead.

A pilot who escaped from terrorists who stole an experimental aircraft guidance computer leads the Airwolf team to the remote community where the terrorists are holed up.

Eddie, a friend of Dominic's, was once a pilot until a air crash in which his passengers were killed, causing him to lose his nerve and turn to drink as a result. Living alone in his trailer in the desert, Eddie's alcohol problem has recently become even worse after supposedly seeing lights in the sky in the middle of the night. Though trying to help his friend, Dominic is as skeptical as everyone else, blaming the sightings on Eddie's drunken state, until one night he sees the lights too... The next morning, Hawke arrives to find that the pair of them have vanished, and in searching for them, stumbles upon a fanatical militarist's organization, who is planning to launch his own nuclear missile against Russia...

When a professional group of thieves steal a batch of thermonuclear detonators, which can cause mass destruction if they fall into the wrong hands, Archangel has reason to suspect that the robbery was an inside job, and sends Hawke and Santini to use Airwolf to track down the detonators before they can be used by the criminals. Meanwhile, while Hawke and Dom are busy tracking down the detonators, a man arrives at Santini Air asking Caitlin to give him flying lessons, and soon strikes up a romance with her – but unbeknown to her, he is actually an ex-F.I.R.M. employee who was the inside man on the robbery, and now plans to use her in a trap to get his hands on Airwolf, which he intends to use to fly the detonators out of the country with...

String is captured by Latin American revolutionaries while attempting to rescue American archaeological students trapped by a coup.

When "The Mongoose", a new laser weapon, is stolen, the thieves fall out, and one of them contacts The F.I.R.M. with hope of returning the weapon for reward. Archangel sends Hawke, with Dominic and Caitlin, to work undercover as stunt men at a travelling Wild West show where the man is hiding out, but when their contact is killed in a suspicious "accident", it's up to them to find out the whereabouts of the weapon for themselves before the thieves can sell it to foreign agents...

String falls for the Czech woman scientist, whom he's helping defect to the west.

Dom inherits from the estate of a millionaire whom he had earlier rescued from a plane crash.

The families of one of String's friends from Vietnam are kidnapped along with Dom and Caitlin by people seeking revenge against those who destroyed their village during the Vietnam conflict.

Hawke takes a seemingly luxurious Santini Air job, piloting and accompanying a beautiful, high-flying business woman for a few days, but ends up duped into being hypnotised in an elaborate plot by master criminal John Bradford Horn. Horn has desire to take over a small country as his own, and intends to have the hypnotised Hawke deliver Airwolf to him so he can use the chopper's fierce fire-power to succeed in his goal...

After being forced down by a volcano eruption, String and Dom discover a mining town being run as a slave colony.

Dr. Robert Winchester is a brilliant researcher and a former test pilot who helped design Airwolf. Now, he's asking for Hawke's help in test flying a simulator that he's designed to enable the Firm to train future test pilots to fly Airwolf. Reluctantly, Hawke agrees, but determines that the simulator's "feel" is a little off. Archangel convinces Hawke to let Winchester hook up the real Airwolf to his computers in order to get a more realistic demonstration. This allows Winchester to engage in a little friendly flying competition with Hawke but it also allows the Russians to nearly get their hands on the high tech super copter.

Caitlin is a passenger on board a plane which Airwolf is sent to search for after the plane is hijacked and forced down at sea.

While demonstrating the capabilities of the new prototype supercopter codenamed 'Airwolf', Dr. Charles Moffet goes rogue, steals the chopper and kills almost all of the observers. At least one man -- Michael Coldsmith Briggs III survives. Briggs, codenamed 'Archangel' is the head of a covert organization called 'The Firm' and Archangel calls upon the one man in the world he knows that can retrieve the copter. The problem is Stringfellow Hawke is not only a loner, but a recluse as well. The amount of money the Firm is willing to pay for Airwolf's recovery is irrelevant. Hawke wants just one thing - the safe return of his brother, Saint John, who was captured during the Vietnam war and is evidently a POW.