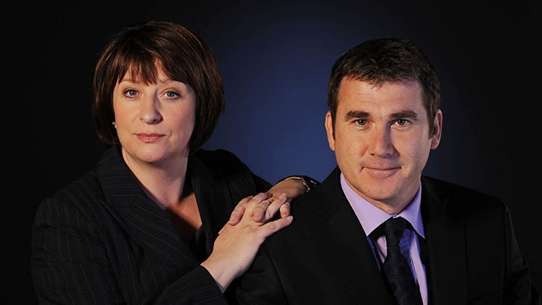 Caroline Quentin (Men Behaving Badly) stars as DCI Janine Lewis in the hit UK police drama Blue Murder. Staring along side her are Ian Kelsey (Casualty), David Schofield (Our Friends in the North) and Nick Murchie.

Second of a two-part story. Janine desperately tries to sort things out with her son Tom whilst heading up this tough murder enquiry. With Shap's protection of a murder suspect now exposed, the team face a race against time to find the real killer.

When a cheerleading coach is found brutally murdered, suspicion soon falls on her husband, but further investigation by DCI Lewis and the team uncovers a bitter family rivalry and a shocking affair. Janine struggles to cope at home following the departure of her ex-husband, Pete.

A talented young footballer is found stabbed to death after celebrating his nineteenth birthday. DCI Lewis and the team consider whether the attack was motivated by racial hatred, jealousy or revenge.

A sergeant is found brutally assaulted and murdered at an army barracks. The team is called in to investigate, and uncover resentments and inappropriate relationships at the camp. Janine, meanwhile, is charmed by a major with the Special Investigation Branch.

DCI Lewis leads an investigation into the murder of a private investigator. The team investigate the detective agency and discover that the dead man had been working on behalf of a convicted criminal, but DS Shap appears to be pursuing his own agenda. Janine takes some time off work to deal with Tom, who has been playing truant.

A popular G.P. is shot dead and one of his younger colleagues disappears. The murder is linked to a series of thefts from surgeries, but investigations into the dead man's personal life reveal a number of motives for murder.

What first looks like a straightforward suicide case soon turns much more sinister. At the funeral of the suicide victim, Charlotte Moran, her father, Frank Evans, and her husband, Dave Moran are grieving for her. Meanwhile, behind the scenes at the crematorium, John Wheeler also weeps as he prepares Charlotte's coffin for the cremator, when her husband, Dave, angrily confronts him. Two weeks later, the crematorium secretary, Mary Hunt, reports that both Dave Moran and John Wheeler have gone missing. Rumour has it that John Wheeler and Charlotte Moran were having an affair. Janine opens an investigation and forensic tests reveal that another body was cremated with Charlotte. But was it Dave Moran or John Wheeler? Janine tells the team they have a murderer and a victim, but which is which?

DCI Janine Lewis and her team continue their investigation into the murder of a schoolteacher.

A diver discovers the remains of a career criminal reported missing two years earlier. A group of friends who used to fish together in the same area have been dying in suspicious circumstances.

When the only witness to a woman's murder is an autistic boy who cannot communicate what he saw, Janine has to get to the truth another way.

DCI Lewis and the team deal with the murder of a veterinary surgeon and discover that the victim had been planning to leave her husband for her lover, but the investigation leads to the uncovering of some difficult relationships within the tight-knit farming community. DS Butchers has a difficult appraisal with DI Mayne.

The lead vocalist of a rock band is found murdered ahead of the release of the band's latest album. DCI Lewis and the team discover that the deceased had been a difficult person and made a number of enemies. Ellie, a fan of the band, takes a great interest in the investigation.

DI Mayne goes under cover as a prisoner to investigate the suspicious death of an inmate who had been awaiting the outcome of an appeal against a murder conviction. He soon discovers that several inmates have a connection with the original murder victim. Janine frets when Michael is arrested following a car crash.

PC Eddie Carter attends to a teenage girl who is knocked down and killed by a car speeding from the scene of a jewellery robbery. Carter is preparing to take the getaway driver to the station to make a statement when he is shot and killed. DCI Janice Lewis and her team investigate.

A three-year-old boy has been missing for a week when a child's body is found. The boy's family comes under suspicion, but DNA tests establish that the body is not that of the missing boy.

On the way back to school for the first time after her maternity leave, Janine witnesses a hit and run outside her son's school. While wishing to investigate, she is at the same time summoned to view a corpse found in the river. A public appeal reveals the woman to probably be Rosa Milicz, who worked at Topcat, a lap-dancing club. Meanwhile the little girl involved in the hit-and-run dies. Richard and Shap go to Topcat where they discover that the manager of the club is James Harper, who coincidentally also owns the hit and run car.

Alan Hickson strangles his wife, Paula, with a dog chain after she drowns his dog in the garden pond, and is sentenced to three years in prison. He is released after having only served 18 months, but he is soon found dead - having been strangled with a dog chain.

Janine Lewis, mother of three and pregnant with her fourth child, is promoted to Detective Chief Inspector. Coming home to celebrate, she catches her husband pleasuring the au pair. Newly single, she struggles to balance her demanding new job with a hectic home life. Lewis and her team investigate the murder of a schoolteacher found at his garden allotment, sliced open like a lab rat.

A popular Mullah dies in a house fire and all the evidence points to a local politician. Janine thinks there's more to it, but nobody in the Muslim community will talk to her.