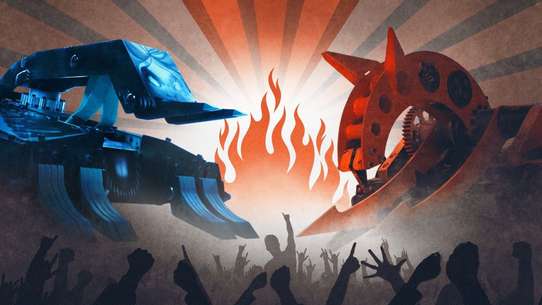 The BEST episodes of BattleBots (2015)

BattleBots promises to wow viewers with next generation robots—bigger, faster and stronger than ever before. The show will focus on the design and build of each robot, the bot builder backstories, their intense pursuit of the championship and the spectacle of the event.

After a dramatic season of robot warfare, eight of the greatest bots in the world face off to stake their claim in becoming the 2019 BattleBots World Champion and take home the Giant Nut.

In the fight capital of the world, a new tournament kicks off for robotic combat's hottest trophy: The Golden Bolt. But first the robots must face the toughest battle ever seen in Vegas: the Sin City Slugfest. Starring: Gigabyte.

After the ferocious Sin City Slugfest, the 5 new Champions join 3 Giant Nut winners for one night of carnage in the BattleBox. At stake is BattleBots’ newest trophy: The Golden Bolt.

The BattleBots World Championship Tournament reaches its climax as the remaining eight bots battle to hoist The Giant Nut. Who will be crowned champion of the world?

#5 - The Tournament Quarter Finals (I)

This episode brings you all the action from the left side of the Bracket down to the Quarter Finals!

This episode brings you all the action from the right side of the Bracket down to the Quarter Finals!

Reigning BattleBots champion Tombstone and newcomer Whiplash fight to the finish as an advanced group of bots go head-to-head in the BattleBox.

Just 16 bots remain in the World Championship - now it's a fight to the death. The march towards The Giant Nut rages on as the final 16 bots fight for survival! The best of the best are left, but only 8 will survive tonight to face the ultimate conflict.

Minotaur continues its quest for the BattleBots title in an epic fight with Blacksmith, a rematch two years in the making.

#10 - Battle of the Undefeated

Sparks are flying at the midpoint of the season as Valkyrie and Rotator square off in a battle of hard-hitting horizontal spinners. Undefeated bots Malice and MadCatter duke it out and Uppercut takes on bad-bot Sawblaze in an explosive main event.

Elite bots Tombstone and Sawblaze go to war in the BattleBox, as the competition heats up to become the 2019 BattleBots champion.

The 2019 BattleBots World Championship kicks off an epic Sweet 16 competition, as the deadliest bots across the globe battle it out for the ultimate prize.

The 2018 season of BattleBots concludes with the World Championship Semi-Finals, Finals and awarding of the Giant Nut!

Eight hopefuls slug it out to the death for the right to take on Rotator. The winner will compete for the exclusive Golden Bolt. Will Rotator live up to its reputation or will another bot triumph and join the group of champions?

The epic robot-fighting series BattleBots is making its triumphant return with all-new episodes on Discovery Channel and Science Channel. BattleBots features the biggest, baddest, strongest, and fastest next-generation robots from all over the world as they duke it out for supremacy in the rapidly exploding world of Robot Combat Sports. Fight card: Blacksmith vs. Bite Force, Mecha Rampage vs. Duck! vs. Free Shipping, SubZero vs. Huge, Bombshell vs. Lock-Jaw. Main event: Tombstone vs. Minotaur.

#17 - Everyone Wants to be the Hotshot

Legends Hypershock and Biteforce face off in an epic showdown, while up-and-comers try to prove they have what it takes to be crowned 2018 BattleBots World Champion. Fight card: Overhaul vs. SawBlaze, Whiplash vs. Hypothermia, The Four Horsemen vs. Double Jeopardy vs. Gamma 9, War Hawk vs. Axe Backwards. Main event: Hypershock vs. Bite Force.

Hard-hitting, steel-splitting combat returns as 60 teams converge for a tournament of all-out robotic carnage! Jack Barker from End Game finally gets the match he's been waiting for as he squares off with Ray Billings and his lethal bot Tombstone.

#19 - One Shining Bot: The Championship

On the night of champions, 2 semifinal matches start things off, followed by a 3-team rumble, and then the championship fight. Who will win the Giant Nut?

Eight bots on the brink go head-to-head in the last-chance Desperado tournament, and in one insane night, fighters on the edge of elimination take one final shot at redemption.

Minotaur goes head-to-head with Subzero in an ultimate smackdown as the two bots try and secure their spots in the World Championship.

Competition gets fierce as the teams set their sights on making it into the top 16, and when defending champ Bite Force takes on legendary flipper Bronco, top teams are pushed to the brink.

The stakes get higher when teams on the brink start to feel the heat, and as the clash continues, undefeated bots Son of Whyachi and the Ewerts look to continue their reign of terror.