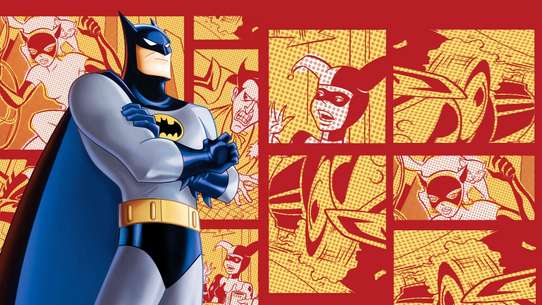 The BEST episodes of Batman: The Animated Series

The Dark Knight battles crime in Gotham City with occasional help from Robin and Batgirl.

Robin sets out to find Tony Zucco, all the while plagued by the memories of his parents' death and how Bruce took him in as his own son. Eventually, Batman finds Zucco at an old amusement park, but breaks his leg during the fight. Robin arrives, and prepares to kill Zucco in revenge. He initially scoffs Batman's advice, but realises that justice and revenge are not the same. Zucco is arrested, and Batman makes amends with Robin, stating that he wouldn't let Robin accompany him under the fear of Zucco killing him.

Bruce Wayne wakes up one morning to find that his life is completely upside-down: his parents are alive, the Batcave doesn't exist, Alfred does not remember Robin, and he is engaged to Selina Kyle. However, it doesn't mean that Batman isn't still around, and Bruce starts to wonder what has happened, especially after seeing the characteristics of a dream (such as book and newspaper prints not making sense) inside this new life.

During a fight with some gangsters at a construction yard, Batman and Robin learn the name of their boss: Billy Marin. While Robin looks forward to going up against Marin, Batman becomes distant, and after a falling out at the Batcave, Batman doesn't allow Robin to accompany him on the search for Marin. Robin investigates on the Batcomputer, and soon realises that Billy Marin is not the boss' real name. Rather, it is an alias of Tony Zucco, the man who killed his parents

When a Batman impersonator appears in Gotham City, the real Batman deduces that Karl Rossum is somehow involved and confronts the inventor. The other Batman, a duplicate, then shows up and a battle between the two takes place. After the duplicate Batman escapes, it begins its campaign to recreate H.A.R.D.A.C.'s goals of a robotic society.

Joker, Killer Croc, Penguin, Two-Face and Poison Ivy all meet at a poker table, each telling a tale of times when they almost defeated Batman. At the same time, Harley Quinn is about to kill Catwoman. Will Batman be able to save her?

Aging billionaire Grant Walker breaks Mr. Freeze out of prison so he can use the scientist's knowledge to can gain immortality and cover the world in a new ice age.

On the anniversary of the death of Bruce's parents, Batman accompanies Leslie Thompkins to Crime Alley to place roses on the spot where they were gunned down. Meanwhile, Commissioner Gordon is on stakeout to arrest James "The Jazzman" Peake during a drug smuggling ring. Batman had promised to be there, but arrives late to find a gun battle going on. He helps defeat the gangsters and arrest the Jazzman, but at a high cost—Gordon is severely wounded. The incident traumatizes Batman, and he decides to give up crime-fighting, despite the Jazzman escaping prison to carry out his personal vendetta against Gordon (who had sent him to prison six years before).

Batman's worst enemies kidnap him and put him on trial for crimes committed against them.

Now calling himself Two-Face, Dent goes on a crime spree throughout Gotham, attacking Rupert Thorne's businesses to draw the gangster out of hiding. Batman must find a way to stop his former friend before he and Thorne kill each other.

Harvey Dent, campaigning for a re-election, vows to rid Gotham of Rupert Thorne's crime and corruption. The tables turn when Thorne gets a hold of Dent's psychological records and discovers his alternate personality: the violent Big Bad Harv. Thorne attempts to blackmail Dent with this, and the following fight in Thorne's chemical plant hideout results in an explosion that scars the left side of Dent's body, despite Batman's attempts to save him.

Simon Trent, an actor best known for his past role as "The Gray Ghost", is on the verge of bankruptcy thanks to his declining career. To save himself, he sells off all of his Gray Ghost merchandise. Immediately afterwards, a series of crimes related to the old show begin to occur. Batman, having himself been inspired partly by the show to become the crimefighter he now is, goes to Trent for help, and they team up to put an end to the crimes. In this episode, the voice of Simon Trent is none other than Adam West, the man who played Batman in the 1960's version of Batman

When Commissioner Gordon is framed for taking bribes from Rupert Thorne, his daughter Barbara pleads with Batman to show up at a rally being put on in the commissioner's behalf. But when Batman disappears after finding the person behind the frame-up, Barbara takes the law into her own hands as Batgirl.

When Robin is mysteriously abducted from his college campus, the Batman begins a fruitless search ... until he is astounded by the sudden appearance in the Batcave of Ra's Al Ghul. Ra's quickly reveals that his daughter, Talia, has been abducted under circumstances similar to Robin's, suggesting that the same persons are responsible. So begins an uneasy truce between the Batman and 'The Demon'.

After freeing Talia from her father's clutches and escaping from an avalanche, Batman and Robin follow the only clue they have - the word 'Orpheus'. After discovering that 'Orpheus' is Ra's private satellite that will orbit over the Sahara, the duo travel to the Demon's desert stronghold. There, Batman learns that the satellite is actually a weapon which will explosively destroy all the Lazarus Pits simultaneously, throughout the world, destroying all the life that exists.

The Joker steals an atomic bomb and Batman and Robin must team up with Harley Quinn in order to find him.

Bitter scientist Victor Fries, as Mr. Freeze, attacks several divisions of Gothcorp, each time stealing a piece for a secret weapon he intends to build. Batman investigates the connections, and discovers that the start of Freeze's vendetta against Gothcorp was a bitter falling out between Fries and Gothcorp's CEO, Ferris Boyle, during which Boyle almost killed Fries (mutating him into Freeze) and presumably killed Fries' terminally ill wife, Nora. Batman must find a way to bring Boyle to justice before Freeze carries out his revenge.

Poison Ivy appears to have gone straight and become suburban homemaker, nevertheless Batman suspects her of a series of plant based crimes in Gotham City.

When a small time gang member seemingly kills Batman by accident, he gets involved with gangs all over Gotham, as well as the Joker and Rupert Thorne.

Several robberies take place at major companies, including Wayne Enterprises, and Bruce Wayne, as Batman, discovers the thief to be a mechanical briefcase. Bruce meets with his old friend, Karl Rossum, an expert in robotics who lost his daughter to a vehicle accident years ago. He also meets Rossum's assistant, Randa Duane, and Rossum's ultimate creation: a prototype A.I. known as Holographic Analytical Reciprocating Digital Computer (H.A.R.D.A.C.) Bruce invites Duane to dinner, and around the same time, certain civilians start acting strangely. Most surprising is when Duane unexpectedly leaves Wayne Manor while Bruce is on the phone, and the entire Batcave turns on Batman.

Batman manages to free himself from the Batcave's clutches, and brings it back under his control, although he fails to track Duane down. Barbara Gordon approaches Batman to inform him of her father's sudden change in behaviour. A brutal fight between Batman and Detective Bullock ensues, during which Batman pushes Bullock onto the Bat Signal, and reveals him to actually be an android, meaning that the real Bullock and James Gordon have gone missing, and Batman knows who the culprit is: H.A.R.D.A.C. Can he stop the evil supercomputer before it's too late?

Bruce Wayne is released from prison on bail. Hagen, as it turns out, survived the murder attempt on him, but at a high cost: the formula entered his body and soaked every single one of his cells, mutating him into a shape-shifting mutant. With his newfound powers, Hagen, now calling himself Clayface, decides to take his revenge on Daggett and his men. Can Batman bring Daggett to justice and stop Clayface before innocent people are hurt?

When the Joker fires Harley, she tries going on a crime spree of her own, joining up with Poison Ivy, and the two become Gotham's Queens of Crime, much to Joker's fury.

Roland Daggett, with the help of two explosive experts, Crocker and Nitro, plans to destroy the infamous Crime Alley (while making it look like an underground accident) and use the land to expand his business empire, even if it means killing the residents or forcing them to abandon their homes.

#25 - The Strange Secret of Bruce Wayne

After a prominent judge is injured during a struggle with some thugs demanding money from her in exchange for a strange tape, Bruce Wayne decides to take a trip to Yucca Springs, a resort where the judge had vacationed, and consult Dr. Hugo Strange, a psychiatrist. Bruce soon learns that Strange has invented a machine that extracts people's darkest secrets from their minds and transfers them to videotape—and now Strange has proof of Bruce's secret identity as Batman and plans to auction it to three of Gotham's prominent crime bosses.