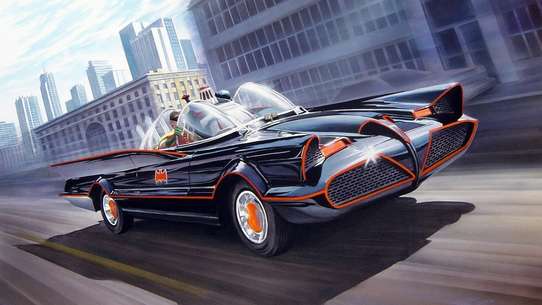 The BEST episodes of Batman

Every episode of Batman ever, ranked from best to worst by thousands of votes from fans of the show. The best episodes of Batman!

Wealthy entrepreneur Bruce Wayne and his ward Dick Grayson lead a double life: they are actually crime fighting duo Batman and Robin. A secret Batpole in the Wayne mansion leads to the Batcave, where Police Commissioner Gordon often calls with the latest emergency threatening Gotham City. Racing the the scene of the crime in the Batmobile, Batman and Robin must (with the help of their trusty Bat-utility-belt) thwart the efforts of a variety of master criminals, including The Riddler, The Joker, Catwoman, and The Penguin.

While the Riddler maneuvers Batman into being sued, the Dynamic Duo investigate the supervillain's concurrent scheme.

Catwoman makes her return known with a string of robberies. Hoping to lure her into a trap, Batman plants a news blurb giving the whereabouts of a rare canary, but Catwoman is tipped off and arrives prepared. Batman and Robin follow a lead to Catwoman’s hideout, the Pink Sandbox, but soon discover that this villain has been waiting for them.

Using resurrected scarab beetles, King Tut concocts an ancient mind control potion, abu raubu simbu tu. Chief O’Hara is the first under his spell, followed shortly by Commissioner Gordon, and when Batman himself is tricked into taking the drug, Tut’s plan to control all of Gotham City by tainting the water supply seems close to succeeding.

The Riddler fashions a mold of the face of the unconscious Robin. He contacts Batman with two more riddles. The Riddler tells Batman if he can solve the riddles, he'll know where Robin is.

Mr. Freeze is in town, and has begun a new cold wave of terror. He launches “Operation Hate Batman,” framing the Caped Crusader as taking a bribe and dressing his own henchmen as Batman and Robin. As the negative press mounts, Mr. Freeze works on his plan to turn the Dynamic Duo into human Frosty Freezies.

The Joker persuades wealthy heiress Baby Jane Towser to join him in his artistic capers. Aided by his new accomplice, the Joker easily clears out a wing of the Gotham City Museum to make room for his latest “masterpiece” – pieces of a broken table. But the laughing criminal has plans for the priceless collection of paintings that once filled the room.

#7 - A Riddle a Day Keeps the Riddler Away

King Boris, who hails from a European country, comes to Gotham City for a visit. Upon his arrival, there is a disturbance, which includes a clue from the Riddler. Batman and Robin investigate and get on the Riddler’s trail. They are trapped by the criminal, who ties them to large wheels that will spin with ever-increasing speed until they are dead.

Bruce Wayne escapes the Penguin’s deathtrap and returns to the Batcave. What he doesn’t know is that one of the Penguin’s clues, an umbrella, has a listening device.

Catwoman initiates a series of thefts that cause Commissioner Gordon to summon Batman and Robin. But the importance of the crimes go beyond the taking of the objects involved. The Dynamic Duo eventually find Catwoman’s lair. But Robin is whisked away while Batman is given a choice between two doors. If he picks the right door, he’ll find Catwoman. If he picks the wrong one, he’ll face certain doom. The hero makes the wrong selection and is about to be attacked by a tiger.

The Joker escapes from prison and begins another crime wave on Gotham City. After being foiled by Batman and Robin, thanks to Batman’s utility belt, the Joker decides to make his own utility belt. The Joker eventually traps Batman and Robin and, on live television, he intends to unmask them.

Batman agrees to let the Catwoman drug him. But he appears to have a headache and the Catwoman permits him to take an aspirin. After the drug is administered, Batman appears to assist Catwoman on her crime wave. However, the police receive anonymous telephone calls that enable them to pick up members of Catwoman’s gang, including the drugged Robin. Meanwhile, the Gotham City police try to trace the hot line to the Batcave. Batman is there with Catwoman. He uses a device that foils the trace. Eventually, Batman reveals he hadn’t taken an aspirin but his universal drug antidote that prevented the drug from working. Catwoman tries to flee on top of a warehouse near the Gotham River. Batman is in pursuit and corners her. But, unwilling to go straight, she falls into the river. Has she lost her life, or just one of her nine lives?

Batman avoids a public unmasking but is unable to bring in the Joker, thanks to the villain’s utility belt. Eventually, Batman and Robin are captured by the Joker’s gang. But the Joker doesn’t know a showdown with the Dynamic Duo awaits.

The Penguin plots to manipulate Batman into inadvertently devising capers for him.

Attempting to save Chief O’Hara from drowning inside a metal trunk, Batman and Robin find themselves under fire from the Penguin’s henchmen. Batman instructs Alfred to pose as famous forger Quill-Pen Quertch (complete with false fingerprints), but the Penguin recognizes Alfred as soon as he puts on his glasses. The evil Bird-man and his cronies then visit stately Wayne manor brandishing a giant Butler-pie.

King Tut has relapsed into his kingly ways, this time showing a marked interest in scarab beetles and apothecary potions. Robin infiltrates their hideout to discover their true intentions, relaying what he hears to Batman, but their plan is put in jeopardy when Robin’s presence is detected.

The Catwoman manages to drug Robin. The junior member of the Dynamic Duo is now the Catwoman’s mindless slave. Batman is on the trail of the sultry villain, but he’s hampered by the fact he can’t harm his partner. Eventually, Batman is trapped by the Catwoman. He’s in a giant trap and Robin is cutting the rope that will cause a giant mouse trap to snap on Batman. The Catwoman offers Batman a choice – die by Robin’s hand or agree to be subjected to the same drug.

At Woodrow Roosevelt High School, a vending machine gives out money. Dick Grayson is there to witness it. Batman learns the vending machines are operated by a company bought by the Joker after being released from prison. The Joker and his gang are aided by Susie, a cheerleader at the school. In the course of their investigation, Batman and Robin are captured and placed in electric chairs. If a “one armed bandit” comes up the wrong way, they’ll be electrocuted.

Catwoman disguises herself as a wealthy recluse – Minerva Matthews – to exchange a quarter million dollars for two Stradivarius violins. Once the instruments are safely in her hands, the villain reveals her true identity and demands the cash back. But Catwoman is surprised to learn that her business partner – Zubin Zucchini – is also not who he appears to be.

Vince, a temperamental physician at a Gotham City hospital (a takeoff on Ben Casey), saves Batman and Robin. The Dynamic Duo resume their pursuit of Mr. Freeze. Eventually, Batman substitutes himself for Paul Diamonte, a baseball player, Mr. Freeze has kidnapped. Robin, disobeying Batman’s orders to stay away, is also captured by the villain. Now, in his headquarters, Mr. Freeze is using his climate controls so that only Batman or Robin will have access to life-giving warmth.

The Catwoman “steals” the voice of a television talk-show host in the middle of an interview with Bruce Wayne. She plants clues to suggest either the Joker, Riddler or Penguin may have committed the crime. In the meantime, she has fooled Commissioner Gordon into thinking she has gone straight. She makes her first mistake when she masquerades as Miss Klutz, a dance instructor visiting Wayne Manor. Allergic to dogwood, she sneezes and gives herself away. Her next target is to “steal” the voices of British singers Chad and Jeremy. Batman and Robin eventually track her to a dance studio, where a fight erupts. After it appears the Dynamic Duo has triumphed over Catwoman’s forces, she drugs them. The heroes are placed inside a chamber where the sounds of water dripping will be magnified many, many times and drive them insane.

Catwoman goes ahead with her scheme to steal several Batagonian Cat’s Eye opals, but she has trouble finding someone to fence them since such rare stones would be easily spotted. With little recourse left, she decides to turn them in for the reward money. It seems like the perfect job for her acquaintance, Freddy the Fence. But when he notices that the gems are fakes, Catwoman realizes she has been tricked by Batman and vows to get revenge on the Caped Crusader once and for all.

After escaping the Penguin’s death trap, Batman still faces an uphill run to defeat the Penguin in the race for mayor of Gotham City. The Feathered Fiend uses every dirty trick he can think of to ruin Batman’s reputation. But the Penguin discovers opinion polls aren’t what they are cracked up to be. Still, Batman and Robin will need to subdue the villain before his plot can be put down once and for all.

After an ingenious escape, Batman and Robin again pick up the trail of the Joker. The villain’s ultimate crime is designed not only to make him rich but to ruin Batman’s reputation.

Batman and Robin escape Catwoman’s trap by hitting the precise note needed to shatter the glass chamber in which they’re prisoners. They quickly get on the trail of Catwoman. The feminine feline criminal eventually “steals” the voices of Chad and Jeremy, Commissioner Gordon and talk-show host Allen Stephens. She blackmails the British government, which faces the lost of revenue from the taxes on Chad and Jeremy’s performances. Batman and Robin eventually capture Catwoman and her gang, but not before Batman and Catwoman express obvious affection for each other.

The Guardians of Justice

Ninja Turtles: The Next Mutation