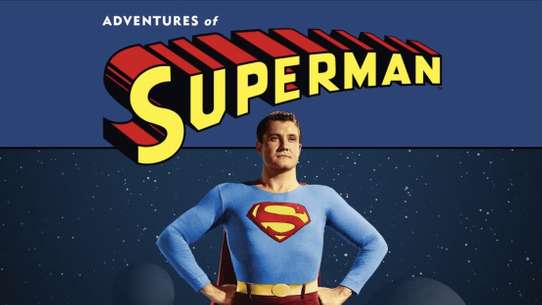 The BEST episodes of Adventures of Superman

Announcer: "The Adventures of Superman. Faster than a speeding bullet! More powerful than a locomotive! Able to leap tall buildings at a single bound!" Voices: "Look up in the sky! It's a bird! It's a plane! It's Superman!" Announcer: "Yes, it's Superman, strange visitor from another planet who came to Earth with powers and abilities far beyond those of mortal men. Superman, who can change the course of mighty rivers, bend steel in his bare hands; and who, disguised as Clark Kent, mild-mannered reporter for a great metropolitan newspaper, fights a never ending battle for truth, justice, and the American way."

#2 - The Perils of Superman

Safe from justice? A killer hides inside a bunker made of a strange material even Superman can't penetrate.

Ready, Aim...A crimelord kidnaps Lois and Jimmy, using them as bait to lure our hero into the line of fire of a Kryptonite ray gun.

#6 - The Wedding of Superman

Superman pops the question, Lois says "yes". Is it a dream come true for the smitten femme reporter?

When a crooked wrestling promoter paralyzes honest athletes, Superman steps in to reverse the damage and rescue an innocent captive.

Sound and fury. Bank robbers have a sudden interest in a young audiophile's collection of recorded sounds.

An anti-memory vapor can be useful to villains...and perhaps to Clark Kent when he needs to conceal his heroics.

Superman is implicated in the abduction of a young girl who is thought to have information concerning hidden counterfeit plates.

Clark Kent is the man on the inside, posing as an ace safecracker to get the goods on a crime ring.

It means no harm. And may bring death to Superman. A newly created robot is powered by Kryptonite.

Ladders, black cats, Friday the 13th. All harmless -- but someone intends real harm to an anti-superstition society.

Convinced the Mole Men are peaceful beings, Superman must save them from a vengeful mob determined to kill the armed visitors.

#20 - The Superman Silver Mine

The kids can wait. Crooks attempt to claim a silver mine for themselves and keep it from becoming a summer camp.

Beware of Superman! A nuclear incident leaves him glowing with radioactivity and lethal to anyone he's near.

Beat the clock: The race is on to stop an innocent Death Row inmate's date with the electric chair.

Journey with Superman from Krypton to Metropolis, as he joins that Daily Planet staff and meets the fiery Lois Lane.

Bravely testifying against a mobster, Lois Lane will die unless Clark Kent finds the weapon that will soon destroy her mind.

No dinners, no hoopla...just Kryptonite. Two thugs have their own way of celebrating Superman Week.