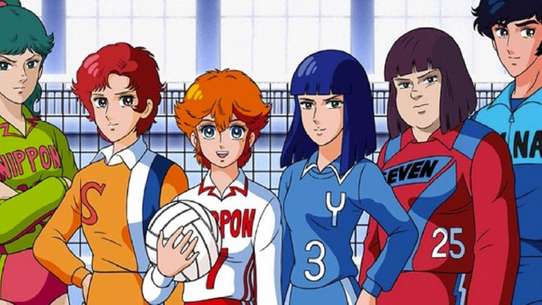 The BEST episodes of Attacker You!

Attacker You! is the story of ambitious and energetic thirteen year-old junior high schoolgirl You (pronounced Yoh) Hazuki, who moves to Tokyo from the Japanese countryside to live with her father Toshihiko, a cameraman recently returned from Peru, and attend school. You's mother is not in the picture, having left when You was very young. Also living with You and her father is her younger brother Sunny, who is very attached to his older sister and tends to follow her everywhere she goes, including to school and to her volleyball matches. However, You's father is not supportive of her volleyball playing, and You is puzzled as to why he gets so angry about it. You, who has exceptional jumping abilities, is passionate about volleyball and dreams of one day being a part of Japan's national women's volleyball team in the 1988 Seoul Olympics. She joins her school's girls' volleyball team and quickly becomes one of the top players, although Daimon, her coach, is brutal and behaves violently toward his players when they make mistakes or fail to live up to his expectations. You makes a loyal friend in the kindhearted Meiko (nicknamed "Chibi") and an instant enemy in the captain of the girls' volleyball team, Nami Hayase, a cold, arrogant girl whose entire life is volleyball and who doesn't take kindly to her bubbly new teammate. You and Nami also become rivals for the affections of Sho Takiki, the handsome, dashing captain of Hikawa's boys' volleyball team. You puts as much energy into trying to get Sho's attention as she does into her game, and even takes to attending extra training sessions coached by Sho in the morning before school just to be near him. Eventually, You and Nami form a tumultuous friendship, which comes to a head when Nami joins an opposing professional team coached by Daimon. You also befriends ace attacker Eri Takigawa, a girl from a rival team, the "Sunlight Players"; You and Eri eventually join the same professional team.