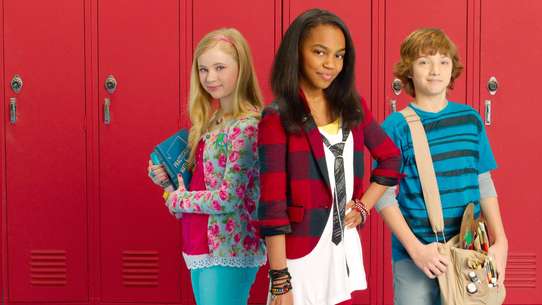 The BEST episodes of A.N.T. Farm

Every episode of A.N.T. Farm ever, ranked from best to worst by thousands of votes from fans of the show. The best episodes of A.N.T. Farm!

Chyna Parks, an 11 year old musical prodigy, gets into a gifted program called Advanced Natural Talents at the local high school. Along with her fellow elementary school-aged 'ANTs', she must navigate the halls of a new school of older kids who are not particularly fond of grade-skipping newbies.

Webster High is completely deserted due to the teachers getting food poisoning from the cafeteria. The ANT's are the only ones at school, and instead of attending class, Principal Skidmore sends them on an educational scavenger hunt around San Francisco. After Chyna and Lexi are chosen as team captains, they pick their teams, and head off. Now, both teams compete to see who comes out victorious.

The mutants are back for Halloween and this time they meet the human versions of themselves.

After being denied an entrance to a school dance, Olive tricks Chyna into running for student council, Angus then tells her that to run for A.N.T. rep you need to participate in every school activity and Olive was the runner up. So Chyna tricks Olive into running too. Meanwhile, Fletcher feels ignored from China so then Angus then tells him in order to get a girl to like you you first need to relate with their dad. Fletcher then befriends Chyna's dad to see if he has a possibility with China but Cameron gets jealous. At the end, Cameron beats Chyna and Olive for student council and Chyna's dad starts hanging out with Cameron again

Mutant Chyna develops a forbidden crush on a boy who is human. Mutant Olive creates a duplicate of herself.

Principal Skidmore shuts off the school's Internet access so the ANTs start the ANTernet. Meanwhile, Lexi begins to get jealous of Vanessa when she is selected to model for Hippo's restaurant. When Lexi is so confused about why Vanessa is Cameron's girlfriend, she wonders if Vanessa is a vampire. Cameron won't expect it saying that she babysits,"Why would anyone hire a babysitter who's a vampire?" This is referring to Vanessa's role on "My Babysitter's a Vampire.

11 year old Chyna starts her first day at High School as part of the Advanced Natural Talents (ANT) Program. There she meets Olive (who is smart) and Fletcher (who is a good artist and has a crush on Chyna). Chyna's two new friends help her learn the ropes of her new school. But, Chyna of course doesn't fit in. So, she decides to sneak into a party and show the High Schoolers what shes got. But, Olive, Fletcher and Cameron (Chyna's brother) might ruin her chances.

After being asked out by Fletcher over and over, Chyna finally agrees.

Chyna has to keep an eye on the unpredictable Madam Goo Goo. Lexi finds out her beauty score from a famous mathematician.

After noticing that her friends have become oddly respectful of Principal Skidmore, Chyna discovers that she has been manipulating the ANTs with a frozen yogurt machine. Meanwhile, Lexi is disturbed by a recurring nightmare where she has a crush on Cameron.

A baby named Sebastian, thought to be a prodigy, is left in the care of the A.N.T.s and Chyna, Olive, Violet, and Fletcher try to uncover the baby's prodigal aptitude. They try art, music, karate, etc. Skidmore entrusts them to find its talent. But actually this was a trick Skidmore played on the ANTs.

Chyna and Lexi have crushes on the same boy. Fletcher tries to make Chyna jealous.

Chyna helps Cameron track down the model who he imagined was his girlfriend. Chyna, disguised as a model agent, gets Vanessa to date Cameron. Vanessa wants to go on a picnic in a hot air balloon. Lexi gets a new job at Hippo's new restaurant.

Everyone accompanies Zoltan to the opening of the new flagship Z-Store in NYC. Chyna connects with a street performer named Hudson, who puts on a tough guy persona to impress her. Meanwhile, Fletcher gets the opportunity to move to NY as an artist in residence at a museum.

After creating a really sad animation, Chyna advises Fletcher to do an animation on something he's familiar with, so he creates an offensive animation about Olive, making her an ant named "Pimento". It gains major popularity, and Olive is majorly offended, so she tries to offend Fletcher back, but that doesn't work out so well. After Olive issues a lawsuit on Fletcher for offending her, they go to student court, where they learn to be friends again, and start teasing Chyna. Chyna takes it okay, so they all hug and make up. Cameron joins the beauty club to keep Vanessa away from other boys, but things go horribly wrong.

It’s Halloween at Webster High School and it’s Chyna Parks’ first day in the Mutant Program, where monsters go to school with normal high school students. Chyna is Medusa so she fits right in with her new Mutant Program friends: Olive, a mad scientist, Fletcher, a vampire and Angus, a zombie. However, Lexi and the normal kids are terrified of the mutants, so Gibson pairs everybody off to help prepare for the Halloween dance.

Chyna accidentally convinces her father, Darryl, to quit his job after he tells her much he hates it. Darryl tries finding other suitable jobs, but it is no use. Chyna does not like seeing him depressed, so after she witnesses him track down the remote control very cleverly, she tells him to work as a private investigator. Plus, Chyna creates a fake crime scene at school to get his business started. Meanwhile, Lexi is horrified when she realizes that she and Paisley have the same amount of friends on Wolf Pack, a popular social network. After finding out that Cameron just signed up to Wolf Pack, they try to compete over whose friend request he should accept first in order to obtain more friends.

The A.N.T.s get their own lockers and Olive's is next to Cameron's. But, Olive annoys Cameron. Meanwhile, Fletcher goes to great lengths to impress Chyna.

The ANTS go to an Amusement Park. Lexi, Paisley, and Olive enter a doll beauty pageant. China and Cameron end up giving all of Olive's other dolls away. Meanwhile, Fletcher and Angus keep going on a ride again and again to get a good picture.

The ANTs are in charge of arrangements for the school dance. Fletcher and Chyna go together so Fletcher doesn't have to go with Violet. Meanwhile Chyna and Olive pretend Fletcher's dead to raise money for the dance by selling his paintings. Cameron looks for a date to the dance, and finds a girl who apparently likes him, too, but it turns out she was imaginary.

Chyna and Fletcher meet Zanko, Fletcher's all-time favorite artist. Zanko is having trouble with inspiration, so Chyna urges Fletcher to give Zanko one of his paintings to inspire him, but when Zanko passes the painting off as his own at his comeback party, Chyna creates an elite team to rescue the painting and gets the help of Olive, Angus, and Wacky. Meanwhile, Paisley and Lexi audition to be a princess for a kid's birthday party for Roxanne.

Fletcher asks Chyna out. Olive tells her to lie so she does not hurt Fletcher's feelings. Chyna says that she has a boyfriend so Fletcher lies and says he has a girlfriend. Olive suggests they should double date so the two must find fake dates. Meanwhile, Gibson coaches the cheerleading team because Coach Mandy died, but Lexi wants to win an upcoming cheerleading contest and thinks he is a bad coach. She fires him, and Gibson shows up at the contest with his own team.

Chyna and the ANTs are tasked with creating a special project for Black History Month. As Chyna struggles to write a song for her presentation, she decides to lock herself in a recording booth until she comes up with a great song. After accidentally falling asleep, Chyna takes a dream journey back in time where she becomes famous African American music icons from the past, Ella Fitzgerald, Aretha Franklin, and Janet Jackson. Using her dream as inspiration, Chyna writes a new version of the A.N.T. Farm theme song "Exceptional" with lyrics that pay tribute to the great women who came before her.

Olive and Fletcher exclude Chyna from their product idea. Meanwhile, Paisley gets attention from her injuries and Lexi get jealous.