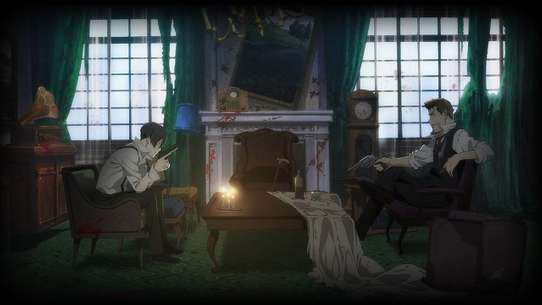 The BEST episodes of 91 Days

Every episode of 91 Days ever, ranked from best to worst by thousands of votes from fans of the show. The best episodes of 91 Days!

During the Prohibition era, in a town called Lawless, the mafia rule the streets, and the illegally made liquor flows freely. At one time Avilio lived in this district, but after a mafia dispute ended in the murder of his family, he went into hiding. Later, Avilio receives a letter from a mysterious person that ignites his passion for revenge and leads him to return to Lawless. There, he infiltrates the Vanetti family and sets about befriending the don's son, Nero.

A hard-nosed prohibition agent, Delphy, is installed in Lawless. He claims he will cut out the mafia's power in the city, and begins clamping down on bars that sell bootleg liquor. Naturally, the Vanetti family considers him an unwelcome presence. While keeping one eye on Fango, Nero comes down hard against Delphy, and Avilio stands with him. But another man watches them with complicated feelings about the situation...

Vincent has flashbacks and regrets of killing Testa, his best friend. The Vanetti playhouse, is now complete. With the playhouse is complete, Don Galassia and his nephew Strega, have been invited to form new ties between the families. The playhouse's opening the next day is wreathed in tension. And at last, the day Avilio's been waiting for has arrived...

After returning to the Lawless district seven years after the massacre of his family, Avilio gets reaquanted with an old friend and they both dive into a new way of life.

Frate's betrayal has left Nero on the run with the Vanetti family in pursuit. To save the badly injured Tigre, Nero seeks the aid of Fango, who is currently holed up on the Island. In exchange for his help, Nero agrees to bring Don Orco to Fango alive. To that end, Avilio and Nero head for Orco's base of operations, Ottimo Orco.

The Vanetti family seeks revenge after the continued compromising of their smuggling routes leads to the death of one of their young runners; Avillo moves one step closer to completing his revenge.

Having succeeded Don Vanetti, Nero decides to send a shipment of Lawless Heaven to Don Galassia to make way for the family's expansion. While the rest of the family searches for Corteo, Nero assigns Avilio to the task. He boards a boat to Chicago with his trunk. But where is Corteo? And what was the motivation behind the one who sent him the letter?

The Fango family has taken the place of the Orco family. Fango is grateful to Nero and Avilio for their hard work, and asks them to continue to work with him. But Nero is worried that Fango is going to use him and then kill him. It's then that Frate declares war on his brother, and things get to where there's no turning back. Nevertheless, Fio asks Ronaldo to make peace with Nero.

#8 - Slipping Through the Dirty Sky

The playhouse was left a blood-house. Avilio has been captured by Strega, who is thankful Avilio killed Don Galassia. All but complete, Avilio's revenge is nearly over, with the exception of Nero, who is out for Avilio now.

Avilio and Nero shake off the Orco family's assassin and continue to lie low, until Nero's regular call to Barbero reveals a new development in the conflict: Orco wants peace with the Vanetti family. Still, Barbero suggests that it might not be best for Nero to return to Lawless immediately, and tells Nero and Avilio to meet him at "the Lodge" in two days.

The identity of the traitor who leaked information to Fango and tried to kill Nero has been revealed. With Corteo taken into custody, the Vanetti family has been thrown into an uproar. But Corteo stubbornly refuses to confess anything, a fact which will likely lead to his death. Though he won't admit to it, Avilio is unusually shaken by this. And then Cerotto pays him a visit..,

#11 - Where the Footfalls Lead

Tensions reach a boiling point once the Vanetti family begin to enact their "retaliation"; Nero is given an ultimatum.

Avillo and Nero adjust to life on the run while an assassin sent by Don Orco tails the duo; Avillo notices a discrepancy between the letter and his memory of the massacre.