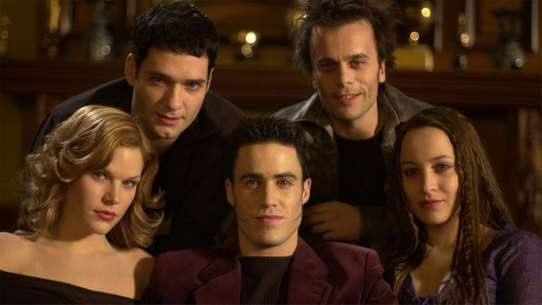 The BEST episodes of Vampire High

The world of Vampire High explores two sets of students grappling with the horror story known as adolescence. The series is set at Mansbridge Manor, an isolated boarding school that is the last-stop haven for privileged teenagers of the wealthy and influential. That's the Day School...but it's the Night School that is the real focus of the show - a Night School that secretly houses a daring experiment to civilize vampire teenagers. By nature, they are passionate and predatory but now, they've been sent to school by their Elders, and they're plenty annoyed about being guinea pigs. Fortunately for both sets of teens, they are being guided by Dr. Reginald Murdoch, a renowned if eccentric educational specialist. Murdoch is a true Renaissance Man on a steadfast mission -- guiding his charges into becoming real citizens of the world. THEME: The voiceover during the theme is as follows: "When T

Sherry mistaking believes her her old boyfriend is her secret admirer. Meanwhile, Merrill helps Drew risk further contact with Sherry when he attempts to set her straight, in her dreams. Unfortunately something goes wrong and Sherry suffers the consequences.

New vampire Marty joins the group and it doesn't take long before he's breaking the rules. Luring fellow vamps to a nightclub, Marty picks up a female human who he ends up terrorizing. Sherry and Mimi, longing for fun, end up at the same club, Drew follows her and sees Marty leave with the girl. When Marty takes her back to the school it's up to Drew to face down Marty before he kills the girl.

After Merrill realizes that her feelings toward Drew are unrequited, she sends a mental SOS message to her "maker" that she wants to leave. Enter Mae West look-alike still on the prowl. Her maker is a trashy flirt who intends to leave with Merrill.

Merrill has a psychic premonition known as a quivering, of her own death and Drew helps her see that it will be by the hands of an agent from the Biomorphic Predatory Disease Agency.

When Karl's little sister Amy visits Mansbridge on rumours that her brother's ghost has been sighted, Karl believes the best way to ease her grieving, is to reveal himself to her as a ghost, but he must decide if that is the best thing for her.

Both day and night students become curious of Dr. Murdoch - when he sleeps, what he eats. Night students wonder if he's a vampire, while the night students think he's an alien. Both mindsets are put to rest when they see Murdoch charming the special investigator, only to keep her from questioning the recent vampire attack in town.

A grief-stricken, embittered Drew embraces the dark side of his predatory nature and conjures up an ancient force to become all powerful, after the death of his beloved. Meanwhile, Dillan and Mimi meet and bond over Sherri's death.

After day student Dillan is attacked by a suddenly crazed Karl, Drew must choose between saving her life or helping her face the prospect of becoming a vampire. Meanwhile, the search is on for Bridget, the rogue vampire, and if she is not found or Dillan is "turned", the experiment is terminated.

When Karl asks Essie to acknowledge their love in a formal Declaration ceremony, Essie falls sick with a mysterious illness that proves dangerous even to vampires.

During spring break, Merrill has the school to herself, until Marty stays behind and together, they discover their blood supply is locked up. The unlikely duo go through withdrawal while resisting the urge to feed off each other but temptation arises when a day student returns early - and alone.

After Merrill is accused of a vampire attack on a day student that she swears she didn't commit, her fellow vampires stand by her but when Merrill realizes her doppelganger is the real culprit she must destroy her or be destroyed.

While pursuing their romance, Sherry convinces Drew to paint her portrait which leads to an unexpected side effect as well as the revelation of Drew's past - and true name.

An evil spirit, who is set on destroying any vampire to dare love a mortal, for she was killed by one, targets his wrath on Drew and his love for Sherry. Meanwhile, Merrill and Essie investigate the new Day School girl, Dillan, and try to determine what her story is.

When Dr. Murdoch experiences a haunting by a ghost, Merrill and Marty discover the only way to rid him of this being is by Merrill allowing the ghost to possess her and speak to Murdoch. Meanwhile, Karl helps Drew come to terms with his relationship with Sherry.

When Drew flunks Murdoch's latest blood-lust test, he's more determined than ever to prove his teacher wrong, and decides to use Sherry as his own personal testing subject. Meanwhile, Sherry helps Mimi struggle with being accused of cheating on a test.

Murdoch tries to wean the students off real-blood. Essie and Marty win a lottery to go to town to test the experiment. Drew also sneaks in. Everything seems okay until all three turn into their bloodthirsty vampire states and terrorize the town.

Karl becomes depressed and agitated, and begins what's known as the Chill. Before the group can track him down, Karl is spotted by an old schoolmate who realizes that Karl should be dead. Meanwhile, Murdoch fends off a special investigator tipped off by Malcolm, Karl's former classmate.

Drew attempts to communicate with Sherry through her Oujia board, until Marty gets up to his old tricks again. Diva Essie finds herself falling for normal looking and genuine Neil who's a human night janitor.

Essie develops a serious health problem, while experiencing the withering, a time of vampire-cellular regeneration causing her to start aging at an increasingly alarming rate. Meanwhile, Carl and Merrill desperately try to find a cure for her illness and discover that the only way for Essie to live is for someone else to die.

The Fury sends a monster to destroy the Experiment and it takes over Nick's body and captures the professor. Meanwhile, Sherry's dad visits the Mansbridge Academy.

When a new day-school student arrives at Mansbridge, Sherry quickly falls for him, causing a jealous Drew to investigate the newcomer. Drew finds that the new guy is not who he seems to be. Meanwhile, Merrill searches for her lost pet rat.

Dr. Murdock leads the night students in an ancient memory exercise that allows each one of the vampires to revisit the kill that they most regret and to let the others see it too.

Jealous over Essie & Karl's attraction to one another, Marty puts a love spell on Essie, but it may endanger his life. Meanwhile, after Merrill gives Drew a book about vampires finding love, all a hopeful Drew sees is historical proof that humans and vampires can find love together.

After being expelled from Mansbridge Academy, Drew reveals his true identity but before he can leave, mortal Sherry falls mysteriously ill and he considers turning her and taking her with him. Meanwhile, Merrill is distraught over Drew's expulsion and takes to drastic measures, and Karl finds vampire laws that could save Drew.

Evading government agents, a rogue vampire stumbles upon Mansbridge Academy and not only threatens the Experiment but selects Karl as the one she wants to turn to the dark side. Meanwhile, Dillan finds a speech written by Drew and becomes attracted to him.