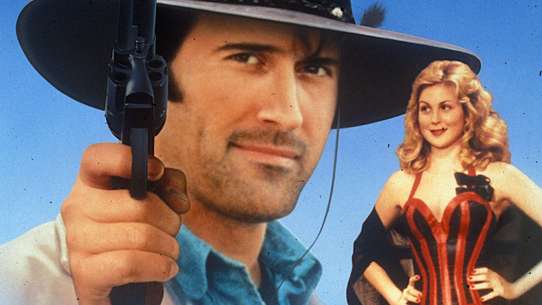 The BEST episodes of The Adventures of Brisco County, Jr.

Brisco County, Jr. is a man seeking vengeance against the man who murdered his father. He becomes a bounty hunter although he was trained as a lawyer. Unfortunately his father's killer, John Bly, has his own criminal gang to keep Brisco at bay. But Brisco is aided by his own gang of sorts: dance hall girl extraordinaire Dixie Cousins, rival bounty hunter Lord Bowler, fellow lawyer Socrates Poole and scientist Professor Wickwire. Although the series was set in the Old West, Brisco had an assortment of nifty "modern" gadgets and then there were the mysterious "Orbs" scattered about which almost seemed to have supernatural powers.

Brisco uses his favorite alias, Kansas Wily Stafford, to infiltrate the ranks of Doc McCoy, Bly gang member and ex-husband of Dixie. Dixie agrees to help with the plan.

Brisco and Bowler head to Brisco's hometown, to help Brisco's old girlfriend and her sheriff father stop a takeover of the town.

When marshal Brisco County Sr. is gunned down by John Bly and his gang of outlaws, his son, bounty hunter Brisco County Jr., comes back from the East to gain revenge on the killers.

Brisco and Bowler escape execution and go on the run, trying to prove their innocence. A super-elite tracking squad is hot on their trail.

Professor Wickwire finds an injured Brisco and takes him to the nearest town for help. The town turns out to be populated completely by women - no men and no guns allowed. Trouble soon comes in the form of the Swill Brothers.

Brisco and Socrates head to Mexico to recover some stolen guns. Brisco is in for a shock when Pete Hutter turns up as the thief, trying to sell the guns to a crooked General.

Socrates sends out an S.O.S. to Brisco when he loses Westerfield Club money to Brett Bones, a member of John Bly's gang, in a poker game. Brisco, Bowler, Socrates and Wylie set up a scam to get the money back and put Bones in prison. Dixie shows up, but is she friend or foe?

When Brisco catches a man whom he believes is a member of John Bly's gang, the man swears he is not THAT Jack Randolph. Things are further complicated when Socrates' lawyer sister arrives to defend the man.

Brisco follows a lead on Bly to the town of Poker Flats. He finds Bly, the orb, and an old friend who once left him to die at the hands of the Swill brothers.

Brisco and Bowler try to capture Blackbeard LaCutte, a Bly gang member, who has stolen all of a town's supplies, including the medicine needed to save a sick boy.

Brisco and Dixie are on the run from a hitman and his gang, who are trying to find Dixie and a vital piece of evidence she has.

Every bounty hunter in the West is after Brisco, who is wanted for a murder he didn't commit - and a VERY determined lady bounty hunter leads the pack.

Brisco and Bowler try to capture Bly gang member Juno Dawkins, and recover the prototype motorcycles he's stolen from the robber barons. Dawkins plans to use them to intercept a government wagon transporting the orb.

With a little help from his fathers' ghost, Brisco tries to rescue a boy whom he was responsible for who was kidnapped by Bly. The ransom -- Bly wants the missing orb rod. Can Brisco stop Bly and save the boy before they are all blown into oblivion.

A woman from the future aids Brisco in his final confrontation with Bly.

Brisco and Bowler come to the aid of Professor Coles, who is in possession of the orb and is being pursued relentlessly by John Bly who must have the orb at all costs.

Brisco, Bowler and Socrates attend a convention of Bounty Hunters, where the guests soon start being murdered, one by one...

Brisco is on the trail of Ned Zed, notorious bank robber and member of John Bly's gang. Along the way he runs into Frances, his old college flame.

Brisco and Bowler try to apprehend the Swill brothers, who have just stolen the dowries of three mail order brides, and who now have their eyes set on a prize bull worth $1,000,000.

After Brisco and Bowler are asked by the army to put together a team (including the Professor, Whip, Pete and Aaron Viva) to rescue a kidnapped young woman, they find that the situation is not as they were told, and soon find themselves accused of high treason. A crooked Colonel and General do their best to see that Brisco and Bowler are found guilty and executed.

Brisco and Bowler help two young heirs make their way to San Francisco to collect their inheritance. A New York crime boss sends his henchmen to steal the inheritance from them.

Hitchcockian suspense abounds as Brisco, Bowler and Whip track a kidnapped Socrates to Midnightville, a small town with some very strange residents. The clumsy deputy, Betty, "helps" them in their search.

Brisco and Bowler try to help Dixie and her sister Dolly get back the casino which was swindled away from Dolly by a mobster's son. Whip Morgan lends a hand...

Brisco, Bowler, Whip and Dixie try to protect a baby, who happens to be a future Emperor, that was left in their charge by Pete Hutter. The situation stirs up memories of his mother's death for Brisco.