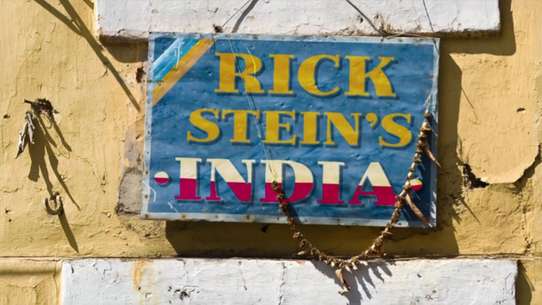 Rick Stein sets out on a journey around India to discover the different cuisines celebrated the world over.

Rick Stein arrives in the cultural city of Lucknow, reputed to be the curry capital of India and possibly the world. He explores this former Moghul stronghold in search for the best chicken korma and learns the complexities of making the perfect pulao. He is told that the food of Lucknow is the ultimate party food and joins thousands of partygoers as they enjoy one of India's major Hindu festivals. Further north in the Punjab, he observes the age-old process of making jaggery and is recruited as a guest judge to find Punjab's new 'Star Chef'. He cooks nimish from Lucknow, a dessert as light as air with hints of saffron, pistachios and cardamom and a Punjabi favourite, paneer jalfrezi.

Rick Stein discovers a five star hotel in Madurai employing local housewives for genuine home-cooked dishes and enjoys Chettinad Chicken, a dish inspired by spices brought back from both the east and the west by the local travelling merchants. He also meets India's first Masterchef winner in Lucknow to observe the making of Dum Machli, a sophisticated fish dish served at royal tables. Given the abundance of local produce and streetside markets, Rick is inspired to cook Thoran, a vibrant Keralan vegetable dish. Finally reaching the end of his journey around India, Rick hosts a small gathering of friends at his cooking bungalow to reveal the outcome of his search for the perfect curry.

Rick Stein arrives in the royal state of Rajasthan, the land of the kings. The majority of Rajasthanis are serious meat eaters with dishes like Junglee Maas, a perfect combination of meat, chillies and spices, easily accessible on game hunts - the favourite pastime of both the Rajputs and Moghuls. This is a land of palaces and hilltop forts, mostly desert and very different from the state of Himachal Pradesh, nestled on the foothills of the Western Himalayas and believed, at one time, to be the abode of the Gods. Due to its mountainous terrain the locals tend to enjoy a diet of wild herbs, rice and dried pulses - foods that can easily be preserved. Rick joins local nobility as they host a gathering in their home village and attains an audience with the Dalai Lama. He cooks a Biryani fit for a Rajput banquet and Rajma, a traditional bean dish from Himachal.

Rick Stein arrives in the southern town of Madurai in Tamil Nadu - the land of temples. Here he learns the art of temple cooking and perfects the knack of eating with his hands. He samples the famous south Indian sambar before taking a road trip across the spice laden Western Ghats to the land of coconuts, Kerala. For lovers of fish, the Keralan backwaters are the ultimate paradise and its coastline vital to the history of the spice route. Rick cooks south India's favourite dessert, payasam, and a traditional Keralan pork curry.

Rick Stein explores the melting pot that is Mumbai in search of the bombil, the fish that immortalised Bombay Duck. He also gets to enjoy Parsee hospitality and learn about their contribution to Indian cuisine. Further south in the town of Pondicherry his search for the perfect curry takes in fusion cooking as local residents cook up south Indian dishes with a French twist. In the coastal town of Mamallapuram he discovers what could possibly be the best fish curry he's ever had! He cooks the popular Parsee chicken dish Sali Murgh and a personal favourite Aloo Mattar.

Rick Stein begins his Indian journey by exploring the regions that began Britain's love affair with curry - Bengal and Tamil Nadu. The British influence in Kolkata and Chennai remains strong to this day and Rick enjoys the prominence of fish and seafood in so many of their dishes, flavoured with mustard in Kolkata and tamarind in Chennai. Exploring the eating habits of these cities is the start of a fascinating trip for Rick who is inspired to cook dishes like prawns in coconut milk and his mum's version of British Raj curry.