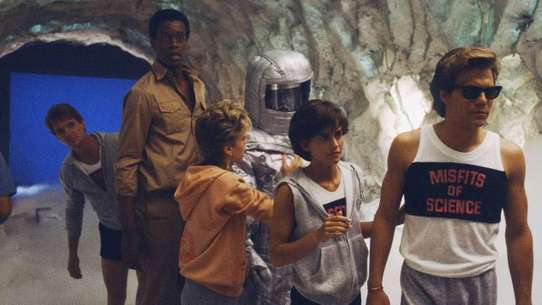 The BEST episodes of Misfits of Science

Misfits of Science was a short-lived series that followed the lives of super-powered humans and the obstacles they face in their daily adventures. Each of the humans had different superpowers, from the ability to shrink, to telekinesis, to an ice man, and during their lives they discovered and developed their powers in a way that can be used to do good in the world. Led by Dr. Hayes, a scientist from an American thinktank, the mutant misfits fought crime and through their adventures found the people they were meant to be.

A primitive in a loin cloth comes ashore at Venice Beach and no one knows who he is - in fact it's believed he may be a caveman. It turns out that the man, ""Link,"" is in fact an Aborigine from a lost tribe in New Guinea and the Misfits help him to set free the soul of his deceased child by placing a small totem on a rocket.

El goes undercover as an incredibly talented basketball player (with some help from Gloria) to expose a crooked owner who is having his players throw their games.

Gloria helps out an aspiring pro wrestler with the use of her telekintic powers without telling him - the wrestler, Milt, soon decides he does have super powers and Gloria needs to keep helping him out when he decides to go after crooks trying to sell him protection.

In this somewhat bizarre episode, Billy tries to break a record for staying awake and finds himself in an alternate reality where everyone he knows is there but in different jobs and with different personalities.

Billy and El, scientists for the Human Investigation Team, put together a team of super-powered individuals to deal with a secret government project to create a neutron bomb.

Johnny's friend Lonnie begins having premonitions of danger, but it turns out in fact he's linked to his previously-unknown twin Dwayne, a motorcycle racer, and the Misfits have to help them both out.

The bad guys manipulate the Misfits into helping them unleash a plague on L.A. with the aid of a contaminated bunny rabbit.

Gloria's pen pal Jae is the object of a hunt by unknown assailants.

#9 - Three Days of the Blender

When a blender is accidentally delivered to Billy, he ends up getting arrested as a spy and Stetmeyer gets targeted by the FBI.

Johnny's efforts to get a date with an attractive woman, Gina, go amiss when it turns out she's involved with crooks and the Misfits have to mastermind a bank robbery to help her out.

A friend of the Misfits claims to have made contact with aliens from Mars. Problems arise when the authorities try to prevent him from continuing his contact.

On behalf of a dead friend of Billy's, an archaeologist, the Misfits set out to prove the existence of buried Mayan treasure beneath Beverly Hills.

The Misfits have to help Brick Tyler, a part-bionic CIA agent who has managed to lose the ""football"" - the briefcase that the President carries that can activate nuclear war.

A marine biologist and friend of Billy's who works with dolphins believes they can talk, making him the target of drug smugglers who need the help of his dolphin friends to recover a sunken cache of cocaine.

Billy recruits the gang to help a fellow scientist's daughter defect when she and her father tour America as part of a Russian girl's gymnast team. The gang takes the place of the magician hired to perform for the tour thanks to a judicious use of super powers, but the daughter refuses to leave without her father. Complicating matter, the KGB minder Galenkov has sworn to make sure the scientist Nikolai never gets away. The Misfits have to pull off an elaborate bait-and-switch to make sure that both Nikolai and Tatyana manage to escape.

Three senior citizens end up with super-powers from irradiated hamburgers, and the Misfits have to both help them out and restrain them from injuring themselves.